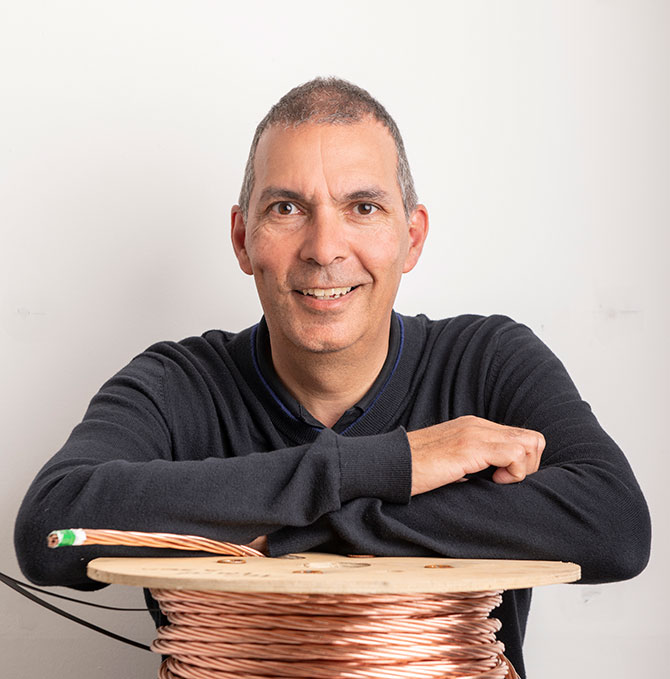 Football fanatic Kevin Sankar has a simple analogy for the art of management. “It is just like being the coach of a football team. You have to keep the dressing room onside.

“It’s about understanding individuals, knowing how to support them, guide them, develop them to maximise their contribution and also their potential.”

On that basis, Kevin is clearly a man focused on his people. He is the co-founder and strategic brains behind Worcester-based electrical contractor Rock Power Connections, a family company which has successfully grown in less than ten years into a near £10 million turnover concern, with 80 employees.

In 2015 the company, which specialises in installing sub-stations and high voltage cables to provide new connections for the distribution of electricity, was named the Hereford and Worcester Chamber of Commerce’s most promising business. In 2019 the firm was named small business of the year across Herefordshire and Worcestershire. Rock Power are clearly making all the right connections…

Kevin’s decision to branch out with his  brother in law back in 2012 with their shared business vision for Rock Power after his long career in the electricity sector has proved so successful that at the age of 54 he is able to work part-time, three days a week, leaving plenty of time for family, friends and the golf course.

It sounds an enviable mid-life position for a man who survived a rollercoaster ride back in the 1990s at the old East Midlands Electricity Board in an era of utility privatisations which brought with it continual change, restructures and buyouts. As he says today: “A lot of people resisted change… but I always saw change as an opportunity because of the very lucrative pay-off schemes and fantastic pensions which gave you security. A lot of people would look to leave so that created pathways for your career.”

But Kevin had invariably embraced change throughout his career and a lifetime in the same industry – combined with a constant desire for self-improvement through study and qualifications – enabled him to indulge a “lifestyle choice” of three days a week at the workplace by his mid-50s.

But like any successful entrepreneur – especially for someone caught up in the Thatcherite privatisations of former state-owned utilities 30 or so years ago – there have been plenty of career twists and turns along the way for the Aston Villa fanatic whose Mastermind specialist subject of choice would be FA Cup Finals post-1970 if he ever got the chance to take his place in the famous black chair.

“My dad was an electrician and he said to me ‘it is important to get into one of the banks or the utilities.’ In the early days, coming from a working-class family, it was all about stability and making progress.”

Kevin took his father’s advice and landed a role at Hinckley with the East Midlands Electricity Board (EMEB) at the age of 18 back in 1985. He was on a career path which would ultimately take him to co-founding Rock Power Connections nearly 30 years later…

Combining more than a decade of hard-earned professional experience with EMEB and constant study – including an ONC in Business Management, Chartered Institute of Marketing Qualifications through De Montfort University, Certificates and a Diploma in Management through the Open University and finally a Master’s Degree in Strategic Management, Kevin was able to climb the corporate ladder as the electricity sector threw off the shackles of state ownership and embraced a brave new world of privatisation.

“As I got older, I had so much life and professional experience and you were able to apply that to qualifications and as they got harder in theory, they seemed easier with the business experiences I had. EMEB became East Midlands Electricity (EME)PLC on March 31, 1990. There was a sell-off and they privatised all the utilities.

“The utilities used to change every 12 to 18 months. We had a re-organisation or we would get bought out…you get used to change, you have to embrace change. We went through so many takeovers, EME was bought out three times in the late 1990s.”

Using his flair for sales, marketing and commercial management roles, Kevin was on an upward career curve as the electricity industry proved a magnet for new international owners, with EME changing hands from American firm Dominion Resources to Coventry-based Powergen and later German energy giant E.ON.

“In the late 1990s, early 2000s, I got to run a construction business managing new connections. That was when my career really took off, I was running a £60 million engineering business delivering 40,000 new connections across the East Midlands patch.”

During his time with EON Kevin was involved in other initiatives and was chosen to lead E.ON UK’s 20,000 workforce on a project called One E.ON across the German energy powerhouse, which boasted a 90,000 strong workforce worldwide. The group-wide initiative would add significantly to his skills and experience at a crucial stage in his career development.

“I had to align values and behaviours across E.ON.  As part of the engagement they hired the Munich stadium for the Olympic Games and had their own games over one weekend. I had to learn to charter a jet and make arrangements for nearly 200 employees who were taking part across a number of Olympic disciplines.

In his own words, by his early 40s, Kevin had “run out of headroom” at E.ON. “I could see myself going stale. I wanted to go and do something different. I was fortunate to get voluntary severance to go and work for an E.ON supplier.

“I was  involved in an energy efficiency and renewables business – I was the commercial director based in Leicester. It was all commercial contracts and I led on carbon trading back into all the major utilities. When I joined we had around 600 employees and when I left it was well over 2,000.”

After  nearly 30 years working for large organisations in the electricity sector, Kevin’s ambition to run his own operation at last began to take shape. “I set up Rock Power in 2012. I had a phone call from my late brother-in-law Reece James who said ‘can we go into business together?’ He was a brilliant engineer but had never run a business.

“I talked to my other brother-in-law, Matt Crampton and I set the business up with my two brothers in law and over time, all our wives ended up working there.”

Kevin never had to look elsewhere for employment as Rock Power went from strength to strength. “We set up our own connections business – at that time E.ON’s Central Networks was bought by Western Power, who were American-owned.

“After a few years, I realised that we needed to diversify our clients and markets for long-term security. We had too much work with one client.”

Just as Kevin had embraced change in the privatisation era throughout the various incarnations of the former East Midlands Electricity Board, so he sought to embrace potentially lucrative new income streams for Rock Power, including the electric vehicles market.

“There has been a huge take-off providing infrastructure for electric vehicles, we are putting in sub-stations for car charging. Some jobs may be a few hundred grand, some may be more than that. Electric cars have become a key part of our business.

“We have just won a contract with Western Power to put car charging in all their 32 sites in the UK. And we have just installed the chargers at a brand new Moto site in Rugby as well as installing smaller projects at Marstons pubs and McDonalds.”

The client base at Rock Power is impressive – and still growing. In addition to Western Power, Kevin  cites working with the likes of Roadchef, Ecotricity, Shell, Gridserve and the firm has installed HV infrastructure at Aldi and Lidl. “We are growing very fast. We have a fantastic management team and I am keen to innovate, to challenge, bring fresh ideas, share passions.

“We have the most amazing and incredible employees. I feel we are doing some really good things at an exciting time. We have a good, diverse customer mix, good partners. We want to continue to grow and develop and build long-term security.

“It is about trying to stay one step ahead all the time and delivering long-term for our employees and customers, knowing about them and their families.”

At 54, Kevin can look back on his career with a great deal of satisfaction, from first climbing the ladder into high-powered management roles at E.ON. “I have worked for some amazing leaders who I am still in touch with and to whom I am incredibly grateful.”

In classic entrepreneurial style he has launched Rock Power and built a new force to be reckoned with in an ever-changing energy sector.

As he reflects today: “E.ON and the electricity industry have made me, I was very fortunate to work in that sector. I have worked with some great people and have had some great leaders. I have always surrounded myself with people better than me so I can learn from other people.

“You need to be effectively constructive, you need to encourage your team, respect people – I can spot attributes in other people. Because I am not an engineer I am always trying to understand what could go wrong, and to drive business performance.

“My career has gone better than I expected. A lot of that is because my wife Beccy has been incredibly supportive – she calls herself my ‘Home PA.’ Without her love and support, I would have achieved nothing.”

It seems that Kevin Sankar’s aforementioned formula for keeping the ‘dressing room’ onside is working a treat – both at home and at work…..