Journey of an entrepreneur from plumber to professor 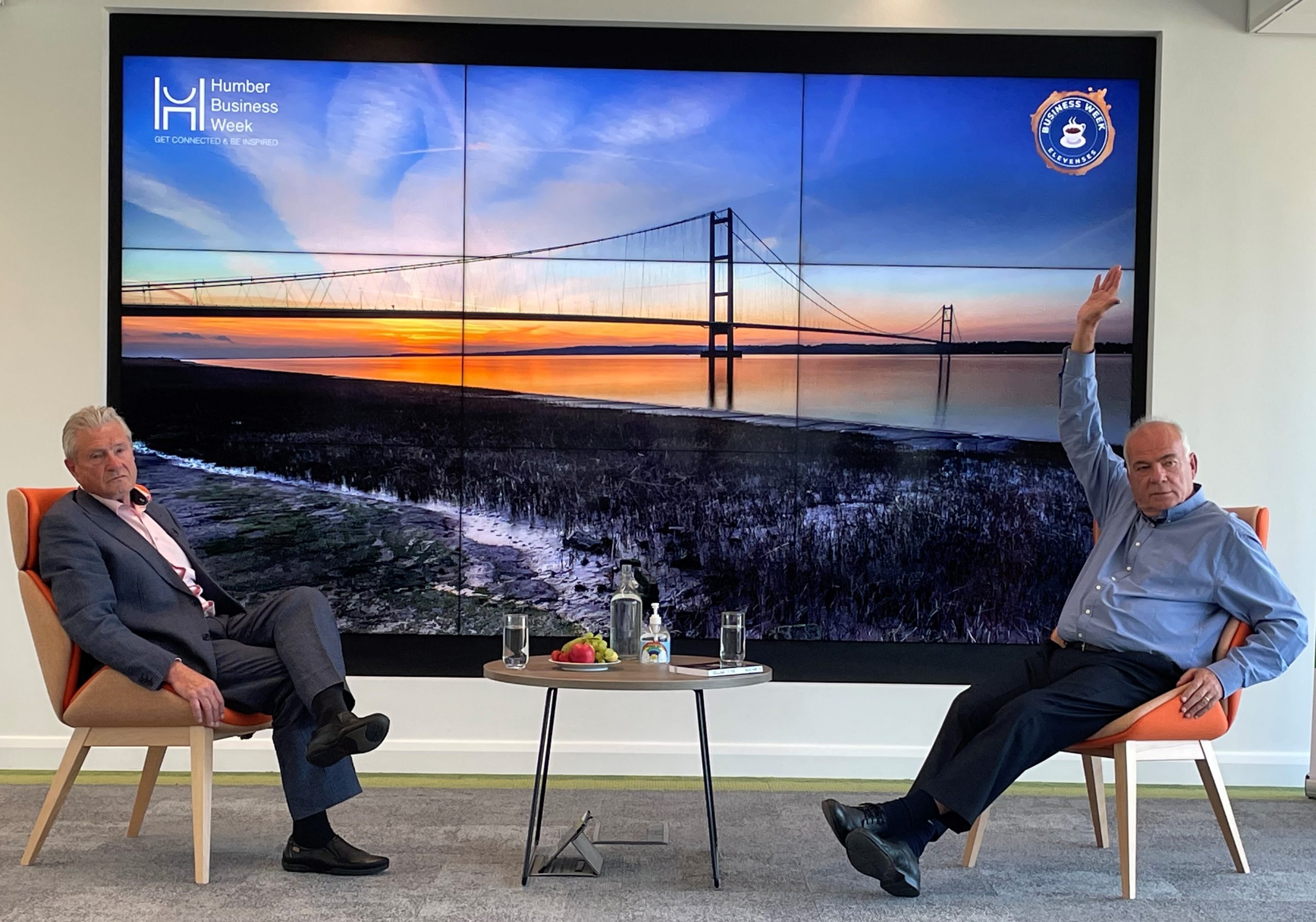 Maxims from the mouth of David Hall brought a new dimension to the Elevenses series of interviews at Humber Business Week.

If you get all the ducks in a line, the numbers look after themselves.

As the only person best known for purely business in an array of Elevenses interviewees, David stood out for his 40-plus years as an entrepreneur compared with the careers of other guests dominated by sport, law, the media and politics.

But he exuded experience as he engaged with his audience at the Aura Innovation Centre and with the interviewer – his good friend Paul Sewell – almost effortlessly, save for a good bit of arm waving.

David was born on a council estate in York. He learned a lot about religion at school but not much about reading and writing, with the result that work for him involved a day shift earning money and a night shift getting an education.

A careers adviser told him he should go into construction because he was “a big lad”. He became a “hopeless” apprentice plumber but his first mentor at work felt there was something more.

David said: “They said I had talent but they didn’t know what it was so they sent me to London for vocational guidance when I was 18 or 19 and put me through a battery of tests.

He worked with businesses and business gurus worldwide, earning a professorship at Curtin Business School in Perth, Australia. and making a spectacular difference to the bottom line of some big organisations.

His relationship with Terry Bramall, the man behind Keepmoat, began while working with a construction company and over some 25 years David helped him grow the business and sell it for around £750 million.

David said: “It was theory and practice coming together. Keepmoat became a great business because of its clear strategy and its mission to deliver community regeneration. All our competitors were builders but we introduced ‘partnering’, we were delighting customers and local authorities wanted to deal with us.

“I have worked with three great businesses – one that can out-perform the competition over a ten-year period not by five or 10 per cent but two or three fold. My favourite was Keepmoat.”

He set up David Hall Partnership and to train start-up businesses and growing businesses. It was a partnership with colleagues – about 120 of them – and customers but while making a Bafta-winning TV series for the BBC David realised he no longer wanted to run a business.

There was double disappointment as BBC top brass bagged the tickets for the Bafta ceremony and David’s attempts to dispose of the company brought a lot of hurt.

He said: “I couldn’t sell it because it had my name on so we went for a management buy-out. They wanted me to stay on but I wasn’t sure how I would feel if it succeeded or failed. It lasted about three years and I felt guilty. It was very painful.”

Putting his early academic challenges in the dim and distant past David wrote five business books, but also got the name game wrong with one of them.

He said: “Hallmark was the first book. A clever title but some of the others were not so clever. In the Company of Heroes was probably the best book but everybody thought it was about the war so no business people bought it!”

The latest book, Telling Tales, was published last year after David collaborated with a former journalist who was doing a creative writing course and encouraged him to write a series of blogs which evolved into a compilation of business anecdotes and case studies plus some key messages about how to deliver success and banish failure.

David said: “You need to separate strategy out from management meetings because short-term problems blow out the strategy. If you do the right things, you get the strategy right, the culture right, the people right and the customer service, all the ducks in a line, the numbers look after themselves.”

He also revisited the issues of his school days and the potential benefits across the board which could stem from a better approach to vocational training.

He said: “About 85 per cent of people are doing jobs which they are not suited for just to earn money. Wouldn’t it be great if everybody had the opportunity of proper vocational guidance to work out what they are suited to?

“The level of careers guidance is still about telling big lads to think about a career in the building industry. I would give everybody proper vocational guidance and I would get people in the organisation who have the ability and the will and the drive to manage professionally for the benefit of all.

“I’m not criticising managers because it’s not their fault because if somebody gets promoted into management and the role models are not there.”

But there has been significant change in other areas: “Things have moved on to identifying where a business wants to be in three or five years. When I started it was 10 years but one of the biggest businesses I worked with had a three-year plan with three things – like getting the right people on the bus in the key positions.

“When I go into a business I think I can sort it. I like it that people often come to me with hope and I like to help them grow and develop.”

Questions from the audience expanded on some of the issues around training and strategy, and also invited David’s thoughts on future plans.

He said: “I’ll keep doing what I enjoy doing. Helping businesses. I don’t think I’ll be doing any more writing but I will selectively pick some businesses. As you get older you can choose who to work with and that’s a nice place to be.”

“Somebody might discover one day I’m a plumber! Self-doubt isn’t a bad thing because it keeps you grounded but I remind myself I have had about 40 years in Keepmoat and other businesses where they have done really well.”