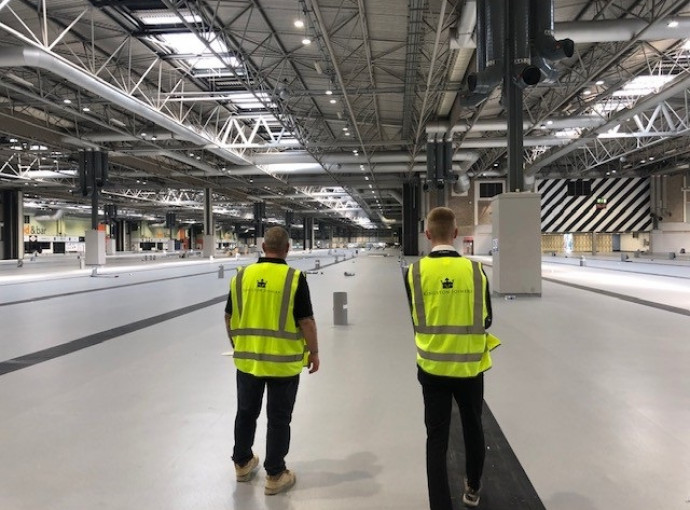 Kingston Joinery was approached by main contractor Interserve last month to work on converting the National Exhibition Centre (NEC), which is now able to take up to 500 coronavirus patients at a time should hospitals across the Midlands become full.
As yet the extra space has thankfully not been required as England has seen a steady fall in the number of coronavirus patients requiring hospital treatment.
However, Craig O’Leary (left), managing director of Kingston Joinery, says it was a project that can now form a blueprint for the construction industry to follow as workers return to sites across the country.
A team of 22 joiners spent a week on site as a total team of more than 400 civilian contractors, along with military personnel and about 500 clinical staff, were involved in constructing the temporary hospital.
New risk assessments and method statements (Rams) were explained in detail ahead of work commencing, while Kingston Joinery’s site managers conducted their own on-site Toolbox Talks to ensure all were aware of the extra measures that needed to be taken to lower risk of infection.
These included workers being encouraged to travel independently to and from site and avoid public transport, daily briefings being held only where 2m spacing could be achieved, tools only being accessible by one worker at a time from chests opened by a specific key holder, staggered break times, extensive and constant cleaning of surfaces and that all tasks were carried out by single operatives where possible.
“As a company we have completed a number of major joinery contracts for Interserve in recent years but out of all the work we have done I don’t think any have been anywhere near this in terms of significance, challenge or sense of achievement,” said Mr O’Leary.
“There was a real sense of need as we were approaching the peak of the pandemic at the time and it certainly appeared that this facility could be needed quickly – and of course it still could.
“Quite rightly all workers on site throughout the build had to follow strict hygiene rules at all times, but it was a perfect example of how major developments can be constructed safely under the tightest controls.
“That is what is going to have to become commonplace now as we all begin to return to sites in larger numbers.
“We are all aware of the need to regularly wash hands and keep social distance, but we will now all need to work to clear guidelines, specific to each site and project, on accessing and using materials and tools, the potential contamination of surfaces, working with large materials and managing unavoidable close contact carefully.
“I am proud that our team have demonstrated their ability to work under these conditions on one of the country’s most important projects.”
Teams were ‘immensely proud and humbled’ by experience
The expertise of Kingston Joinery was called on to help construct the medical bays within the facility, including fitting pattresses to bays and floors for electrics, nursing units at the ends of individual beds, handrails to ramps and pipe boxing for gas and air supplies.
Throughout the week all members of the team had to follow strict new health and safety guidelines with additional controls being put in place for working during the Covid-19 outbreak, based on Public Health England (PHE), the Advisory, Conciliation and Arbitration Service (Acas) and the NHS guidance.
Paul Bentley, contracts manager at Kingston Joinery, oversaw the firm’s work on the project and said it was something everybody was ‘immensely proud’ to have been involved in.
“We were contacted urgently by Interserve on Saturday, April 4, and required to provide carpentry and joinery services by the following Monday. There was a real sense of national need and importance and in that situation you really do have to step up to the mark.
“The atmosphere on site was very positive due to the nature of what we were all pulling together to achieve. It is very humbling when you are greeted with something on a vast scale like it was.”
In a letter to Kingston Joinery from Craig Tatton, managing director for UK Building at Interserve, he wrote: “What has been delivered by everyone working collaboratively over the last few weeks is nothing short of miraculous, and we wouldn’t have achieved this without you.
“It has been pleasing to see how the whole industry pulled together working as one to deliver what everyone thought at the start was an impossible feat. Everyone has gone above and beyond in ensuring we delivered in record time.
“Please pass on our thanks and congratulations to all your staff who worked on the project and played a part in this great success. Their hard work, dedication, and commitment is greatly appreciated.
“Whilst the project has been challenging, we have all risen to this challenge.”