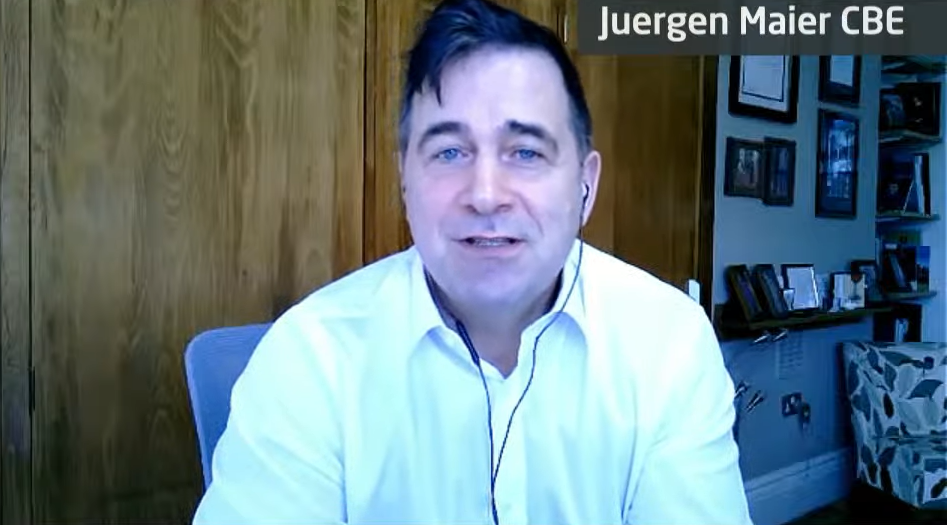 “Strong leadership, vision and confidence” will be needed for the Humber region to play a starring role in the UK’s fourth green industrial revolution.

Those were the words of Juergen Maier, former chief executive at Siemens UK, who spoke at the Festival of Green Innovation – broadcast live from the Aura Innovation Centre – on Tuesday, March 2.

The digital event – led by Aura and the University of Hull – saw a stellar line-up of speakers from across the Humber region come together to celebrate and showcase the progress made towards a carbon neutral, net-zero economy.

Professor Maier, speaking in an interview with Aura director Louise Smith, said “strong foundations” had been laid across the estuary, and it was now time to scale-up investment and put confidence in the capabilities of green innovation.

He said: “The Humber region, being at the heart of the global offshore wind industry, knows all about the technology needed to generate power in a green way.

“We are now also moving forwards, beyond offshore wind, and looking at other emerging technologies. Particularly interesting for the Humber region will be green hydrogen.

“We have laid strong foundations through places like the Aura Innovation Centre and the Humber region’s various catapults, and have made huge strides in green engineering.

“It is now up to civic leaders, national politicians and businesses to show the leadership needed, and create a fourth green industrial revolution.”

The Festival of Green Innovation, hosted by BBC Radio Humberside Breakfast Show presenter Kofi Smiles, showcased how the Aura and university network of enterprise and innovation brands were supporting low-carbon business innovation, and working with the region’s SMEs to reduce their carbon emissions.

The creation of green jobs and skills in the Humber region took centre stage.

Emma Hardy, Hull West and Hessle MP, and shadow minister for further education and universities, said at the festival: “Hull and this region has always been built around water and the port. People for generations have looked out to sea and seen ships – now you also look out and see huge wind farms generating clean electricity.

“The Humber region will be at the heart of the country’s green energy generation, and for that to happen, we need the right people with the right skills.

“The future is bright – I am so optimistic about this – and young people are so engaged and interested in climate change and the environment.

“It is about harnessing all of that, and creating a prosperous future for this region.”

The TV-style event also heard from Aura director Louise Smith, For Entrepreneurs Only chief executive Jan Brumby, and a host of SME business owners and those providing business support from across the Humber region.

One segment of the festival saw contributions from influential regional leaders, who discussed the Humber’s extraordinary contribution to innovation and the need for concerted action to ensure it thrives and harnesses the potential of creativity.

Andy Parkinson said: “The Humber region is one of the highest-emitting carbon clusters in the country. Across the world, ports and estuary regions are at the centre of this global challenge.

“You will not solve climate change without solving the challenges faced by the Humber region. The jobs will come around green energy, I am confident of that, but we need to make sure we ‘put the ball in the back of the net’ and make it happen.”

Phil Benson (right), whose career kick-started when he co-founded Xing Smoothies in 2006, spoke passionately about putting the Humber region on a national pedestal.

“We have so much focus on London and what is going on there, but we must remember the value of the Humber region and what it can bring to the country economically is huge.

“Where are our next innovations going to come from, and what do we need to do to make sure we have a competitive advantage over other regions?

“We must find a way to use the Humber’s natural resources, and our location, for the benefit of all.”

The state-of-the-art facilities at the Aura Innovation Centre, ranging from 3D printers to the most powerful microscopes in the region – also went on show.

SMEs from across the Humber shared their own stories of how the team at Aura had helped drive their business forwards, laying foundations for them to thrive and prosper in a low-carbon future.

Lloyd Atkin, managing director at The Bio-D Company, said: “Previously, when looking for lab space which met our company’s needs, we have had to go as far afield as France.

“After meeting Louise Smith at Aura at a Make UK event, and discovering what Aura and the AIC had to offer, it has been so refreshing to see these facilities available in the region.

“There is a great appetite for collaboration in the Humber, and the AIC is a fantastic facility with great people working inside it. We are now working together on all sorts of projects, and I would urge any business to get in touch with the team at Aura.”

The Aura Innovation Centre is funded by the European Regional Development Fund (ERDF) and led by the University of Hull.

Prof. Lea said: “The Festival of Green Innovation is a really exciting concept which aims to showcase the University’s impact and role in the Humber region around clean growth.

“Importantly, it also aims to shine a light on the SMEs we have in the Humber, who are the backbone of our regional economy.

“Through Aura, we aim to support businesses from across all different sectors. We can provide advice and guidance on the various funding streams which may be available to you, and provide access to our host of academics, allowing us to work together to solve some of the challenges your business may face and create a low-carbon future.”