Humber has ‘crucial part to play in building Northern Powerhouse’ 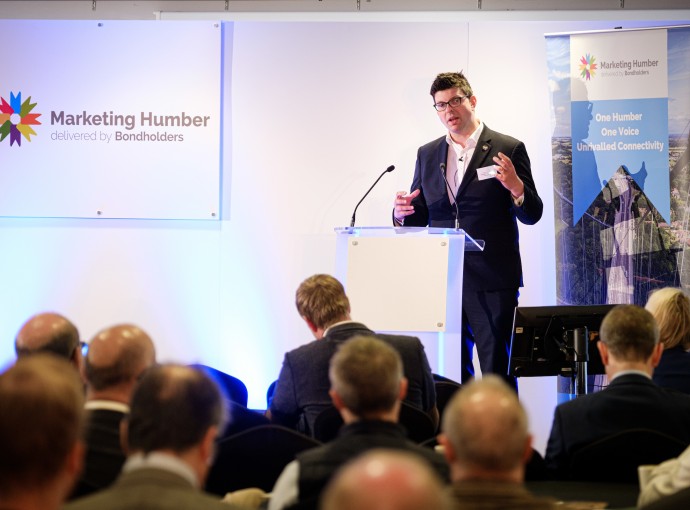 More than 250 delegates at an event staged by Marketing Humber were told how the estuary was uniquely positioned to contribute to the growth of the north and become a global leader in combating climate change.
Entitled “Power in Partnership”, the event at Hull’s KCOM Stadium launched Humber Business Week, the region’s annual, week-long celebration of enterprise and innovation. It focused on the Humber’s contribution to the Northern Powerhouse and how partners were working together to drive forward a successful and sustainable economy.
The event featured a filmed introduction by Northern Powerhouse minister Jake Berry highlighting the Humber’s crucial role in building the Northern Powerhouse.
“We acknowledge the unique contribution the Humber estuary is making to our clean energy and growing that sector of our economy,” the minister said.
“That’s why I want you all to take this opportunity to come together, network together and talk about how the Humber plays its crucial part in delivering our Northern Powerhouse.”
Marketing Humber chairman Andy Parkinson opened the event by hailing the strength of partnerships across the region, including Marketing Humber’s work with the University of Hull and other partners on the Waterline campaign to place the Humber at the forefront of the global fight against climate change.
Mr Parkinson said the region was now building on its established status as the UK’s Energy Estuary and a leading hub for renewable technologies.
“Going forward this is about an evolution of the Energy Estuary. There are bigger opportunities for the Humber to evolve into what I would call an energy eco-system,” he said.
“As well as decarbonising electricity, clean power will drive innovation across the agricultural sector, manufacturing, transport and so on. It’s vitally important that we capitalise on these opportunities.
“Demonstrating how to make the transition to a low-carbon economy is a vast opportunity for the Humber and that’s what we’re trying to unlock with the Waterline and our partnership with the University of Hull.”
Mr Parkinson also announced that Marketing Humber had become a Northern Powerhouse Partner Programme member and introduced Henri Murison, director of the Northern Powerhouse Partnership to underline the vital contribution of the estuary.
Mr Murison said the Humber was critical to the growth of the north and to rebalancing the UK economy.
“I often reflect when talking to business people in other parts of the north just how compelling the proposition is here in the Humber to grow the northern economy,” he said.
“Particularly when you think about energy, which is one of the prime drivers of the northern economy, alongside advanced manufacturing, health and digital, the reality is that you couldn’t have a Northern Powerhouse without the Humber.
He added: “The decarbonisation agenda has led to a reinvention of this place. This city and the wider Humber are thriving as a result and that’s a testament to the ambition and the work of many people in this room.”
Andy Koss, chief executive of Drax Generation, outlined the vision to create a UK first “net zero” carbon cluster in the Humber, anchored by Drax Power Station, which is now Britain’s largest renewable generator.
He said Drax Group had invested £1bn to convert from coal to sustainable biomass and was now trialling the capture of carbon emissions from bioenergy. That trial is aimed at paving the way for the creation of a carbon negative cluster, enabling businesses across the Humber to reduce or eliminate emissions.
Mr Koss said: “We can do this. We can effect a major transition. We can re-skill. Now we’re at the point in the journey where there is a fantastic opportunity ahead of us with carbon capture technology.”
He added: “The UK is the second fastest decarbonising economy in the world. We should be incredibly proud of what we have achieved, both within the region and nationally, and there are a lot of lessons that we can share with others around the world.”
Beckie Hart, regional director, Yorkshire & the Humber, for the Confederation of British Industry (CBI), said partnerships at all levels were vital to achieving the region’s ambitions.
She said: “This region has a huge potential to lead the transition, with our wind resources, our potential for carbon capture and storage, our hydrogen use across different sectors, our sectoral strengths, position as a trading estuary, academic resources and support organisations.”
The Marketing Humber event also heard how small and medium-sized companies could all contribute to the climate change challenge.
Hull-based the Bio-D Company develops and sells green cleaning products and promotes environmental sustainability in everything it does.
Sales manager Emily Gallagher urged delegates to “look everywhere, involve everybody and never stop doing it” to ensure their businesses were playing their part in saving the planet.
“There are things that you can all do today that will benefit your business and have a net benefit on this area,” she said. “We’ve all got the power to do something to a make a change.”
The Business Week event brought further focus to the Waterline campaign, launched by Marketing Humber and the University of Hull, to promote new economic models that demonstrate how decarbonisation can deliver both environmental sustainability and economic growth.
The Waterline campaign will also be promoted strongly at Humber Business Week’s closing event, the Business Day at the Spa, Bridlington, on Friday, where Marketing Humber is collaborating with the University of Hull and Yorkshire Water to showcase the Humber’s decarbonisation credentials.