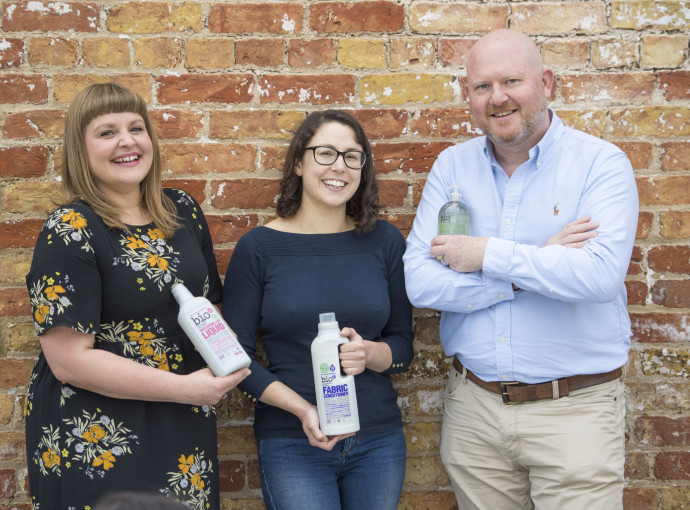 Independently owned ethical cleaning company Bio-D signed up to the Ellen MacArthur Foundation’s Global Commitment on plastic in October last year. As part of the commitment, companies across the world pledged to use an average of 25% recycled content in their plastic packaging by 2025.
However, Bio-D set its own higher target of 75% – which has now been reached after making the switch on lines from spray bottles to small refill containers.
The recycled packaging can then be used, refilled or recycled once again as part of the Ellen MacArthur Foundation’s vision to keep plastics in the economy and out of the environment.
Lloyd Atkin, managing director of Bio-D, said: “Shocking images of waste in our oceans shown by programmes like Blue Planet have really highlighted the scale of the plastic problem facing our planet, and this has helped drive demand for change from the public.
“As an ethical business that has been working to offer consumers a naturally derived alternative to regular cleaning products since 1989, it’s always been our ethos to create products that are safe for both the environment and user and that goes so much further than just the ingredients that go into them.
“Alongside our promise to only use ethically sourced ingredients which are vegan friendly, cruelty-free and have full traceability, the majority of our packaging is now made from plastic waste which might otherwise have gone to landfill.”
Bio-D joined major companies from around the world – including Carrefour, Colgate Palmolive, Danone, and the Coca-Cola Company in signing-up to the foundation’s commitment, launched in collaboration with UN Environment.
Together, they represent more than 20% of all plastic packaging used globally. Now, one year on from the launch of the commitment last October, and the Ellen MacArthur Foundation has reported promising early progress.
More than 400 organisations have now committed to eliminating problematic and unnecessary plastic packaging and innovating so that all plastic packaging is 100% reusable, recyclable or compostable and can be safely and easily circulated without become waste or pollution.
“We believe we are setting an example to other businesses which is why we not only signed up to the Ellen MacArthur Foundation’s commitment, but also set ourselves much tougher targets which we have now exceeded,” said Lloyd.
“The question we have for other companies is if we can do it, why can’t they?”