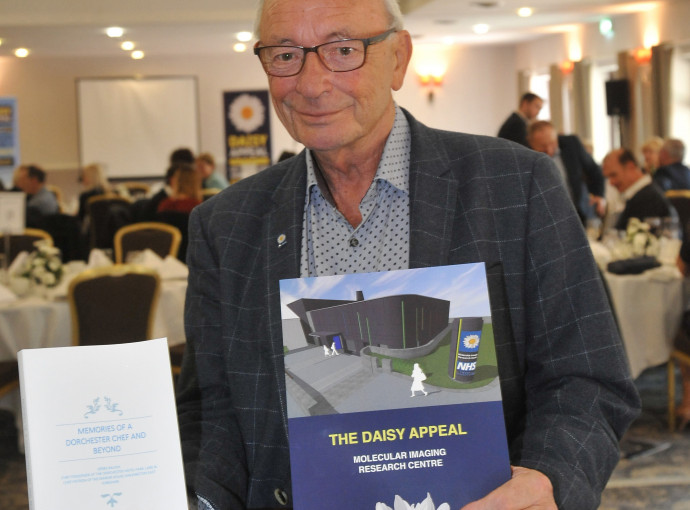 Derek Baugh, who won acclaim as managing director of Willerby Manor Hotel and as owner with his wife Lee of the renowned Manor House Hotel in Walkington, will celebrate the broadcast by ordering a reprint of Memories of a Dorchester Chef and Beyond to raise more money for the Daisy Appeal.
World’s Greatest Hotels will air on Channel 5 at 10pm on Friday, January 31. The series, which has featured such iconic hotels as the Balmoral in Edinburgh, Raffles in Singapore and Caesars Palace in Las Vegas, will focus on the Dorchester, where Derek worked as commis chef and chef poissonier.
The programme’s researchers tracked Derek down to his home in Beverley after reading the book that he published in 2018.
He is sworn to secrecy about what he told the interviewers, but he hopes the broadcast will generate more interest in the book, which has already brought in more than £6,000 for the Daisy Appeal from sales and a lunch with Derek at Tickton Grange Hotel.
Derek said: “I don’t know how they heard about the book but they Googled me and sent me an email and we picked up from there. We met at Marylebone Town Hall a few weeks ago and I was filming for about two-and-a-half hours.
“I’m not allowed to reveal what we talked about and I haven’t seen the finished product anyway, so like everyone else I’ll be watching with bated breath to see how it’s turned out. Hopefully I won’t blink and miss it!
“Given the renewed interest I decided to get another 100 copies of the book printed and with luck maybe enough people will want to buy a copy to support the Daisy Appeal and to find out the rest of the story!”
The book is written in the style of the laid-back, convivial and occasionally disjointed after-dinner chats which Derek and Lee used to enjoy with guests over a glass or two after service.
It develops into a fascinating collection of cooking tips, social history and random ramblings as it tells of Derek’s unglamorous upbringing in North Wales, his first venture into catering at the age of 13 in a fish and chip restaurant and his move to the Dorchester in the 1950s.
He arrived in Hull in 1967 to teach at the technical college and three years later joined the Townend Group under John Townend, the former MP for Bridlington. He developed Willerby Manor into a destination venue for dining and functions and worked with Lee to convert a tired country house, Northlands at Walkington, into the award-winning Manor House.
Claire Levy, fundraiser at the Daisy Appeal, said: “Derek’s book is a fascinating record of his remarkable career and we’re delighted to see it has helped him to gain national recognition for his achievements.
“Many people in Hull, East Yorkshire and further afield will remember Derek and Lee from Willerby Manor and the Manor House and we hope they will be tempted to buy the book. Demand has continued since the first print run sold out and we’ve even had some people returning their copies to be re-sold, so hopefully the new print run will be welcomed.”
The Daisy Appeal has a target of £8.2 million to complete a radiochemistry and cyclotron unit which will produce radioactive tracers at Castle Hill Hospital to improve accuracy and detection rates for cancer, heart disease and dementia in Hull, East Yorkshire and North Lincolnshire.
The new facility will provide the opportunity for patients to receive more personalised care, leading to earlier diagnosis and giving them better treatment and quality of life.
Once the facility is fully functional patients from a wider geographical area will have access to its services. The charity aims to play a leading role in clinically relevant PET-CT research over the next two decades and to show that the technology can be brought to the individual patient, quickly and effectively.
Copies of Memories of a Dorchester Chef and Beyond are available now for £10 with all proceeds going to the Daisy Appeal. Postage is £1.99. To order a copy please email Derek at [email protected]
To find out more about the Daisy Appeal, visit daisyappeal.org