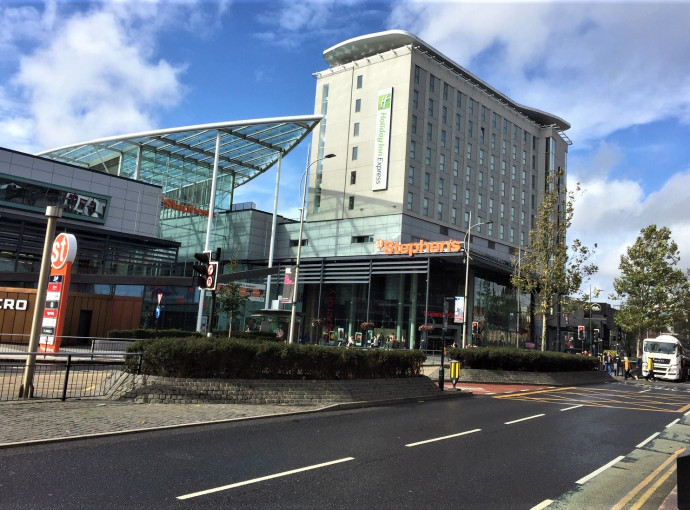 The Holiday Inn Express in Ferensway will embark on the refurbishment of its reception, bar and lounge areas with completion due by March 2020.
The project was announced by the hotel’s general manager, Debra Hutchins, as she welcomed guests from the city’s business community to view the improvements that have already taken place, bringing a new look to the 128 bedrooms.
Debra said: “It’s great that on the day we have invited businesses from around Hull to look at the improvements to the bedrooms we are able to confirm that we have been given the go-ahead for the next phase of improvements.
“The company has approved the investment for everything we were hoping to do and the result will be a completely new look for the reception, the bar and lounge and the breakfast area. We’re working on a start date now but the aim at this point is to have it ready by March next year.”
The Holiday Inn Express opened in 2007, soon after the adjacent St Stephen’s shopping centre. It employs 32 people and doesn’t serve lunch or dinner but, as one of the biggest bed and breakfasts in the region it provides welcome business for restaurants, pubs and café bars in the city.
Kathryn Shillito, executive director of HullBID, said the hotel also had a high “Hullness” factor which added to the appeal for its growing number of regular guests.
She said: “It’s right next to the transport interchange and has the benefits of the St Stephen’s car park literally on its doorstep, so it’s in a perfect location for people travelling to Hull. It also has great views across the city skyline, especially from the upper floors. The hotel will act as a feeder for other restaurants and places to eat and drink in the city boosting the economy further.
“The conference rooms are named after Hull legends Lord Prescott, Amy Johnson and Clive Sullivan and the staff bring a real family feel, which isn’t surprising given that so many are related, with a husband and wife behind reception, a housekeeping team which includes a mother and son and two sisters and another mother and son in the kitchen.
“Debra reports high occupancy levels and this investment can only improve on that. The better the hotels in Hull, the more likely people are to turn a day trip into a weekend visit or mini-break because word is now getting out that there are so many great things to do and see in Hull.”
Debra, whose sister Alison Mackenzie is the hotel’s sales and business manager, added: “Our refurbishment was due for 2017 but we put it back because we were so busy with City of Culture so we are excited it’s upon us now.
“Occupancy levels during the week are high and again at the weekends when there is an event on in the city centre. City of Culture year itself was amazing and a lot of people have been back since. People who came on business have returned with their families.
“We get a lot of people staying here who used to live in Hull and have returned for a look round or to visit friends and they always say how much it has changed. They remember things like Bob Carver serving fish and chips from a stall on the market and they tell us how City of Culture has changed the perception of Hull. People started coming back because they realised there’s a lot to do.”
Guests at the event included representatives from a wide range of businesses and organisations, including many working in the tourism and culture sectors.
Anthony Yates, head of visitor destination at Visit Hull, said: “We were excited when we were invited for a tour of the refurbished bedrooms and it was fantastic to arrive here and to learn about the future investment. It’s great for the city and the region to see major companies investing to improve the visitor offer in Hull and East Yorkshire.”
Janthi Mills-Ward, executive director at Hull Truck Theatre, said: “From our point of view it’s great to have a major hotel group right next door which is investing in high quality, affordable accommodation and adding to the attractions for people visiting our city.”