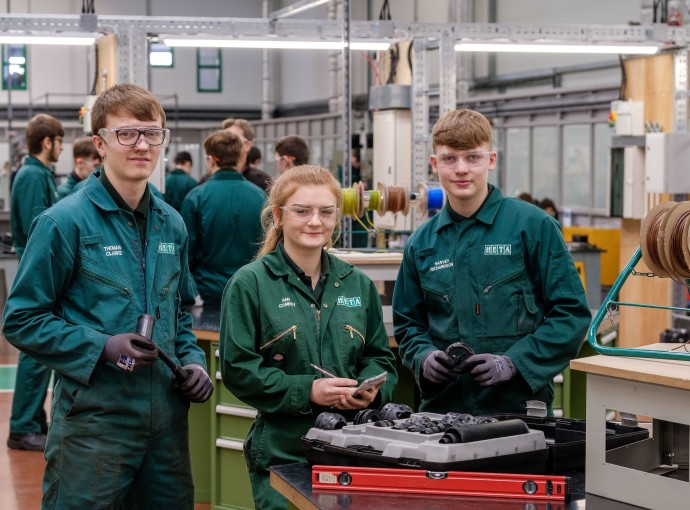 A charity that was formed nearly 300 years ago to teach skills including sewing, knitting and even spinning is now funding young men and women as they embark on careers in engineering.
The Ann Watson Trust, which in 1720 was set up to prepare young women for the demands of domestic service, is supporting apprentices during the first year of their training at Humberside Engineering Training Association (HETA).
Six young learners at HETA, itself a charity dating back more than 50 years, have been selected to receive grants that were offered after board members from the trust paid a visit to the engineering workshops in Hull.
Tony Dunn, chairman of the trust and a former chemical engineer with BP at Saltend in Hull, said: “Mrs Watson herself was a teacher and, in those days, there wasn’t much employment other than on farms and in domestic service. Education has always been part of the trust’s remit.”
Iain Elliott, chief executive of HETA, said: “We have a very high success rate when it comes to securing sponsorship for our young learners from engineering businesses but this is a bit different. It shows how times have changed and it is very welcome because it makes money less of a worry for the apprentices.”
Ann Watson set up the trust in her will in October 1720. According to the archives at Hull History Centre, she was married to the Rev Abraham Watson, the vicar of Hedon, and had four children.
Described as “a woman of means and property”, she left instructions to provide accommodation and “relief in need” to widows and unmarried daughters of Church of England clergymen.
Her own home, the White House in Stoneferry, Hull, was given over to house four clergymen’s widows or daughters and to provide a school, complete with a live-in schoolmistress, to teach sewing, knitting and spinning to 10 poor girls from Stoneferry and Sutton.
Hull History Centre reports that, in July 1800, six trustees were appointed, including the vicars of Sutton, Hedon, Holy Trinity and St Mary’s in Hull. The charity developed “through careful management”, selling five fields on the north side of Holderness Road in 1884. They were purchased by the Hull Urban Sanitary Authority for 16,909 pounds, seven shillings and sixpence and formed part of East Park.
In 1866, land to the value of 378 pounds 16 shillings and threepence had been taken following the Hull to Hornsea Railway Act, with that money invested in other sites for the trust.
Tony Dunn added: “We are a fairly small charity with an annual income of around £350,000, and we have many calls on our money from things like farm repairs and the maintenance of the 11 apartments we provide for widows and unmarried daughters of clergymen.
“We also do a lot of educational work and have supported engineering before but mainly at degree level. We used HETA all the time that I was at Saltend and when I heard they had moved to new premises we arranged a visit. We were very impressed with the staff and the facilities, the opportunities that they provide to advance all the way up to a degree, and the discipline. The apprentices were equally impressive.”
The recipients of the trust’s awards – five young men and one young woman – were selected by the HETA management team after an application and interview process that challenged the apprentices on why they had applied and what they would do with the money.
Harvey Richardson said: “I see this as the next step to getting a job. It shows that we are capable of being sponsored by an employer.”
Amy Conroy said: “In the interview I spoke about my dad being and engineer and telling me about it. Now I plan to put the money towards my travel costs for getting to HETA from Bridlington and towards buying a car.”