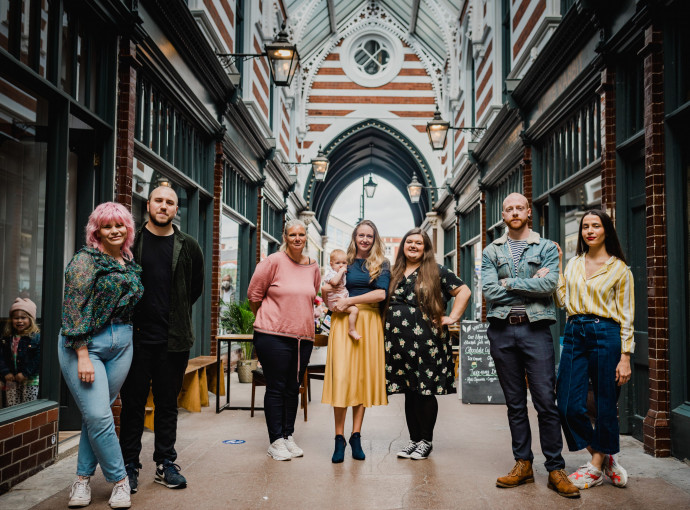 Paragon Arcade has welcomed a tattooist, a niche and upmarket stationery shop and a milk and cakes outlet as new businesses. A brow bar was poised to complete the set but must now wait after the Government announced a delay for that sector 24 hours before the planned opening.
The lettings mark a major milestone for Allenby Commercial, which bought Paragon Arcade in the autumn of 2017 and has since been working on a restoration programme, creating business units and building a community of like-minded traders.
Georgia Allenby, design and marketing manager at Allenby Commercial, said: “We have always had a passion for Paragon Arcade and we became aware very quickly when the previous owners decided to leave. By selling to us, they passed it on to another family business and we embarked on a tasteful and stylish development to bring something unique to the city centre.
“We have upgraded the units and made them suitable for small, independent businesses which each bring something different. We have also selected the tenants very carefully to make sure they complement each other in terms of products and the character of the individuals.
“We are thrilled with the outcome and with the fact that all the units are now occupied. We have been talking to people who have been coming here for 40 years or more and nobody can remember Paragon Arcade being full in all that time!”
Paragon Arcade was built in 1891 by Sir Alfred Gelder but as occupancy dropped to about 50% in recent years Allenby Commercial moved in to invest and to innovate.
Some businesses left, with Segal’s jewellers relocating much of their business into a new flagship store in an adjacent property also owned by Allenbys. New arrivals included Marla’s Deli, The Hispanist restaurant (pictured left with Alex Spurr and Nick Hill), Milk hair salon, Belle and Benjamin babywear, Koda Interiors and Homestead Store. PJ Barbers and Flower Corner have been there since long before the arrival of Allenby Commercial.
Two Gingers Coffee House had a makeover and White Rabbit Chocolatier added a first-floor café. When the arcade reopened after lockdown it unveiled Nordic Rosie selling homeware and nursery items and Out of the Attic Music, selling music memorabilia, CDs and increasing amounts of vinyl.
Last weekend Ben Middleton opened his Three Blind Mice tattoo parlour. This weekend Rebekah Suddaby and Aaron Crossland will open Milchig, selling things made with milk – ice cream, cakes, cookies and brownies all made on the premises.
Lucy Rose, Caroline Hawksford and Shannon Bean – the family team behind Nordic Rosie – will soon open Paper Rosie, selling an array of quirky and stylish stationery, cards, paper and prints.
Elena Georgiou, partner of Ben Middleton, has been waiting to open her Neon Velvet brow bar since March and is now eyeing a new date of August 15  after the Government’s latest intervention.
She said: “The announcement came less than 24 hours before I was due to open and it left me and the rest of the industry in absolute bits. I had to start rebooking almost 150 clients and we still only have a suggested date.
“But it’s an amazing unit and Ben works upstairs. We have wanted to be in here ever since we saw the arcade. We talked about it one day when we were in Marla’s and we were over the moon when we managed to get a unit because it’s such a special part of the city.”
All the new businesses have their own stories of Paragon Arcade connections. Caroline Hawksford had wanted a shop there since she was a little girl. Aaron Crossland used to work at Two Gingers and Rebekah Suddaby worked at Marla’s and supplied Two Gingers from her own business, Hello Baker Girl.
Ben and Elena got to know the other businesses well from attending After Hours, the monthly food, drink and entertainment events that Allenbys organises to promote Paragon Arcade to customers and to its own community.
Georgia said: “All of the businesses are masters of their trade and genuinely passionate about their shops and products. The synergy between the shop owners and ourselves is creating a buzz down the whole arcade and surrounding area.
“We’ve all worked hard during lockdown to make sure the businesses are ready and have put in place Covid-19 precautions throughout the arcade and now we’re waiting for the final pieces of the jigsaw. Elena is ready to launch Neon Velvet as soon as the Government gives the go-ahead and we’re looking forward to the day when we can resume the After Hours events which are so great for bringing people together and reintroducing people to Paragon Arcade.”