HETA old boy urges apprentices to aim for the top 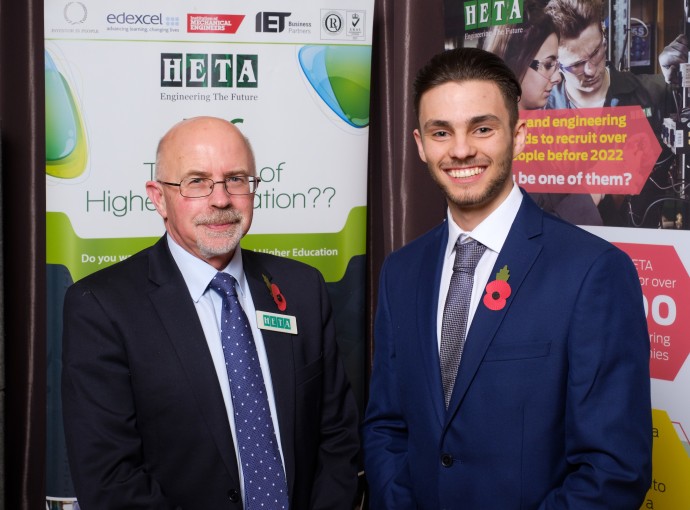 Humberside Engineering Training Association (HETA) welcomed back a former learner who is now making his mark in industry as they celebrated the achievements of their latest crop of apprentices.
Chris Sadler addressed an audience from HETA’s sites in Stallingborough and Foxhills and told of the progress he had made since he attended a similar awards night four years ago. He now works as a control and power technician at Total Lindsey Oil Refinery, where he won the apprentice of the year award and now has the opportunity to work towards a degree.
Chris told the audience that their presence at the awards was success in itself, but he urged them to aim higher. He also spoke of the need to overcome setbacks and revealed that he was rejected by HETA first time around.
He said: “To say I was devastated and lost is an understatement, but I took this as a message and a reason to work harder than simply give up, and two years later I reapplied and by some miracle obtained a sponsorship by Lindsey Oil Refinery.
“The initial setback allowed me to see the value of the opportunity you all have. You are at the beginning of what I hope will be fruitful and rewarding careers within engineering and industry, and that is something hundreds of others in your application year alone wanted, not even considering the thousands in previous years that all applied with the same hope and ambition you all had. Be proud of yourselves for getting where you are and be excited for where you can be in the future.”
Chris acknowledged the inevitable nerves that strike apprentices as they take up their roles with employers, and he highlighted the part played by colleagues, mentors and managers as they become the biggest advocates for success.
He also turned advocate himself as he underlined the benefits of continuing to study all the way to degree level.
He said: “I completed two Higher National Certificates and am now studying at university. I used to hate the idea of anything academic but I can safely vouch for the advantages it brings and the bonuses it will add to your career.
“I worked hard to attain the things I did and always tried to achieve my best. I also had an excellent support network around me especially from my personal mentor.
“I am by no means the best at what I do – the list of stupid mistakes I have made, especially during my training is probably endless and there are without a doubt people in this room much more capable and much smarter than me. There is no reason at all why any of you can’t and won’t have the same opportunity and achieve the same things that I have, if not greater.”