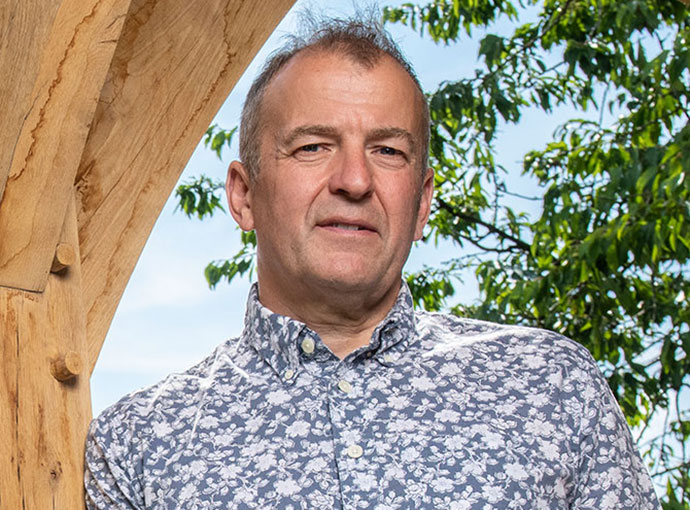 Ask any entrepreneur why they think people find them inspiring and, unless they were Richard Branson or Elon Musk, you’d generally expect them to bat the question away modestly.

Still, I asked Neil Hudgell anyway. And he did just that. But he answered it in a roundabout way after suggesting I rephrase the question a bit. “What do I see in myself that are good traits and characteristics? I suppose I’d say it’s my work ethic. I always say this to my kids – if you work hard, and do something that you enjoy, you’ll get there. Also, stick to what you know. I think I’ve found what my strengths and weaknesses are – I know what I’m good at, and if I’m not good at something, I know where to go to find the people who are.”

However, it took Neil quite a few years before he realised that law was what he was good at; growing up in a working-class family in east Hull, he had no aspirations to be a lawyer. “I was the first in my family to go to university and get a degree,” he says, “but I failed at 18. I stayed on at sixth form at Andrew Marvell, and essentially discovered drink and partying. I ended up working for the Department for Work and Pensions, which was a job that I very quickly realised didn’t have great career prospects. So I saw the light, and went to night school to study a law degree – which, back in the 1980s, was seen as a bit of a glamorous extension to the traditional curriculum. I found that I had quite a natural aptitude for it, and followed my degree with a masters in criminology.”

Neil started out working for Max Gold, one of Hull’s best-known solicitors and another hugely inspirational character who represented the families of the Gaul trawlermen in 1974, and went on to become chairman of Hull Kingston Rovers, as, of course, would Neil himself – but more of that later. When Max died suddenly in 2017, Neil paid tribute to “a man with a kind heart, who helped anyone and everyone”.

Max’s entrepreneurial spirit clearly rubbed off on Neil, as it wasn’t long before he set up his own practice. “Because of the sort of character I am, I was never really going to work for anyone longer than I needed to,” he says. “You have to do three years’ work for someone else in the law game before you can start your own practice, and when I reached that point, that’s what I did.”

There’s a wealth of difference between being a lawyer and running your own business, though – what was the real driver behind going it alone? “I think it’s basic aptitude, or basic mindset,” says Neil. “I see a lot of lawyers who are good lawyers but don’t make great businesspeople. It’s as much about securing your client’s confidence as it is doing casework; it’s a service industry, in the main. And you have to sell yourself as extremely competent, because it’s usually a distress purchase. You don’t go looking for a lawyer unless you need one.”

Neil says he was fortunate that, just as his three years was up, he was offered the chance of acquiring three branch offices that his previous firm had been advised to offload. “It was either that, or the dole queue, so I took the choice of acquiring these offices, with about 10 staff, and about 800 clients. The good thing was that it gave me a ready-made cash flow, so I was not quite hitting the ground running, but hitting the ground jogging, at least. A lot of things in business are driven by timing and good fortune, but I agree with the adage that you make your own luck. I used to graft really hard for that business, and I think that’s why I was offered the opportunity.”

When Neil first started in the industry, he covered all aspects of law, but he later chose to specialise in personal injury law. “It’s fair to say there were some things I just didn’t like,” he admits. “I didn’t really like any of the commercial stuff; I wasn’t greatly enamoured with conveyancing, crime didn’t really pay, and family law was just people whinging! At the time, there were some major regeneration projects going on in North Hull Estate, where I had one of my offices, and there were a lot of building accidents. I saw very quickly that I made 80% of my money from about 20% of the work, so I thought, I’ll slowly get rid of the other 80% and just concentrate on the work that will provide the best returns.”

Personal injury law is often dismissed as “ambulance chasing”, and Neil acknowledges that there are some in the profession who don’t do much to discourage that perception. “In our early days the market was more about volume. And to secure that volume, it was more of a sort of frontline approach, so that there would be a lot of advertising around ‘Have you had an accident?’ And the thing about that is that, long term, that sort of reputation sticks – and for us, it’s taken a lot of years to be able to put across the message that that’s not what we’re about. That said, I don’t want to belittle people who have low-value claims, because even a short-term injury can be quite horrific and debilitating. But, certainly over the past five years, we’ve moved into a space of work that’s very much high value and life-changing.”

Hudgells has since built up a formidable national reputation, and some of that “life-changing” work includes representing families in some of the most high-profile cases of recent years, such as the Grenfell Tower disaster, the Manchester Arena bombing inquiry, and more recently the Post Office Horizon scandal (they’ve helped get 49 convictions quashed so far, with more cases yet to be heard). “This is where we do our best work,” says Neil. “We’re helping people rebuild their lives as far as they can. People committed suicide, family relationships were damaged, and people lost their marbles as well as their livelihoods, reputation and in some cases their liberty.”

Neil is passionate about access to justice, something that successive government cuts have put increasingly under threat, but the motto of Hudgell Solicitors – which now has offices in Hull, Manchester and London – is, “we are committed to fighting for the people who need us the most, not those who can pay the most”. Neil adds: “We’ve been going the best part of 25 years, and we’re in the fairly luxurious position that the business is cash-generative and positive, so we can afford to do a lot of work for nothing – and we do do a lot of work for nothing. ‘No win, no fee’ has always been our core work, but within that we do heaps of pro bono, and a lot of the Post Office work has been pro bono. While the business has to be viable, there is a balance, and we like to do interesting, novel things that, essentially, make a difference.”

Neil, who has supported Hull KR since he was six, realised a boyhood dream when he became chairman of the club he loved in 2004, and later major shareholder. But for him, it proved to be a case of “be careful what you wish for” and highlights the perils of turning a passion into a business pursuit. Last year, he announced he was stepping down as chairman, saying at the time that it had been an “all-consuming journey” and that “now was the right time for change”. But with new CEO Paul Lakin in place, he tells me he’s more “relaxed” about the situation and he’s now in no real rush to sell the club.

“We’re looking at acquiring the stadium; the club’s going in the right direction. It’s been in my blood since I was a kid, since my grandparents took me. But it’s also been a real millstone around my neck because reputationally, it can’t go down on my watch. After so many years it’s been very difficult, very financially draining. And if I had advice to anybody about buying a sports club, I’d say, firstly, don’t buy one. Secondly, if you are going to buy one, buy one 300 miles away, so you don’t have to worry about the local derby! Ultimately it is a crushing personal responsibility because of how important sport is to people in this city – it’s mainly a very working-class base who get their relief from the hard graft of the week by watching the rugby.”

Neil says that people are often surprised to discover he’s a bit of a “social introvert” who eschews “business networking, and all that sort of stuff”. (It doesn’t particularly surprise me, but perhaps it takes one to know one.) He adds: “You almost put a costume on to do the job – as my job is to champion people’s causes and represent them objectively, but with passion and energy. When it comes to myself, though, I like to sort of fade into the background.”

He maintains a “healthy cynicism” around networking events where motivational speakers stand up and talk about how great their business is and impart their top tips for success. He agrees with me that these talking shops are almost an industry in themselves – and if you’ve got time to go swapping business cards with all and sundry, then you’re probably not getting any work done.

And the work of Hudgells speaks for itself. It has been recognised as a Top Tier Firm in the leading 2021 Legal 500 guide and in The Times Top 200 Law Firms 2021, and Neil has just been nominated for the Law Society Gazette Legal Personality of the Year award.

There are the high-profile wins, but they’re also making a difference at a community level too; in July Hudgells launched its corporate social responsibility strategy, cementing its commitment to local suppliers and good causes, as well as training and recruiting its own staff.

I’ll give the last word to Paul Sewell, another hugely inspiring – and similarly modest – business leader, who was among those who nominated Neil for our Top 20 contest. “Neil founded and grew a national law firm based in Hull which has broken new ground with its leading role in attaining justice for the wronged postmasters. He also saved and then took his beloved Hull Kingston Rovers into the top flight of rugby league, as well as long-term sustainability and security at the top.

“His business skills achieved these – but his big heart makes sure his city and community benefits.”