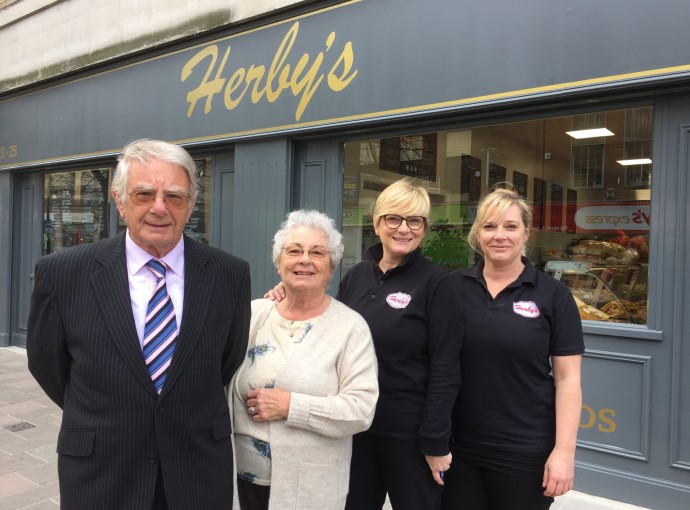 Tony Burr, founder of Herby’s, says the relocation of the deli and bakery from Princes Quay to a double unit only yards away in Carr Lane will improve the offer and support other businesses in that part of the city.
He said: “The layout here means we now have a kitchen and can keep restocking with freshly baked products. One of the reasons for moving here was to complement the other businesses in the area and help them enhance this part of the city centre.”
Tony, now 84, ended a 22-year career working at Queen Elizabeth Dock in Hull to open the very first Herby’s in a former hardware shop in Newland Avenue, Hull, in 1984. The name came from his father and grandfather, and from Tony’s middle name. The idea came from his passion for good food.
He said: “I enjoyed food but at that time I couldn’t always find the things I wanted. There was only one thing to do about that – specialise in excellent food and different tastes.
“I remember when we rang the Hull Daily Mail to book an advert. They asked which section we wanted to be in and we told them delicatessens. They said they didn’t have any of those, so they created a new category for us!”
His first flavours were Italian, introducing plenty of basil and oregano under the guidance of the owner of the renowned Pier Luigi restaurant in nearby Princes Avenue. Other delights included 60 different cheeses and 30 different salamis and the business which was initially launched with the help of £40 per week from the government’s Enterprise Allowance Scheme prospered and expanded.
In 1989 it relocated to Ferensway and added a 100-seat café. The shop in Princes Quay was added in 1993 and at various times there were others in Holderness Road, Hessle Road and Market Place, in the building that is now a post office.
As Tony and his wife Sheila reduced their involvement, other outlets closed and they concentrated on Princes Quay with two of their daughters, Alison Denby and Michelle Hodgson, who are now directors of the business.
The range and quality of products has increased, along with demand for catering for social and family occasions and corporate events, although Tony and Sheila drew the line at catering for their own Diamond Wedding celebration at the weekend.
Tony said: “We’ve had good locations wherever we have been and this is another one. A lot of people walk up and down Carr Lane and go past here on the buses.”
The corporate colours have changed to gold and grey but as a time-served painter and decorator, Tony will soon get to work adding the old red and green branding to the inside of the shop.
Kathryn Shillito, HullBID executive director, said: “Herby’s has been a great success story since opening 35 years ago and we’re delighted to see them showing a desire to work with other independent businesses and continuing to trade in Hull city centre.”
Phil Ascough, who reported on the opening of the first Herby’s shop for the Yorkshire Post in 1984, said: “I remember very clearly walking down Newland Avenue all those years ago and being so impressed that Hull was about to get its first independent deli. The fact that Tony had been on the docks for 22 years made it an even better story and I’m delighted to see they’re still going strong.”