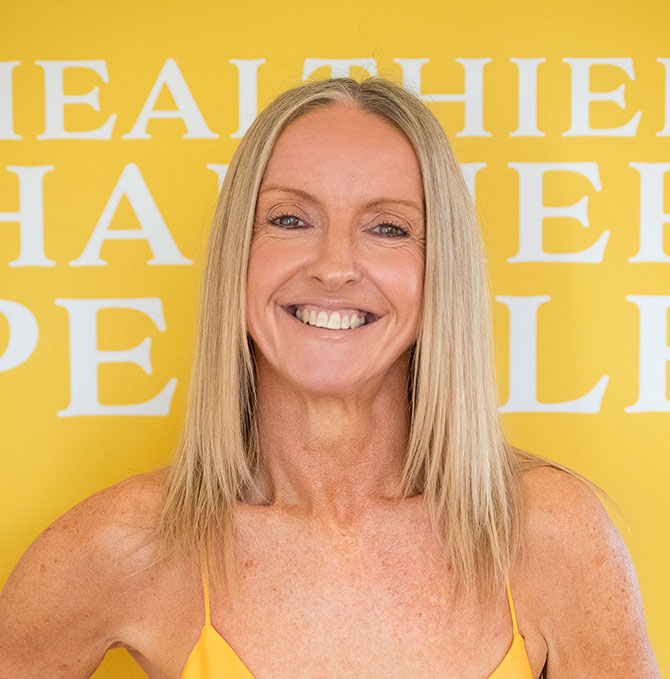 “I think I need your services…” was my first comment as I began a Zoom chat with Heidi.

I would say she’d have her work cut out, given the appalling state of my cluttered office, compared with her minimalist surroundings, which exuded a zen-like calm – but then, as I was about to discover, she’s made of strong stuff, so she could more than likely knock my chaotic work-life balance into shape.

You might think that to be a life coach, you’d need to live a bit of a life first… and in Heidi’s case, you’d be right. After showing a natural aptitude for maths at school, she embarked on what would be a 27-year career in finance. At the age of just 19, she became a supervisor in a bank, and by 22 she’d been promoted and was in charge of 10 people.

But then she became pregnant, and lost her supervisor grade by going part-time – she ended up right back where she’d started, as a cashier. “Then I started to say, do you know what? I want to do something else,” says Heidi. “Money was tight, I was only young, and I’d just got my first house with my partner. I spotted an ad for fitness instructor training. The course cost £500, which back then – I’m 51 now, so that’s nearly 30 years ago – was a lot of money. My mum gave me the money to do the course, and I actually qualified – I never thought I would. I got 95% in my theory. I thought I’d got somebody else’s paper!”

She took a job at Albert Avenue baths, teaching six fitness classes a week alongside her job at the bank, and by now had two young boys. Then she split from her partner and, two months later, she met her future husband. She initially thought he was “wonderful”… but the marriage turned out to be a “huge mistake”. The signs had been there when she discovered she was pregnant with her third child just five days before their wedding – but she went ahead with it and then found herself trapped in a domestic abuse relationship, the details of which are too traumatic to publish here, and which bring her almost to tears as she relates the story.

“So then I find myself going through a domestic abuse divorce, I’ve got two jobs, and three children… and I’m thinking – what is wrong with me?” says Heidi. She had to buy her children’s clothing from charity shops, but this inspired her to set up a business on eBay to help keep the wolves from the door. Now she had three jobs. It took a toll on her physical health, too, as she became ill, first with tonsillitis, then with laryngitis, and it developed into pneumonia. Her voice cracks again as she says, “I had to dial 999 in the middle of the night – I thought my children were going to find me dead. And this is really where my story begins, as I realised I’d put everybody before me – so I went for counselling.”

This was to unearth a childhood trauma that Heidi had not come to terms with, and the sessions also helped her change her diet and set her on the road to recovery. However, there came another blow when one of her best friends’ sons – who had been like a nephew to her – was killed. In the trauma, she had disregarded an important email from eBay and she ended up losing her online business. It was a turning point that made her determined to do something with her life to “make a difference”.

To make ends meet, she went back into finance, working at Investment Hub NEL, a funding hub for businesses in North East Lincolnshire, and began going to networking events for the first time in her life. One of them featured a presentation by leading life coach John Borland. “I thought – that’s what I want to do!” says Heidi. The only stumbling block was the cost of his course – £3,000. “I didn’t have that sort of money, but he said I could pay monthly. I was paying £250 a month for my daughter’s dance class – so I decided to invest in myself, too, for once.”

Heidi was one of just two people on the course to qualify, and she soon found work as a counsellor – but for someone else. And she didn’t feel as though she was being used to the best of her abilities. “I thought, this is holding me back, because I have to work to their model. My boss was a counsellor, but I was a life coach and a fitness instructor and all these other things, and I felt like I didn’t quite fit into counselling. What I was doing was different.”

What eventually gave Heidi the strength to strike out on her own was one particular client who was a company director. A year after she’d first seen him, he returned and told her that her session had been so effective that it had set him up for a whole 12 months. “I was amazed!” says Heidi. “Then I said – I think you need me in your business. He said – when can you come in? So I started coaching in that business. I told my clients I was leaving, and even though I wasn’t supposed to take clients with me, they said, ‘We want to come with you – we’ll just say we’re called Mickey Mouse or something!’”

And then Covid hit – and Heidi found herself coaching people from home. But she used social media and live-streaming to their full advantage, writing health and well-being courses for businesses as well as producing daily motivational videos. “At the beginning of lockdown, I knew people would struggle. I’d never used social media before, but I started doing videos, just giving a tip of the day. Then I realised this was going to last more than two weeks! So I carried on, and I think I did 68 days, non-stop. People started messaging me, saying I’d kept them going through lockdown. I spoke to some who were in very dark places, gave free sessions, and it just grew from there.”

Heidi now runs health and well-being courses for businesses, one-to-one sessions for individuals, couples and family sessions – her youngest client is just eight years old – as well as fitness classes. Her USP is, simply, “Healthier, happier people.” She uses a holistic approach to therapy combining counselling/life coaching and all her other qualifications ­– in fitness, relationship therapy, cognitive behaviour therapy (CBT), neuro-linguistic programming (NLP) and child and adolescent counselling – to help get the best outcomes.

She is passionate about removing the stigma around seeking help with mental health, and stresses that, of course, a life coach needs life coaching too. She wears her heart on her sleeve unashamedly, and isn’t afraid to hold back her emotions – this way, she encourages others to do the same. “On my health and well-being courses, I show my vulnerability. But on my business coaching courses, people see a different side to me again.”

One in four people suffers from mental health problems, and, as Heidi points out, sickness days lost to mental illness cost the economy £46 billion a year – which works out at £1,700 per employee. Set that against six sessions with Heidi for £500 and that looks like a good investment for any business.

Self-care is another big thing for Heidi. While she’s an incredibly busy woman – in her spare time she’s a highly skilled Latin and ballroom dancer, performing in the National League and teaching veterans how to dance – she makes sure she gets up at 6am every morning, stops using tech devices and TV two hours before bedtime (10pm), and has a daily 15-25-minute power nap. “I prioritise sleep, nutrition and do core exercises – I want to get across the fact that self-care is not selfish,” she says.

Back to my messy office. Heidi has a great tip for tackling that, which would also apply to life in general. “Take little steps. Just start by sorting one drawer. Don’t run a marathon… just put your trainers on.”