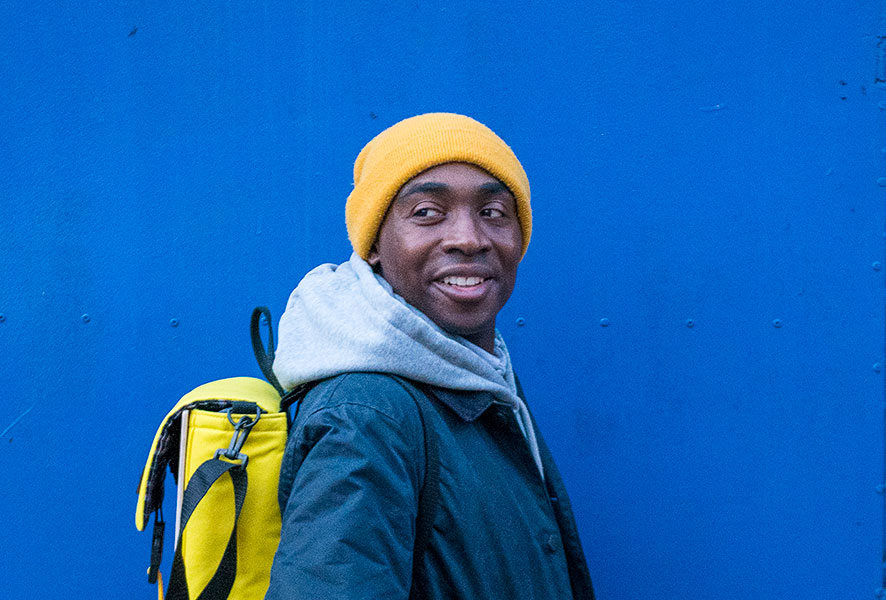 There’s an undeniable certain something about Paul Jones, bagman extraordinaire, by Jon Griffin.

The Black Country lad – he admits he is ‘a youthful 38’ – is the brains behind Goodstart Jones, bags and luggage designer catering for all tastes from UK style-lovers to customers in Europe – and even Japan – from a homespun converted former manufacturing depot in the backstreets of Wolverhampton.

Check out the Goodstart Jones website and the language and photographs exude style and fashion. Or, as the site says, ‘designed and handmade in England, inspired by creatives for creative lifestyle.’

But it’s been far from an easy ride to online recognition for the Walsall-born son of Jamaican immigrants who had harboured a burning desire during his schooldays to carve a successful career in car design.

“I was obsessed with going to university and getting a degree in Transport Design. I had a really big passion for cars, I saw them as a work of art.

“But to do transport in the way I wanted, you have to have a Master’s Degree. I did four years at university but I had to do three more years to do a Master’s just to get a job. I did not think I could do any more – the cost of the tuition fees was more than when I first went.

“I was looking at my friends, and they have got jobs, they have got money. It looked like I was going to have to move back home and maybe get a job in Tesco.”

But fate was to play a significant part in the business career of this very likeable entrepreneur, who laughs easily as he recounts his life and times forging a distinctive niche in the world of luxury design.

“Growing up, I liked carrying bags – I would carry my small stuff in there – I felt naked without a bag.” It was an early sign of a penchant for style that would consistently underpin Paul’s working ambitions.

Rather than stack supermarket shelves Paul, who had previously undergone a design placement with a company near Barnsley, was able to again put his creative outlook to good use working on footwear design for an East Midlands company.

“I landed a little job doing footwear just outside Nottingham. It was paying £14,000 a year, and I was living in not the greatest place – it was OK.

“But then the 2008 credit crunch came along and in 2009, they started downsizing. I worked on the design of what I would call low end shoes.

“I worked there for four to five years – I got up to £24,000 a year but you do not really see it. When I was there I thought I was always going to get fired. I made quite a few mistakes – you have to have a set budget you are working on and I was always going a little bit over budget.”

The key to the man behind the stylish vision which ultimately led to the launch of Goodstart Jones is encapsulated in his experiences struggling to make ends meet working on so-called ‘low-end shoes.’

“I do not like to think like that, I like to work more creatively. It gets very frustrating most of the time. I got moved back to accessories on lower pay with a subsidiary company.

“I was working on bags, creating the cheaper end of bags. That kind of kills your creativity. I eventually came up with my own ideas and that is how I got into bags. I would go home to my little bedsit but I was learning on the job all the time.”

Paul decided to move back to his childhood base in Walsall where his forklift truck driver father and nurse mother had carved a living in the Black Country after leaving their native Jamaica. It was a decision that restored him to his roots – and was to lead to the launch of Goodstart Jones a few years later.

“There are five of us, twin brothers and three older sisters. I left the company in 2013 and saved up while I lived with my brother.

“I had the idea for a Woodsack bag. I was making bags at home and things got a little bit busy. I did not know what to call it and my mum came up with the name. It sounded weird but it was also real – I didn’t have a brand name.”

A whole new audience beckoned when Paul was approached to set up a pop-up shop in Birmingham’s Oasis market for three months. He stayed for two years, and the Woodsack design plus his other bags began to attract attention from a wider range of potential customers.

“You get your ups and downs. Some days, you do not make anything at all. Some days, it was crazy. Mondays blew me away – I thought how is Monday such a busy day?

“The pop-up was OK, but slow at times. I staged music and fashion events in the shop to draw attention. I had the website and I had the bags, but I was not selling enough.”

In another curious twist of fate in the Goodstart Jones saga, Paul developed a hernia which kept him housebound. So he decided to quit the pop-up shop and move to new premises in Wolverhampton whilst returning to his first love of designing.

“I shut it down just before Christmas 2016. I moved in here in December 2016. I am happy that I left the shop, I would not have been in this position if I had not taken that decision.

“To keep the rent paid, we took on more jobs, manufacturing and designing for other people.”

And the expansion of the firm’s activities paid substantial dividends as interest in Paul’s goods began to grow, including from overseas.

“We exported 400 bags to a Japanese distributor. The wholesale price was £48 so the order was worth thousands. We were also approached by a company in France  – it comes through emails and phone calls.”

Paul’s increasing presence in the retail world was underlined when he was invited by eBay to take part in the Wolverhampton Retail Revival in 2018, providing a key new online outlet for Goodstart Jones.

“We still do eBay – we made almost £1,000 selling shoulder straps. The best selling bag on eBay was £30. We can compete on quality and value for money, and the feedback has been great.”

Paul has also added to his team, with designer Anson Carridice-Davids and illustrator and social media guru Paris Walker-Barnes bringing their own individual expertise to the Goodstart Jones operation.

“When we first came here, it was a struggle. Here in this unit, there was nothing, no floors or proper walls. I got complacent – one day I said ‘let me just paint that wall’….Anson said: ‘A few people are waiting for their bags.’ I said: “Well, OK, I will go back to the sewing machine.”

Paul admits he is consumed by the job, and has sometimes slept on the sofa upstairs from the ground floor where bags are hand-made. And that virtual 24-7 approach means he is increasingly in demand for his goods.

“I wake up at home, and there are e-mails waiting for me. I was here one day and a guy called from America – he just wanted to talk about how you get started.”

Paul is justifiably proud of his Goodstart Jones venture, but you sense that his entrepreneurial flair and eye for detail will always survive the inevitable peaks and troughs of life in the unforgiving world of online retail, where the world is your marketplace – but conversely the marketplace is the world.

And that marketplace has never been more tested than in recent times during the Covid-19 pandemic – but Paul was able to turn the biggest global emergency in decades to his own advantage.

“I was thinking ‘how am I going to pay the mortgage?’ I decided to remain open and stay positive and do what we can. It was weird, the sales had dried up and then Corona hit.

“Our advantage was stores starting to shut down while we were still able to trade. We did some changes to the website, tweaks and things, more people went onto the website and it has pushed our traffic up and more traffic means more conversions.

“The only struggle was posting out deliveries, we got a lot of emails saying ‘where is our order?’ But orders really did jump. Because of the feedback from eBay we got a lot of interest and people would go straight to our website. I am really grateful to eBay because it has worked really well.”

Warming to his theme, his eyes twinkle as he explains: “No-one else is making bags like us. They are unique. We have now sold almost 1,500 Woodsacks – you make 100 per batch, and then you make another batch.

“We are now 60 per cent export. We include delivery for free. At the start we underpriced them but within days, we started getting more sales.”

But sales – however crucial to the long-term prospects of Goodstart Jones – are far from the be-all and end-all for this engaging Black Country entrepreneur.

“If I make a mistake on a bag, I will unpick it and do it again. I would rather send things back that I am not happy with. I just want to do good, to do better.”

“Everyone is running off to China but I couldn’t do that. Working in the West Midlands is so affordable.” And you could argue that the West Midlands cannot afford to lose entrepreneurs as enthused over their livelihoods as Paul Jones clearly is, and as determined to fight back against a global pandemic like Covid-19.