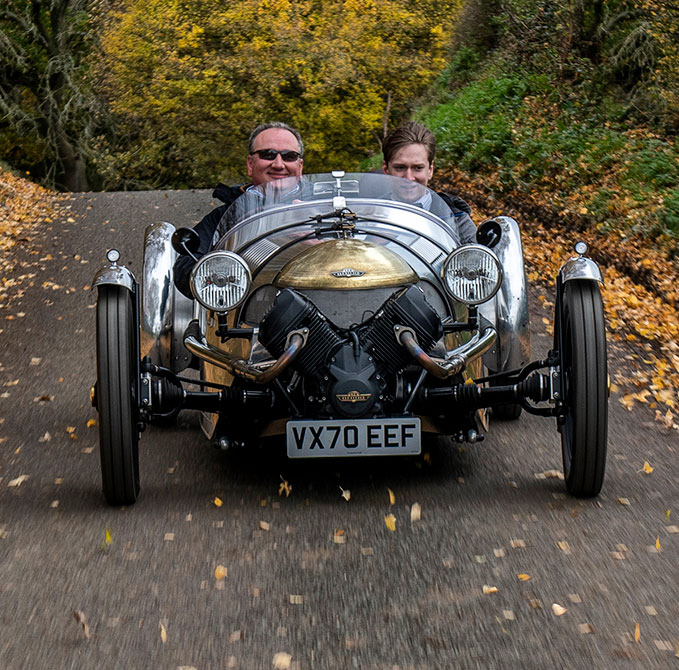 Gary Watkins, Managing Director of Q6IT Services, takes his son for a spin in the new Pembleton T24.

When I was first asked to review this car, frankly I had never heard of Pembleton Motor Company, let alone a car company based less than 10 Miles from my home. A quick search of the internet and the Pembleton website and I was intrigued, and thus agreed to the review.

The opportunity to drive, what looked at first glance a lot of fun, along with the opportunity to take my 17 year old son who is somewhat of a petrol head, was a little too tempting. On arrival at the address I was given, I was unsure if I had the correct location. Into that small village of Bayton and down a narrow lane past the church, no signs, I start thinking; “I’m lost”. Then I see the T24, waiting ready and on display under a portable gazebo, outside of what looked a little like a stable, but our focus and discussion soon turned to this fabulous looking machine.

With its vintage looking lines, traditional 20’s styling, gleaming aluminium handcrafted body and V-Twin engine at front, we could not wait to get going in this beauty. We were treated to a fascinating guided tour of the factory, the obligatory photoshoot, as well as meeting the team, but we were itching to get on the open road. We were introduced to the T24 by Guy Gregory, designer and son of ex-National Hill Climb Champion, Phil Gregory.

This cracking little car is based on the classic Morgan three-wheeler, but reimagined for 2020, with modern creature comforts like USB charging ports, heated seats and strict safety measures. This small sports car is built using the same techniques as original cycle cars; every piece to this gem of a body and chassis, is hand-made in shop. From the aluminium bodywork and leather seats, down to the gauges and the needles placed on them. Everything is exquisitely finished.

The team behind this creation, a small crew of 6 people including Phil and Guy, have spent many hours perfecting their design for this car, to bring some more flair to their already existing 3 wheeled V-sport. Having an extra wheel does not change the characteristics of the car, as it is still a light and nimble sports car, that can put a smile on the face of its driver, passenger and those it passes on the road. A subtle nod at the admiring onlookers is all it takes to acknowledge the little bit of joy this car has given to them in that moment. The T24 is powered by a small 750cc V twin engine, mounted at the front, to stay true to the original design.

Fitted with electronical management and fuel injection, the engine runs as smooth as ever, creating a bountiful noise of pops and bangs, that both my son, Myles, and myself found childishly pleasing, smiling every time we heard them through the twin exhaust, as they glide down the side of the car. Heat shields are wrapped along both passenger and driver areas of the exhaust to ensure that you do not inadvertently place a hand on the hot exhaust, as there are no doors or windows. I am not the smallest of chaps, so getting into the car was “amusing”, but once in, it is very comfortable.

The engine powering the T24 may be small, but it has enough torque to get it from 0-60 in just under 8 seconds. The fuel economy on it is also very good, up to 60mpg. The V-twin of this car produces a purr at lower rpm and then grows into a classical symphony of the throaty pulsating roar reminiscent of a Harley-Davidson motorbike, without being rowdy or offensive The suspension and brakes fitted to the T24 are updated to meet the standards of modern motoring, with 270mm disk brakes fitted to the front wheels, and fully independent suspension at all four corners. The suspension is firm enough to stop the body rolling in the corner; yet is soft enough to not break your back when going over a pothole or speedbump. The brakes themselves have been brought from the wheels, to the inside of the body, just behind the engine to bring all the weight inboard, rather than putting extra weight on the wheels to make them feel more direct.

These small changes, combined with the classic radial tires and songful V-Twin, create a car that is true to its history, yet has the performance to match that of modern times. The experience I had driving the T24 was something I will remember for many years to come. The way it carves round winding country roads portrays the amount of time and care that has been put into the chassis and engine. You can really sense the passion of the team who build this car; or what my son now calls “a piece of art”.

The engine has a preference of where it likes to be; third is where the car truly shines. It is the gear where most of the fun happens. By the same token, the T24 is just as happy wafting about the British countryside in fourth, with the boisterous engine which is toned down. The acceleration is not as progressive as third, but this does not make it, by any means, less fun to drive. Even while doing 70mph, the car felt calm and poised. The wind deflector placed just before the cabin, is enough to divert the wind away from the driver and passenger, so that a conversation can be had. Although the same cannot be said for rain, as we found out.

Although this did not stop us from laughing at the situation. The one thing that this car does best, is create smiles, not only for the driver and passenger, but also those it passes by. Everyone gave a smile as we cruised past, occasionally saying hello. All in all, a very cheerful and memorable experience, just ask my son, he said it was the ‘best day of his life’. I‘d like to think this was due to spending some time with his dad, however I think the T24 has caught his favour; a testament in many ways to the T24’s appeal to both young and old alike.

Overall, The Pembleton T24 is a fantastic car. A small, lightweight, hand-built sportscar for days out and forgetting the challenges of the week. For longer excursions there is a nifty storage area behind the seats, large enough for two reasonably sized overnight bags, so you can take it away for the weekend with the other half, just to go for a drive or picnic, it will simply whisk you away on a fun journey.

The only way you can truly understand the passion put into this car is to visit the workshop where they are built and meet the men behind this lovely machine. A true sportscar for the ages.

I would like to thank all the team at Pembleton for their hospitality and for the opportunity to drive this little gem. I look forward to taking it away for the weekend with my good lady.