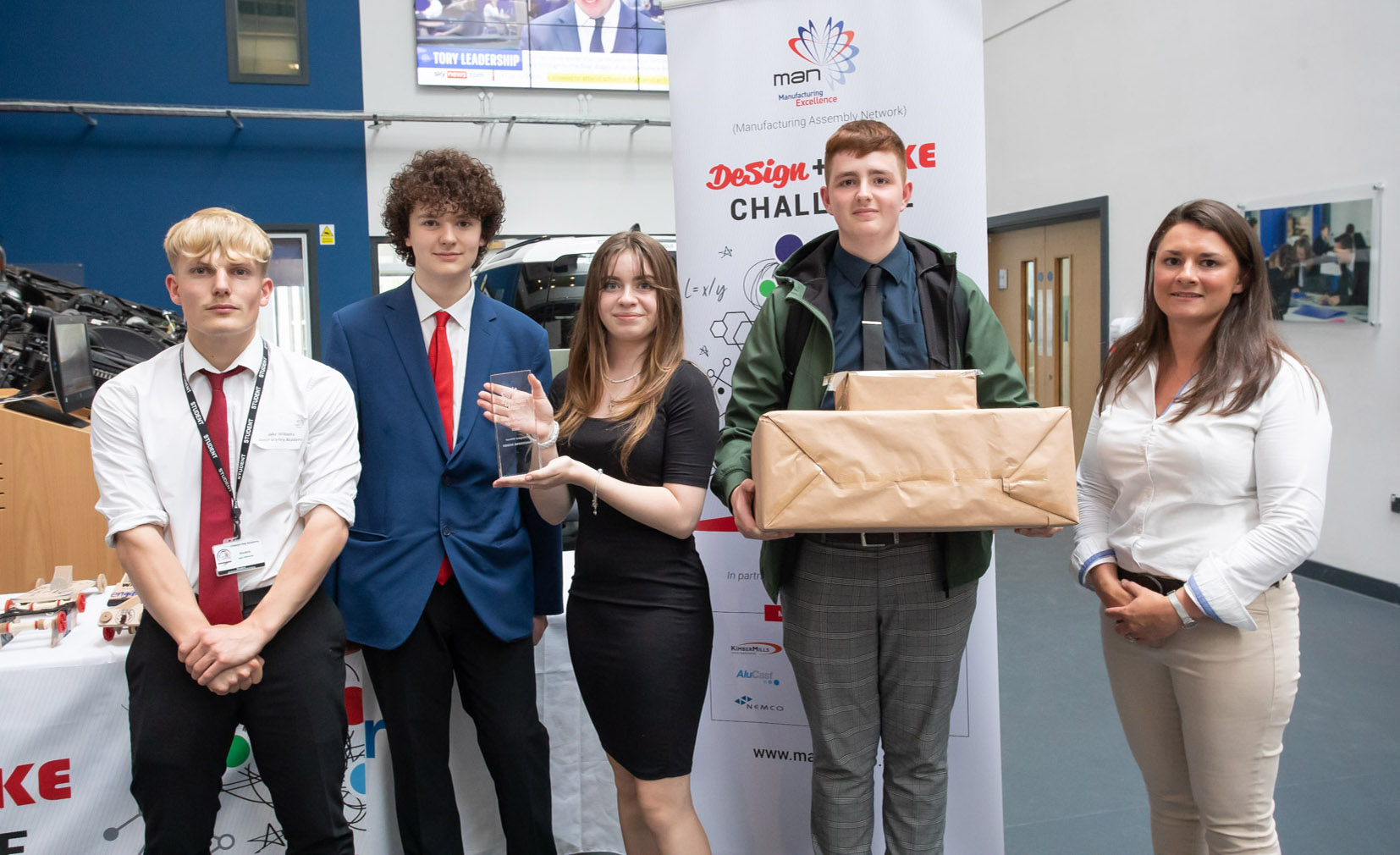 An enterprising Staffordshire school has been crowned as a major winner at one of the biggest independent manufacturing and education events in the UK.

Great Wyrley beat off competition from seven other rivals to take the Innovation title at the Manufacturing Assembly Network’s Design & Make Challenge 2022 after its purpose-built vehicle wowed judges with its creative shape and the team’s decision to build its own test track.

A team of four – Adam Gould, Harris Goodall, Jake Williams and Louise Birch – were set the challenge of using basic materials and tools to make a vehicle that could be propelled by a falling weight. They tested their device, modified it and then raced it on a 7.5m long track to see which one would complete the distance in the fastest possible time.

Great Wyrley Academy were joined on the winners’ podium by Ernesford Grange Community Academy (Manufacturing Prize), WMG Academy for Young Engineers Coventry (Efficiency) and Alcester Grammar School, the latter claiming the first-ever Communications prize for its use of social media in promoting the day.

“Now, more than ever, we need young people to choose engineering and manufacturing as a career and we’re not going to change perceptions by sitting on our hands, doing nothing,” said Austin Owens, founder of Grove Design (Pembridge) and co-chairman of the Manufacturing Assembly Network (MAN).

“This was a comeback for the Design & Make Challenge after a Covid-19 enforced break and we were delighted to see the appetite to take part was still there. I have to say the task was the hardest yet and the young people really embraced it.

“The atmosphere in the room was amazing and I’m convinced we’ve seen some of the engineers of the future here, engineers that will go on and improve the way we live for the better.”

Louise Birch, pupil at Great Wyrley Academy, said: “It was such a good day, where we put into practice a lot of the skills and critical thinking we had learned in the classroom.

“Working as a team was also really rewarding and to win one of the main prizes was surreal, especially bringing a 3D printer back to school for other students to learn on. As young people considering a career in engineering, we need more events like this on the curriculum.”

Organised by MAN, the Design & Make Challenge saw more than 35 students swapping their daily lessons for the chance to test out their design, engineering, prototyping and communication skills at the all-day event held at WMG Academy for Young Engineers in Solihull.

Nick Allen, managing director of 3DPRINTUK, said: “We are both proud and delighted to sponsor the Design & Make Challenge 2022.

“The competition is a great fit for us. By donating 3D printers to the winners, it allows the next generation of engineers and manufacturers to learn in a hands-on way about the advantages – and disadvantages – of 3D printing for any given application. It’s something we are passionate about both now and for the future.”

The eight subcontract manufacturers and specialist engineering design agency form a global collective that works together to share best practice and secure contracts for UK industry.

It is the third year that the group has held the Design & Make Challenge and earlier competitions have resulted in 352 hours of hands-on manufacturing experience for young people, seven MAN company visits completed by schools and more than £25,000 of press coverage to raise the profile of the sector.