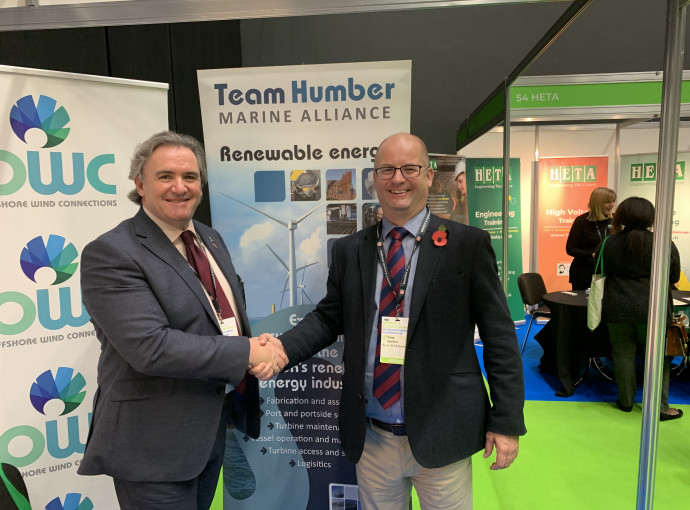 In offshore wind and the broader energy market, Burns & McDonnell carries out comprehensive project development services including site evaluations, energy assessments, regulatory support, technology evaluations and grid planning, design, procurement and construction.
Team Humber Marine Alliance, a leading UK renewable energy business development group, launched its anchor partner scheme in October to foster greater collaboration with companies seeking growth in the offshore wind sector.
Mark O’Reilly, CEO of Team Humber Marine Alliance, said the scheme was an ideal platform for organisations seeking closer alignment. “Our anchor partners will play a vital role in helping us to ensure the Humber cements its position as a world leader in offshore wind and wider renewables, and in turn, our involvement will help them with their growth plans,” he said.
Tony Appleton, who leads Burns & McDonnell’s rapidly expanding offshore wind initiatives, said: “Burns & McDonnell has delivered critical energy projects for more than 100 years and we are continuing to expand our team to support offshore wind projects globally that will help provide efficient, sustainable energy for years to come.
“To strengthen the industry, we are working closely with crucial UK industry stakeholders and organisations like Team Humber Marine Alliance which has been a hugely important player in the success of the sector to date and linked UK expertise to opportunities in the United States.”
Burns & McDonnell opened offices in Birmingham in 2017 as its base for business in the broader UK power industry pledging that one third of its senior leadership would be female by 2023. It is ranked by Engineering News-Record as No 1 in Power and Electrical Transmission & Distribution and is on Fortune’s 2019 list of 100 Best Companies to Work For.
Mr O’Reilly added: “Burns & McDonnell is strongly committed to the UK market and we look forward to partnering with them in growing the offshore wind sector in the UK and around the world.”
Earlier this year, 121-year-old Burns & McDonnell announced a record $4 billion in sales and its commitment to hiring 1,000 new employees globally each year for the foreseeable future.
With nearly 25 years under its belt, the last decade has seen Team Humber championing offshore wind, with a significant role in attracting investment, developing skills and helping the supply chain to mature and win new business.