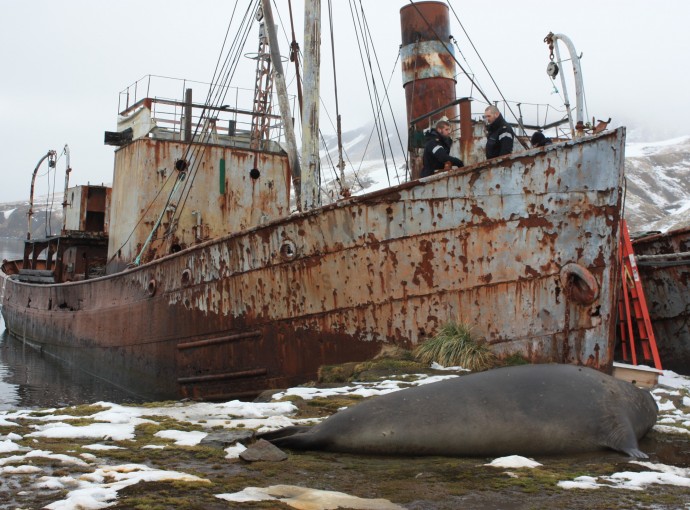 Guests at the exclusive event heard from former MP Alan Johnson, patron of the Viola Trust, and from key figures at Hull City Council that a space has been reserved for the Viola trawler in the proposed Yorkshire’s Maritime City project.
They were urged to support the campaign by making donations and by spreading the word about the benefits of the project, which include adding to the development of Hull as a world-class tourism destination and providing training opportunities for a new generation of marine engineers.
Many took advantage of an immediate fund-raising opportunity by purchasing bottles of commemorative Viola gin, hand-crafted by Hotham’s Distillery in Hull and launched at the event, which was held at 1884 Wine & Tapas Bar in Hull and featured a gin-themed menu.
Mr Johnson, who as MP for Hull West and Hessle campaigned tirelessly to secure recognition and recompense for the Hull fishing families who lost thousands of men at sea, told of the Viola’s place in the city’s maritime history.
She was built in 1906 at Beverley Shipyard and became part of a fleet of 50 owned and operated by Hellyer Brothers. After being requisitioned to defend the coast of the UK during the First World War, she sailed from Humber Dock – now Hull Marina – in 1918 and has never returned.
The Viola went back to trawling under Norwegian owners and was then converted to catch whales. A further sale to an Argentine company saw her move to the South Atlantic to catch elephant seals. She also supported expeditions to the area but when the whaling station at Grytviken closed in the mid-1960s she was mothballed. She still sits on the beach where, in 1982, she was targeted by Argentine scrap metal merchants in one of the incidents which triggered the Falklands War.
Mr Johnson said: “The Viola was the only ship to have been involved in the First World War and the Falklands War. She would be a visitor attraction for whoever could get hold of her and we want her to come to Hull.”
He added that the Viola Trust has secured clearance from the authorities in South Georgia to bring the ship back to Hull, ABP have agreed to provide a site where she can be restored and training bodies are standing by to provide young learners.
He said: “It’s good for engineering, it’s good for tourism, good for the economy and part of our maritime heritage. I have got a TV company who are desperate to make a film about the Viola but they won’t commission it until the funds are in place to bring her home.
“We all believe it would be a crying tragedy if we just allowed the ship to erode on that beach with people saying they wish we could have done something. Why didn’t we do something? We need your help and generosity to make a contribution towards this. She is guaranteed an after-life back here.”
Simon Green, director of cultural services for Hull Culture & Leisure Ltd, said Project Hull: Yorkshire’s Maritime City emerged from the recognition that Hull needs to do more to celebrate and benefit from its links with the sea.
He said: “Part of the City Plan is about establishing Hull as a world-class destination. It builds on the investments that have been made in the city already. We need more people to come to Hull and be enamoured by Hull and its unique culture.
“We will refurbish our beautiful museum and will give people a flavour of what Queens Dock was like before it was a park. It will become a journey for people to walk through to get a flavour of that experience of a dock in the heart of Hull. The Arctic Corsair tells a tale and the Viola tells an extended link. Once she is here, there are a lot of opportunities for us to expand the scheme.”
Mr Green said projections indicated that the scheme could create about 50 new jobs and at least 46 apprenticeships and traineeships, providing opportunities for about 20,000 learners and attracting 300,000 visitors in year one alone.
He added: “The cost is about £27.4 million, about the same as UK City of Culture and a huge chunk of money. We need to get the message out, together with the Viola Trust, that this is a big opportunity for the city. We can celebrate our connection to the sea and continue what we started in 2017. This is our perfect time to look forward to the future and make Hull a better place for everybody.”
History
The Viola, built in Beverley in 1906, operated from Humber Dock – now Hull Marina – as part of the Hellyer fleet of boxing trawlers. She was requisitioned to defend the UK in the Great War and left Hull for the last time in 1918 on a career which took her to Norway, Africa and Argentina, catching fish, hunting whales and elephant seals and supporting expeditions in the South Atlantic.
Her stories are of Hull men sailing to the most distant areas of the North Sea and working in perilous conditions for weeks on end, transferring their catches by rowing boat to fast steam cutters which fed the nation’s growing appetite for fish and chips.
When the First World War broke out, Viola and her Hull crew were on the front line of the maritime conflict, steaming thousands of miles on patrol across seas infested with mines and U-boats. Viola had numerous encounters with the enemy, being involved in the sinking of two submarines. More than 3,000 fishing vessels and their crews saw active service during the Great War and today Viola is almost the only survivor.
In the 1970s, Viola was mothballed after the closure of the whaling station at Grytviken, South Georgia. Sitting on the beach, where she remains, the old trawler was the target in 1982 of scrap metal merchants from Argentina. But when they landed they ran up the Argentine flag, an action which led to the Falklands War.