Get on the road – in style 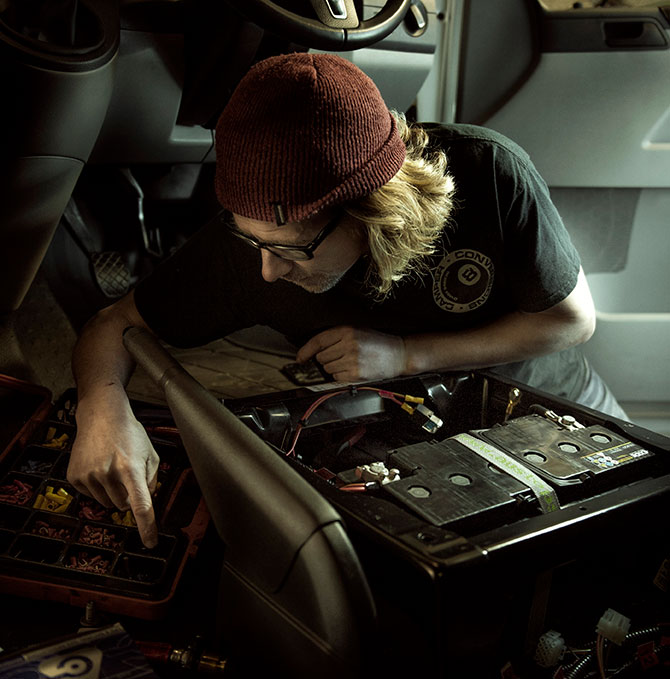 As a little boy, Colin Almond always used to love taking machines apart and putting them back together. He has no real idea where this came from – his father was a school head teacher – but from an early age Colin had already mapped out his future career.

On leaving school, Colin started as a YTS at a garage in Kingston Road, Willerby, before working as a mechanic for Mercedes in Anlaby Road and at an independent garage in Willerby. Then in 1995 the opportunity arose for him to rent Station Garage in Little Weighton. Again, having a clear idea of his own destiny, Colin wanted to buy the business there and then. It didn’t quite work out like that, and he ended up having to rent the garage for a year, but eventually he was able to take out a loan and buy the premises.

Part of the package, as it were, included an apprentice at the garage, Mike Hearst, who would later become Colin’s business partner in 8 Ball Camper Conversions. Colin and his wife Kerry successfully ran Station Garage until about 2005, but by then Colin had itchy feet. “I’m a great believer that, mentally, you struggle to permanently focus on one business,” he says, “and then you need to get your teeth stuck into something else, because you can get bored and a bit stagnant; staying fully focused on one business and constantly evolving it is quite difficult.”

It’s fair to say Colin is a bit of an action man, with a passion for surfing, snowboarding, wakeboarding and biking, and over the years he’d done his own van conversions to allow him a few home comforts while on the road. And that set him thinking. “I realised that a lot of the conversions the big companies were doing were of quite a low standard. In the conversion industry at the time, a lot of caravan firms just took all the components they were putting in their caravans and chucked them in a van. There was nothing bespoke made, and they were a bit old-fashioned and not very well thought-out.”

As time went on, Station Garage needed less of Colin’s time, so he and Mike could turn their focus to the camper conversions. “The garage industry has evolved over the years, as cars don’t go wrong as much as they used to, so I wasn’t needed as much in the garage, which was running quite successfully. I started building campers more full-time and I eventually persuaded Mike to become my business partner. He invested some money too, and then we started up 8 Ball Camper Conversions.”

In 2011, they became a limited company and had outgrown Station Garage, so Colin set about planning to build a bespoke workshop on the patch of land he owned across the road from the garage. He secured permission from East Riding Council, getting the plans through as an extension of an existing business, and the unit was finally completed just as Covid hit last year. By the time the first lockdown came around, Colin had already put safety procedures in place at both of his premises. “Even in January 2020, it was fairly obvious to me that this was going to be pretty massive,” says Colin. “And as a businessman, you’ve got to think about this kind of thing. So even before the lockdown, we put chains across the front of the garage and workshop and nobody was allowed in unless they worked in the buildings – not even delivery men.”

This approach actually boosted custom, says Colin, as people were reassured, not put off, by the added security. “No one’s going to moan if you ask them not to come inside the building; we ask them to put their keys in a drop box, we disinfect their vehicle and ring them to pay by bank transfer. Obviously with the camper business, people come to us from all over the place, so we’ve been very conscious to make sure that our Covid policy is top-notch and that we’re not exposing anybody in the village to people coming in.”

During the past four years or so they’ve gone from completing one camper conversion per month to about five now, despite the strict social distancing restrictions in the workshop. Waving my magic wand and pretending I had the money to afford one, I asked Colin how I’d go about it. “We only build VW campers, the newer-style ones. You can find a lot of information on our website, but if you call us we can help you buy a van and discuss a rough interior layout, and then you choose literally everything – all your cupboard colours, plus wall, seating and floor colours, lighting and entertainment systems – and we bespoke-build your van for you. So you come in about three months in advance and we go through all the plans and colour charts, and the materials get ordered in – and we make all the furniture from scratch here. And then your van is in our workshop for about three to four weeks.”

I know the word “staycation” sets some people’s teeth on edge, as it really should mean “staying at home” as opposed to “holidaying within the UK”, but I fear this is a battle the sticklers are going to lose the more writers like me keep talking about the “staycation boom”. But still, whatever you want to call it, businesses like 8 Ball are obviously in a good position to benefit if overseas travel remains uncertain. And travelling around in a converted camper is perfect for remaining in a Covid-safe bubble. Has Colin seen an increase in “staycationers” (sorry…) in recent months? “I’d say it’s increased by a third,” he says. “Whether it was going to or not, I will never know, because we were really successful already and we pride ourselves on our workmanship and quality. And I spoke to a few people in the summer who said our Covid policy had made them feel much safer; how we all wear masks and demonstrate the van in a totally socially distant way.”

Another thing that’s stood Colin in good stead throughout his business career has been his meticulous planning. “I don’t know where I got this from, but even when I first bought the garage, I always would – and still do now – sit and crunch the numbers and do a proper business plan. And I’d make a really conservative plan. If you plan for your worst-case scenario, then anything above and beyond that is really good. If you are more like, ‘Oh, it’ll be fine,’ I think that’s where a lot of businesses fail.”

Colin also knows his audience and is not trying to be all things to all men. I can’t afford his camper conversions, but, to put it bluntly, he’s not selling to people like me. His market is generally comfortable young families and people from early retirement onwards with the time and money to go travelling. “We aim for people in the 40-plus bracket – those with a bit of money who want to do something different. They’ve earned the money, they’re doing well in their career or about to retire on a good pension. And we’ve never offered finance for that reason – we’ve never needed to. You’ve got to do a lot of background work to find your audience, whatever you’re selling, whether it’s a cup of coffee or something worth thousands.”

True nomads will be interested in 8 Ball’s plans to develop a larger van for totally off-grid travelling. “It wouldn’t need to be plugged into the mains at all – and it could basically go anywhere,” says Colin. “We’re building a concept van that Mike and I can use to go snowboarding and mountain biking, and we’ll see how it goes. We’ve already got a few orders in for those – when we can ever fit them in!” The current VW models they convert (T5s and T6s) already give you about two days of electricity for appliances before they need plugging into the mains, or you could opt to install solar panels, which, depending on sunlight, of course, will give you power for as long as you need it.

In 2016, Colin, Mike and Neil Wrightson started up another business, iCamper Solutions, to further expand their sales within the industry. Their aim was to solve an age-old problem with camper conversions – what to do with the table, which historically had always been tricky to fit. They designed the Loc8 table system, which stows away perfectly in the van’s sliding door. “We sell it to about 80% of the camper companies in the UK – because they can’t buy it anywhere else,” says Colin. “A Hull company makes it for us, and we box it and package it.”

Colin is positive about the future of his businesses – and the economy in general. “Obviously there are a lot of people who have lost their jobs, but there are also a lot of people who are on furlough. Nobody’s been able to spend any money, and it’s all just going into their bank accounts. You can’t go to the pub, you can’t go to the restaurant, you can’t go out and buy shoes – so I think there’ll be an awful lot of people in the country who have got a lot of money they haven’t spent, and once we get to the other side of this, I think the economy will bounce back a lot quicker than people think.” (Bank of England chief economist Andy Haldane later echoed Colin’s comments, arguing that there were “enormous amounts of pent-up financial energy waiting to be released, like a coiled spring” because people were desperate to “catch up on the social lives they have lost over the past 12 months”. “He must have been listening to me!” joked Colin.)

Let’s hope that Colin and the Bank of England are right. And if you have managed to squirrel away a few grand over the past year, you could do much worse than investing it in a fabulously fitted-out camper and getting out on the road in style.