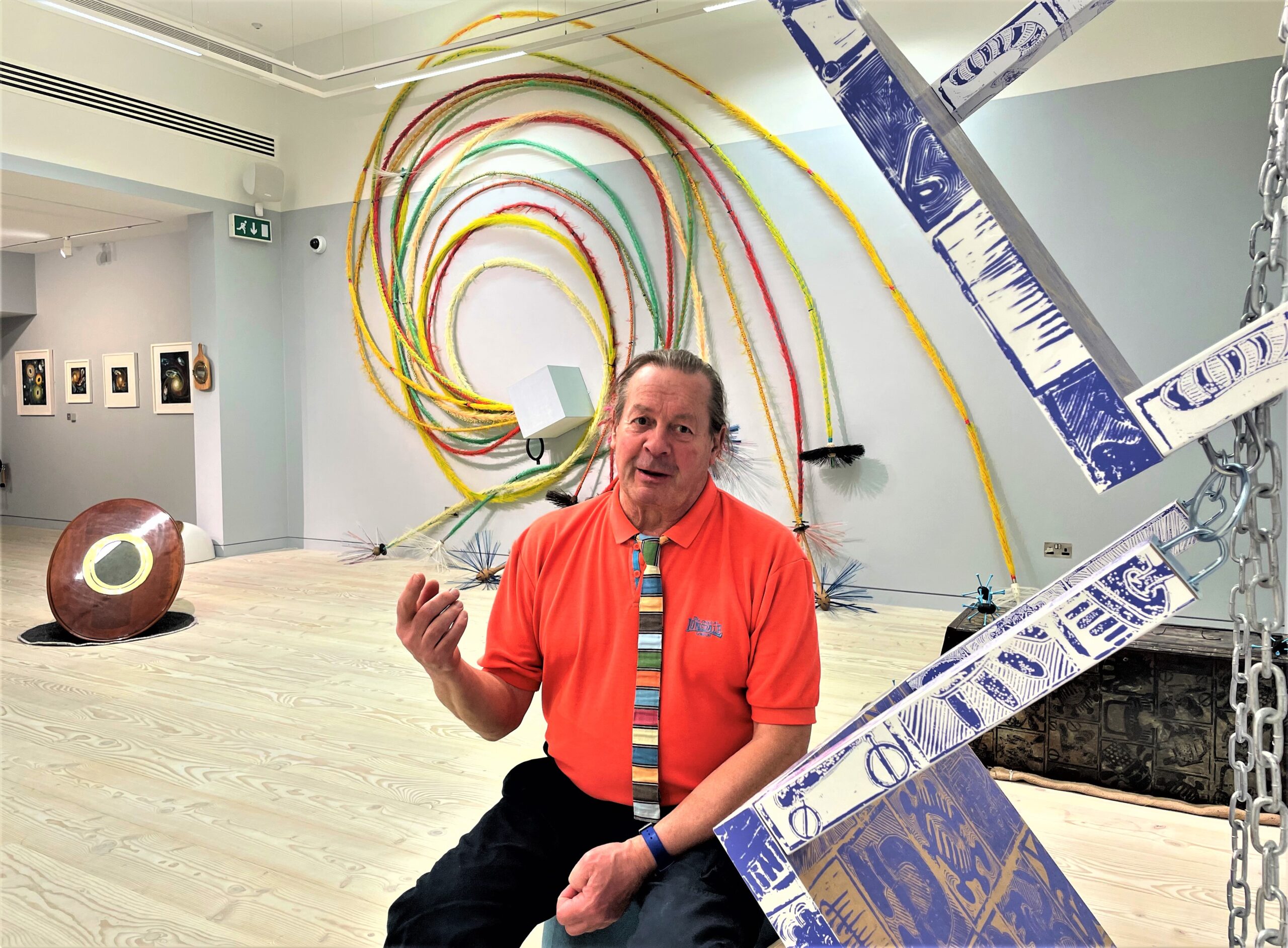 A cosmic interpretation of found objects from a chimney sweep’s brushes to the lid off a garden well have combined to create the first exhibition for nearly three years at the University of Hull Art Gallery.

Hull-based artist Andi Dakin is the man behind Energy, Matter and the Milky Way and will present a talk on Saturday, March 26, about the exhibition, which runs until Monday, May 2.

He said: “The exhibition is a fusion of two of my interests. One is the cosmos, everything about the cosmos is really fascinating for me. The other is taking artefacts and re-assigning them.

“The sculpture is very much about that, things that have been manufactured and have existed for a specific reason and I have cast them in a new light, often by bringing together things from different functional backgrounds.”

Broom Spiral, which dominates the exhibition in the space at the Brynmor Jones Library, brings together a chimney sweep’s brushes and some drainage rods as Mary Poppins fan Andi recreates Bert’s magic firework.

He said: “There’s a fire and water connection and they have been embellished and re-assigned and they imply a dramatic motion, a frozen moment in an energy-loaded swirl. A bit like a spiral galaxy.”

Views of the Milky Way from Cliff Lane in Bempton were created using the weather-beaten steel lid off a well which has long been filled with concrete and covered.

The paper was dampened in the shower of the house, the blotting took place in the kitchen, the steel plate was inked in the garage and the prints were made on the driveway, yards away from the original well.

Andi said: “We just drove over it lots of times, using the car as a printing press. The image is a view that you might see if you were inside the well and looking up at the Milky Way in a place where the light pollution is so minimal that you get to see our galaxy in a glorious way.”

Other components include ladles from a steelworks given to Andi 30 years ago and finally put to use, a mooring buoy found on the beach at Hunmanby Gap, and pitchforks brough from a Bempton antiques shop and now used to support a battered old wheelbarrow secured from some roofers after Andi offered his new barrow in exchange.

He said: “We’ve got off to a good start and I’m looking forward to the talk on Saturday. This is the best exhibition space in Hull. It has fantastic lighting and is constantly in a state of excellent repair, very secure and a large space that really helps to bring out the best of the work exhibited within it.”

John Bernasconi, director of the University of Hull Art Collection, said: “We haven’t been able to mount an exhibition for nearly three years so it’s terribly exciting to come back and I am particularly pleased that it’s a well-established, local artist who has created an exhibition that we think should be enormously popular with our students and the wider public.

“Andi’s work has great energy, it’s fun, it’s colourful and it’s exactly what everybody needs to cheer them up at the moment. We’ve got various other things in the pipeline but exhibitions everywhere are a bit fluid so we have a programme pencilled in which we will reveal as we go along.”

Energy, Matter and the Milky Way, sculpture and printmaking by Andi Dakin, is at the University of Hull Art Gallery, Brynmor Jones Library, until Monday, May 2.

Opening hours are 10am until 5pm Friday to Wednesday with extended viewing until 7pm on Thursdays. Admission is free and the public are welcome.

A talk by Andi Dakin will take place on  Saturday, March 26, at 2pm with free admission and no booking required.