From radio… to retail 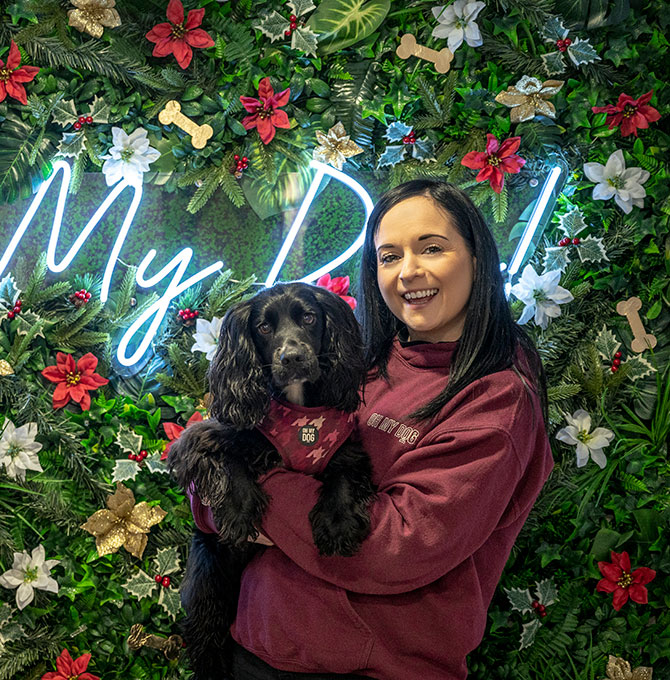 Lucy Clark was one of the most recognisable voices on local radio – until she gave it up to run her own business. By Sam Hawcroft

It’s fair to say it came as a shock to Lucy Clark’s loyal listeners when she announced in July that she was leaving her regular radio shows to concentrate on running her own dog accessories business.

Did she not love broadcasting as much as we thought she did? With her bubbly personality, unmistakeable Hull accent and clear passion for the city, she’d proved to be a natural from the moment she first got a call out of the blue to join Radio Humberside back in 2016.

“I love the radio,” Lucy reassures me, “and I miss it massively. I have left the door open…”

Of which more later. But let’s backtrack to 2016, when she joined hundreds of others queuing around the block to audition at Hull Truck for the Face of Hull 2017, the BBC contest to find a new presenter to report on the year’s City of Culture events.

She made the final 10 with a performance of her original poetry about Hull, but was pipped to the post by Kofi Smiles, who’s now the regular breakfast presenter. “I was so happy for Kofi when that was announced, and I thought, wow, what a great journey that was,” says Lucy. “Then two weeks later, I got a call from the radio editor saying they were going to start this new show called Absolutely Clueless, and I would be perfect for it. I just couldn’t believe it. I was so grateful and so happy to be able to do anything like that – I’m not your stereotypical BBC presenter.”

Lucy was an instant hit on the roving treasure hunt show, and it wasn’t long before she was invited to cover for a few of the regular presenters. “That was a whole new level to me,” she says. “I’d only ever been out and about with a microphone. The studio looked like an aeroplane cockpit, with all those screens and buttons!”

She went on a training weekend at Media City in Salford, which included presenting a 10-minute programme from the Radio 5 Live studio. “There’s little old me from Hull in the studio, chatting in a Hull accent. It didn’t go out live; this was all practice and training. After the 10 minutes, the trainer pressed the button and said to me through the glass, ‘Hi Lucy – was that all right? Did you enjoy that?’ And I just burst into tears. Even thinking about it now makes me emotional. Because I just couldn’t believe it. Here I was, sitting in the 5 Live studios overlooking Media City. It was a light bulb moment for me, and it made me realise how much I loved the radio.”

Lucy ended up with her own Sunday afternoon show as well as Absolutely Clueless, but at the time it wasn’t quite enough to fill up her week – and when Covid hit, she found herself with even more spare time. She’d always had it in the back of her mind that she’d run her own business one day, especially given that she grew up among a family of independent businesspeople. Her father Gary set up Chanterlands DIY and Hardware nearly 30 years ago, and you may recall a story on the BW website in August about Lucy becoming the third of the Clark sisters to set up a business in Beverley’s Dyer Lane.

“Even from being a little girl, I remember spending my summer holidays behind a stall at Trinity Market, where my dad started,” says Lucy. “Then he had his shop, and my sisters have had their businesses as well, so I’ve always been a massive advocate of supporting your local independents, knowing how important it is to my family.”

But she didn’t just want to start a business for the sake of it; she knew it had to be her passion. “I love doing my poetry, but that’s not really a business. What else could I do? I was thinking this while obsessing over my dog, kissing her every five minutes, not leaving her alone. The answer was staring me in the face.”

Lucy’s initial idea was to start online with her own brand of dog accessories, from harnesses, leads and collars to more fun items like bow-ties and bandanas – and then a shop became available for let in Dyer Lane.

“It was my sister Eve who sent me the link, and I thought, maybe this is meant to be – I knew what my passion was, and here it was right in front of me. A shop opposite both my sisters. And if the past two years have taught us anything, it’s that you don’t know what’s around the corner. Life’s too short, and if you want to give something a go, just go for it. Otherwise you’ll just live to regret it. So we just thought, right – we’re going for it!”

Having the support of her sisters was invaluable, she says. “If it wasn’t for them, I don’t think I’d be on Dyer Lane and it’s thanks to them that I’ve realised what a beautiful little street it is. Having them both close by means the absolute world to me.”

Another massive help when setting up the business was a Love Your High Street grant from East Riding Council, as well as the fact that Lucy’s husband Gary is an accountant. “He couldn’t put up a shelf, but at least he could build a spreadsheet…” she laughs. She kept the creation of her brand in the family, too, giving her vision to her niece Jessica Clark, who is the creative director of Hessle-based Blab Digital – and Oh My Dog was born.

Lucy does stock other brands within the shop, but insists that they too must all be from family-run businesses. “That was something that was really important to me – that when people buy from me, they’re also supporting other little independents.”

It’s really taken off – and not just in terms of the ringing of the till, but the steady stream of dog-lovers she’s enjoying meeting every day. “What’s great is that dog people are the nicest people,” she says. “I’m just dealing with lovely people all day. People just come here to show me their dog – because dogs are allowed in the shop, obviously.”

One of the most surprising aspects is the number of visitors she’s had from outside the area. “I knew we had a thriving tourist industry in East Yorkshire, but since I opened, I would say 50% of the people who’ve walked through the door have been tourists on holiday. And you can just tell they’re tourists when they walk in – for one thing, they don’t sound like me! I always make a beeline for them and ask where they’re staying, where they’re from, and give them recommendations on where to go. Many of them say they can’t believe how nice the area is.”

Although the shop is quite small, Lucy says she’d love to have more staff – and will be looking at local apprenticeship schemes so she can offer young people opportunities to learn life skills. She’d also like to enter the wholesale market and expand her brand to other boutiques around the country. “I’d like to build relationships with people who’ve already done it, and I think my first port of call will be to get a stand at a large trade fair, for example in the NEC. I went to one in September and I sought out the businesses who’d been backed by Theo Paphitis, because they were all like me – individuals trying to get into that wholesale market. I found one lady who hand-made bow-ties, and I loved them and bought quite a few for the shop. She said, ‘You’re the first shop my bow-ties are going to go into – I’m so happy, I could give you a hug!’ It’s things like that make you realise how much it means to people. And that’s what I’d like to do as well.”

Lucy still gets Radio Humberside listeners coming into the shop, and they’ll invariably pop their head in and shout her Absolutely Clueless catchphrase, “I’ve got the cluuuuuue!” She adds that it “means the world” that they have made the effort to come in and say hello, and stresses that it’s not quite the end of her radio career. She’ll be teaming up with Andy Comfort once more for a special edition of the show between Christmas and New Year. Beyond that, who knows? She’ll probably join the legion of other former Radio Humberside presenters who’ve checked out, but never quite left.

I couldn’t bring the Zoom interview to a close without being introduced to the inspiration behind Oh My Dog – Lucy’s beautiful cocker spaniel, Lily. “Here she is – this is all her fault!” says Lucy, as Lily appears on the screen. One thing’s for certain – as chief product tester, Lily has got to be the most pampered pooch in Beverley…