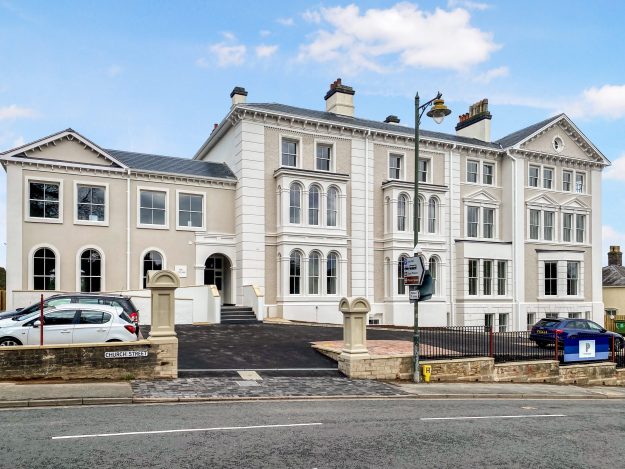 Keen interest in a high-quality conversion of a Georgian-style building in Great Malvern has already resulted in the sale of five luxury new apartments by estate agency Nicol & Co.

The progress comes as The Portland development on Church Street, where City & Suburban Properties are about to complete internal finishing, has been nominated for an award from the Malvern Civic Society.

The Portland – originally one of a pair of houses built in the late 1840s – has remained popular with home buyers despite the current lockdown, with numerous virtual viewings taking place.

Georgina McGorrigan, new homes sales manager at Nicol & Co, which has a new office in Malvern, said: “The Portland is an immaculately restored landmark building which has been thoughtfully divided to provide 12 luxurious new homes.

“We’ve had a lot of interest in what will once more become a prestigious address, and we’re delighted to have successfully sold five apartments in recent weeks, despite COVID-19 restrictions.

“Our new Gavl Livestream viewing technology has enabled us to take potential buyers around the development online, which has really boosted our viewing figures.

“We’re thrilled to be working on City & Suburban Properties’ development which has been nominated for a Malvern Civic Award, and we feel this development truly deserves such recognition.”

Malvern Civic Society has been making annual awards since 1994 for new or renovated buildings which add something special to Malvern’s built environment.

Portland House has impressive stuccoed exterior walls from when it was built as a luxurious private residence towards the end of the 19th century, and these have been retained along with other original features by the developers.

All apartments are fitted with high-end Elgar Kitchens and come with allocated parking, a lift to all floors and panoramic views of the Malvern Hills and across the Severn Valley.

Most of the apartments have outside space or a terrace and the location is just a short walk from Waitrose, the theatre and a great mixture of independent retailers in Malvern.