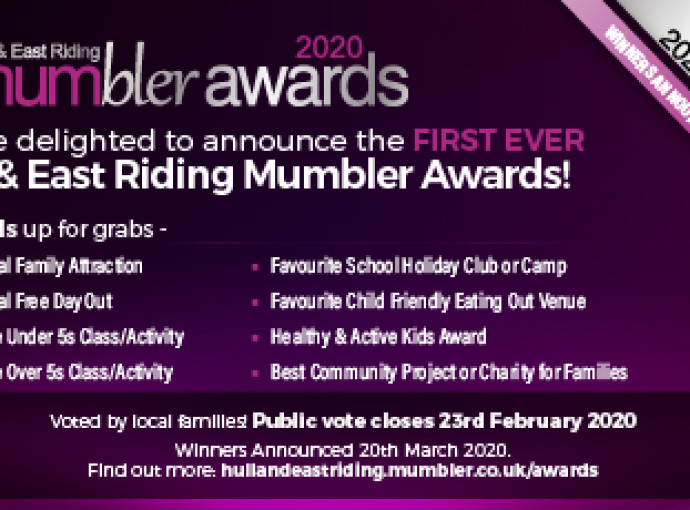 More than 10,000 nominations were submitted and the top five most nominated businesses in each category are now through to the finals. The public can now vote again for their favourite of the finalists. Voting opened on January 17 and will close at midnight on Sunday, February 23.
Well over 15,500 votes have already been cast, making it a fierce battle to see who is going to be crowned winner in each category. A list of all finalists and voting can be found at hullandeastriding.mumbler.co.uk/awards/shortlist-vote/.
The eight voting categories are:

The winners will be announced at an awards ceremony at the Mercure Grange Park Hotel in Willerby on March 20 from 7pm.
The Hull & East Riding Mumbler is a website that lists and shares all things to do with children across the area. The awards aim to recognise and celebrate all of the best family activities and attractions in East Yorkshire.
Built and run by local woman Rachael Smith, Mumbler will be five years old in March.
Rachael said: “Five years ago I had a newborn baby and a three-year-old and no idea what there was to do in the area with them. Through building and running the Hull & East Riding Mumbler I have been surprised and delighted by how many incredible activities, classes, attractions and events we have locally for families.
“I wanted to give them all the recognition they deserved. The first ever Hull & East Riding Mumbler Awards will celebrate the businesses that wouldn’t usually appear on a local business awards platform. The awards ceremony will be held on the five-year anniversary of the launch of Mumbler.”