‘Find your passion – and don’t look back’ 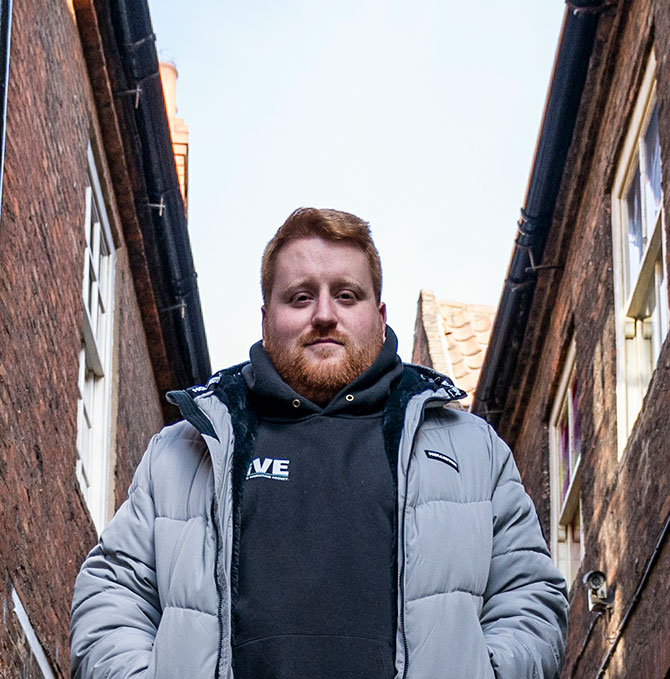 When Rhys Peachey started his digital marketing business during the first lockdown, he was determined to do things differently, writes Sam Hawcroft

Lockdown forced many people to rethink their lives and make changes. Rhys Peachey didn’t hang about, though – he quit his job on the first day.

He’d been working for a marketing agency at the time, but he knew it wasn’t really working out. “It wasn’t the route I wanted to take in life,” says Rhys. “I didn’t like having people above me. I liked being in charge. The day before lockdown started, I woke up about 6am and I felt really groggy and tired, like I had the weight of the world on my shoulders. I worked out straightaway that the reason was my job. So I quit – which was an amazing decision to make as lockdown began!”

Rhys is also open about the fact that he’s had mental struggles in the past, and he describes himself as “lucky” to have been able to spot the signs before it was too late. “When I didn’t feel very well and my head was funny, I knew immediately what was wrong. But there are a lot of people out there who don’t know they’re unhappy in their job – or they do know, but they don’t make that decision.”

Looking back, though, he jokes that it might have been a bit risky, given that the Covid shutdown was to last far longer than perhaps most of us had anticipated. But after he set up what was originally Rhys Smith Media, he made sure he sat down and thought it through. “I’ve always been very careful with the decisions I make because I’ve got ADHD. And with that, there’s a big thing around making decisions that are not always thought out, so I try to teach myself not to just rush into anything, because that’s what I normally did.”

At least lockdown gave Rhys the benefit of a bit more time to learn more about the world of business management, which he had studied at college – but no course in the world can prepare you for starting out on your own during a pandemic. He spent his evenings and spare time researching, as well as watching the YouTube videos of the US entrepreneur Gary Vaynerchuk, founder of VaynerMedia and the restaurant booking app Resy.

Restaurants are one of Rhys’s big passions, too, and high street businesses became the focus of his new digital venture. The first lockdown period proved to be fruitful because when bounce-back loans were made widely available, Rhys had a queue of business owners looking to spend money on marketing, but as 2020 wore on, the growing uncertainty made people less willing to part with their cash.

Rhys was well aware that he was entering a crowded industry – but says he took a bit of a different approach when looking to find his place in the market. “I did a lot of research straight away, which is what I’d recommend to anyone setting up a business. I looked at every single agency I could find and what they were doing. And the one thing a lot of people do is try to pick fault with what their competition does. I mainly asked myself, what are they doing that I can do – and what are they not doing that I can do? So we’ve tried to do more than social media – we’re also a high street marketing agency. We’re the only one in Beverley town centre.”

There’s a perception that bricks-and-mortar businesses are perhaps less amenable to spending money on digital marketing, but this is a barrier Rhys is passionate about breaking down. And it’s not just about encouraging them to promote themselves to a local audience, but to think a bit bigger, too. “We’ve got a nice mixture of clients,” he says. “We’ve got restaurants, estate agents, a travel agent, an electrician, an IT company, a bus travel firm – and we’ve found that when you try to target one sector, you do attract lots more. And what we’re trying to do is say to them, yes, you have got people walking past your shop, but have you thought about the people who are coming for the Christmas festival, or on the bus trips from Newcastle, London, or even Leeds and Hull? There are a lot of people who have hardly left their homes in two years and they might not know where you are.”

Realising he needed to work “on” the business rather than “in” it led to Rhys taking on his first employee after just five months. “Thinking back on it, it sounds scary – I employed somebody, and I was in charge of that person. But I felt at the time it was the right decision. I knew I had enough money to pay for them. And once I’d got them in, we were able to work on getting more clients.”

Rhys now has a team of eight, and the Government’s Kickstart scheme has helped him fulfil another passion – bringing more young people into the creative industry. “Schools and colleges, for me, don’t push creative design enough,” he says. “That’s why I really wanted to do the Kickstart scheme and take on 16 to 24-year-olds who have not been given that chance before. Two of them have been taken on full time – one’s our head of creative content, and one’s our lead designer now. So it shows that it’s been worth it.”

There are, however, nine members of the team listed on the ViVE website. Harley the dog is head of emotional wellbeing, a responsibility that must weigh heavily on her furry shoulders. It’s a whimsical way of demonstrating the company’s serious commitment to the mental health of its staff, something that’s common of a lot of young, fresh firms that are disrupting the accepted ways of working. “I’ve struggled with my mental health, and had two breakdowns in the past, and getting the support for that was a big thing for me,” says Rhys. “I gave everybody options around working from home or in the office, and they all said they wanted to be at home one day a week, but they loved being in the office as it helped their mental health – which was the opposite of what I thought they’d say.”

Rhys knows that a progressive approach – offering his staff flexibility, support and understanding – is more likely to see them enjoy work and stay with the company. “We always work from home on a Friday. And if you’re not feeling 100%, then you can work from home. If they text me in the morning and say, ‘I’ve got bit of a headache – I can still work, but can I work from the comfort of my own home?’ I’m not going to say no. Because I’m the same. Sometimes you just don’t really want to get dressed and go out. You can work, but you just don’t really want to be around people. I’m fine with that.”

Every morning they have a quick session to get everyone’s creative juices flowing. Rhys will give them five random words and they have 10 minutes to create an advert. “I would hate for people to just sit at their desk, start working and that’s it. I like them to have a bit of fun first. It’s about looking after everybody. That’s why I quit my job originally, why I didn’t want to work for anybody again, because I didn’t have the trust that I could find somebody to look after me as a boss. So that’s why I’m the complete opposite to that, and I want to look after every single person I’ve got working for me – but they don’t work for me, they work with me.”

Originally from Warwickshire, Rhys had moved to Beverley with his mother when he was 16. She didn’t like it, but he did, so he decided to stay and move into a flat on his own. He fell in love with the town, as well as with his future wife Leah. His sister Becky lived around the corner, and Rhys describes both her, his parents and Leah (whom he married earlier this year) as his biggest supporters.

“When I left school,” he says, “it seemed like you had a path destined for you from year nine. When I started my business, pretty much every person in my life except my family said, don’t do it. You’re going to regret it. This is the wrong thing for you. And now, 18 months later, I get to sit in my office and say, I told you so!”

He’s still passionate about Beverley­, but to say he’s ambitious to expand beyond the town would be an understatement. “The ultimate goal for me is to open up an office in London and then over in America, to be able to work with international clients.”

Being able to grow his business so quickly has given him time to work on his own personal “brand” so he can fulfil his mission to teach and inspire others. He’s still only 25 – but is full of advice for younger people who might be hesitating about following their dreams. “Go for it – make sure you’ve worked it out, and then do something you love. Find that passion. Don’t hold back – and don’t listen to other people’s negative comments.”

This doesn’t just have to apply to younger people, either, he points out. “I don’t think it’s ever too late to change your life. You could be 50, 60, but if you’ve got a passion, do it. It sounds a bit cringey, but you’ve only got one life, and you don’t know what’s going to happen tomorrow.”

That said, don’t expect to go viral on social media overnight. You do have to put the work in, he cautions. And sometimes, you can go viral when you least expect it. “It’s often the case, especially with TikTok, that you’ll spend an hour creating a video and 10 people will see it; you pick your phone up and film yourself for five minutes, and a million people will see it and your life changes forever.”

I can confirm this is true. The very next day, I took a quick photo of a tree and it got about 250 likes on Twitter within hours. It might not have changed my life, granted, but it proves Rhys’s point that you never quite know what might capture people’s imaginations, and that if you try too hard to go viral, you probably won’t…