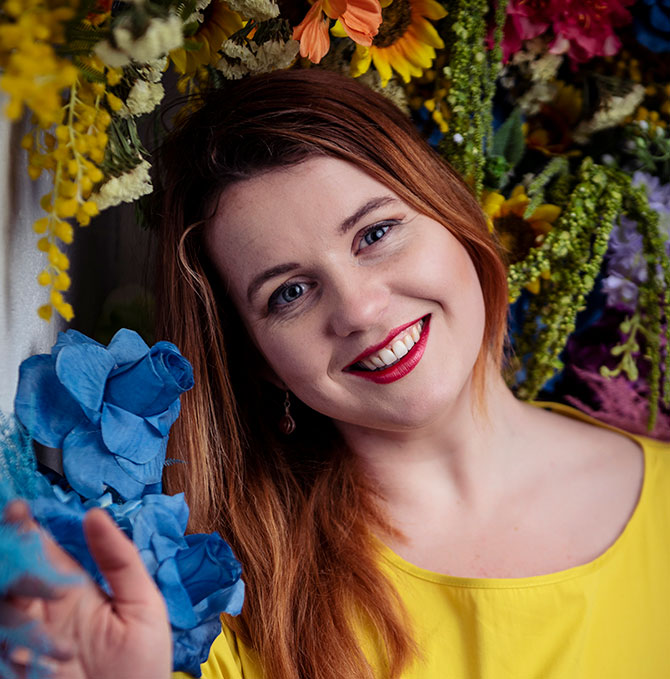 I first met Milly on the FEO 360 course last year. I knew from the engaging way she spoke that she would be a great candidate for an entrepreneur feature in BW – she definitely had a story to tell.

And what a story it turned out to be. She told me how she had battled severe depression over many years, endured an abusive relationship, and become a single mother to an autistic son, along the way to launching her own award-winning face-painting business in 2016.

Milly, 29, had always had a passion for art, which was further fuelled by a teacher who’d said she shouldn’t have picked the subject for GCSE as she wasn’t good enough at it. “I thought, right – I’m going to prove you wrong,” she says. “I had this fire in my belly. So I went to speak to another teacher and asked what I needed to do to succeed.”

This teacher, Russ Martin, who would become a mentor to Milly throughout her young life, supported her through the course – and she passed without dropping a single mark. “I also asked him for help in my A-level art,” she adds. “Because it’s all about the criteria. This has been one of the cruxes of my adult working life, too: asking the questions, rather than thinking, oh god, I can’t do it, because you can – you just need to know how.”

But during her A-levels, depression hit her “like a ton of bricks”.

“I’d never known anything like it before,” says Milly. “I couldn’t speak, I couldn’t breathe. Every time I went into the sixth form I just felt this overwhelming sadness.”

Her mother took her to a GP and she was prescribed medication, which made things a little better for a time, but, as Milly says, once the black dog had been unleashed, it was always hanging around in the background. She began her art foundation studies, but six months in she was still struggling – so, on a whim, she decided to pack her bags and head for London.

“I started a little vintage clothing stall at Camden Market. I was only 18. But of course, with zero experience in business, working or independent living, it didn’t work. I lasted about four months before my mum had to pick me up. I was even more poorly than I had been the year before, as I’d almost gone into manic mode. Mum took me to the doctor again, and he said, ‘I think you might be bipolar.’ And as soon as he said that, everything started to click into place.”

However, Milly’s condition worsened and she ended up in hospital for five weeks. She was then discharged to her mother’s house, which, aged 19, she felt was less than ideal – so thought the “best thing to do would be to get myself a boyfriend”. She met a man online who was 17 years her senior, and soon found herself trapped in an abusive, controlling relationship. “I was still on medication and not really seeing everything as it was – and about six months in I was hospitalised again as I was really, really unwell,” Milly says.

After another spell in hospital there came another bombshell – she was six months pregnant. Milly finally managed to flee from her partner and began a new phase of life on her own, aged 21, with a baby son.

Milly took a job at Chequers micropub in Beverley and juggled this around days off caring for her son, paying for nursery when she had to work, and using food banks to make ends meet. But she knew she wanted more than just to exist.

“I had a lot of trauma to process. I’d had a lot of hurt and pain, and I was not confident at all. It was almost like I was this tiny little version of who I am now. I could see that there was something more, but I didn’t know what – and so I thought, right, what did I like to do before? I knew that I loved drawing and painting.”

So Milly bought herself a cheap set of paints and a canvas. “I knew that if I bought them, I wouldn’t be able to afford treats for that week! But I was like, do you know what – I want this. It was an April morning, and the sun was shining through the window and my son was in his little highchair. I painted a picture of me and him, and I popped it on social media – and it got such a good response, with people saying, ‘Can you do me one?’ I realised that I did love to paint, I was good at it – what if I could do it as a business?”

Then someone asked whether she could do face painting at a fire brigade open day. She borrowed a set of paints from a friend, went along and had a go. She admits her first attempts weren’t all that great – but was taken aback by the “instant gratification”. Her art was right there, on a smiling child’s face; she didn’t have to wait weeks for it to be seen in a gallery. It was a true lightbulb moment – and she immediately set about researching the art of face painting, learning as much as she possibly could. A whole world of creativity opened up before her as she discovered a global online community of face painters.

In 2017 she signed up for the Prince’s Trust Enterprise programme, a scheme for people under 30 who want to start their own businesses. Course leader Gren Clark proved to be “so supportive, and a massive cheerleader, and he still is now” – and a modest grant funding injection of £150 allowed Milly to buy the equipment she needed to get going.

Then, in 2018, she discovered the FEO Ignition programme. “That was phenomenal,” says Milly. “It was a seven-week course that was free to access, and took you through running a business – but to the next level. I just loved everything about it – the dynamic of it, and that business owners ran it and invested back into the people attending. FEO chief executive Jan Brumby was so welcoming and enthusiastic about building business in the region, too.”

It was to change Milly’s life in more ways than one. She was invited to make a short film about what she expected to gain from the course. “I sat down to do this video and, well, the guy behind the camera was the most beautiful guy I had ever seen in my entire life. I ended up asking him for a drink – and the rest is history…”

The cameraman in question was Brendan Storch, of Hull-based INIT Creative, who proved to be a “rock” for Milly as she developed her business, and they now make a great professional team, too, with his company providing the in-house videography and marketing for Fantastic Faces.

In 2019, Milly was named the Prince’s Trust’s entrepreneur of the year, with the nomination and support from her mentor Mike Doyle, and then she joined FEO and became part of its NxGen group, delivering talks in local schools. Now, she helps facilitate the FEO Ignition course that set her on the road to business, and she is also training to become a mentor for the Prince’s Trust. “I am passionate about helping people start their own business and have a belief that, no matter where you come from, you can make a success with the right attitude,” she says.

Fantastic Faces went from strength to strength, and Milly won large-scale contracts with organisations including St Stephen’s shopping centre and both Hull and East Riding councils. With a packed diary ahead, 2020 was set to be Milly’s best year yet. Then, of course, came Covid, which plunged her into another depression. “I was absolutely devastated,” she says. “I’d worked so hard.”

But the online community was to be her saviour, as she’d got to know a network of face painters through a convention just before Covid hit. She won the UK Face and Body Art competition with a beautiful self-painting and gained recognition in the industry. It helped her develop business coaching as another string to her bow – and during lockdown she also launched a business selling vintage clothing on eBay, which brought in vital income while she was unable to paint people’s faces (which is a tad difficult with social distancing).

You often see face painters at village fetes up and down the country. What makes Milly’s business different – and scalable? “We make sure that each person that’s in the chair feels like they are the most important person in the world,” she says. “We take pride in our quick, beautiful designs, and do lots of training in downtime. We buy the best paints in the industry, run training courses – and we’re now a face painting supplier, too. We work with wedding venues, businesses – including corporate family fun days – private family events, community youth engagement… we cover all sorts.”

It’s not just the painting, either – it’s the little extras that all add up to make a great experience. “I think, how can we make the event special? How can we inspire people? If it’s a birthday we’ll bring the birthday child a present, we aim to delight at our high-end party packages… and if there’s time at the end we will paint balloons, for example, making sure that each design is different.”

All of Milly’s painters have a background in the arts, so quality is assured. “They’re DBS-checked as well, and they really do go above and beyond,” she adds. “The only way I knew I could expand was to bottle the energy that I have – that every single person is made to feel special – and make sure they have this too. I’ve got a really wonderful set of people who work for me – they’re creative, brilliant, and committed as well. I aim to inspire them, and think – what would I like from a boss?”

This Milly has achieved with great success, as her team is now eight-strong. They have just moved into a new studio in the K3 building in Clough Road, Hull, where she’ll be running workshops and hosting parties. “People can come in, learn, and buy the paints they want to use to do it themselves. Or have a special intimate party, painting canvases and making memories.”

Two more accolades have since followed – last year Milly was named winner of the National Market Traders Federation Young Traders Award for the Hull region, as well as Young Entrepreneur of the Year in the HullLive Business Awards.

Just before I bid Milly farewell in our Zoom call, I can’t resist one final question. How many people mention Peter Kay’s Phoenix Nights, and the bloke who went around looking like a tiger for months because the face-painter used permanent paints?

“Everyone!” she laughs. You can be reassured that all of Fantastic Faces’ products are cruelty-free and vegan-friendly – and the paint will come off… when you want it to.