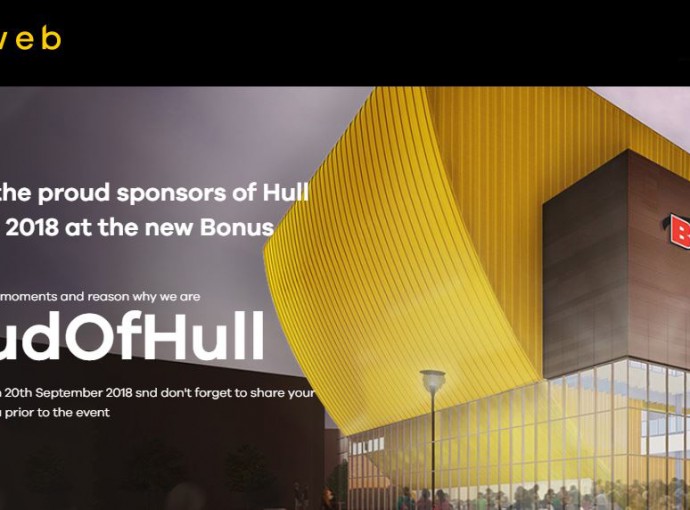 In the run-up to the fourth annual Hull Digital Awards, Hessle-based creative agency Eyeweb has launched #ProudOfHull, a new Twitter campaign designed to celebrate life and success across the city. The company is sponsoring the drinks and reception area at the Digital Awards 2018, which will be held on September 20 at the new Bonus Arena.
As part of the campaign, Eyeweb is reaching out to its local clients and people all over Hull on Twitter – asking them to share all the things that make them #ProudOfHull. The campaign will run until the Digital Awards, with the best submissions being featured on a dedicated website at proudofhull.co.uk, and at the awards reception.
Paul Scott, managing director at Eyeweb, said: “The digital and creative community is thriving in Hull, and we’re extremely proud to be part of it. Over the past year, our agency has really grown – we’ve taken on several new staff members, invested in bigger premises and our client base has increased exponentially.
“Hull is fast becoming an important centre for the digital industry, and it deserves to be celebrated – which is why we’re sponsoring this year’s Digital Awards. There’s so much good work going on, and it’s great to see it recognised at a high profile event.
“#ProudOfHull is the natural extension of this celebration. It isn’t just the digital industry that’s doing well – the whole city is thriving. We wanted to promote just how successful Hull has become as a whole over the past few years by inviting the community to share the unique experiences that make them proud of our city.”
To be part of the campaign, simply tweet using the hashtag #ProudOfHull. The Eyeweb team will select the best tweets to be featured on the big screen at the awards reception.
The Digital Awards will bring together the digital community, recognising the achievements of the companies and individuals at the cutting edge of digital business and innovation across the region. Awards will be presented across 11 categories, covering digital marketing, ecommerce, digital innovation, hardware, mobile applications and emerging technology.
Additional information about the Digital Awards can be found at thedigitalawards.net
Eyeweb is one of the region’s leading digital marketing and creative agencies. Established in 2002, it offers a full range of branding, website design and digital marketing services to clients in a range of industries, regionally, nationally and worldwide. Additional information about Eyeweb can be found at eyeweb.co.uk