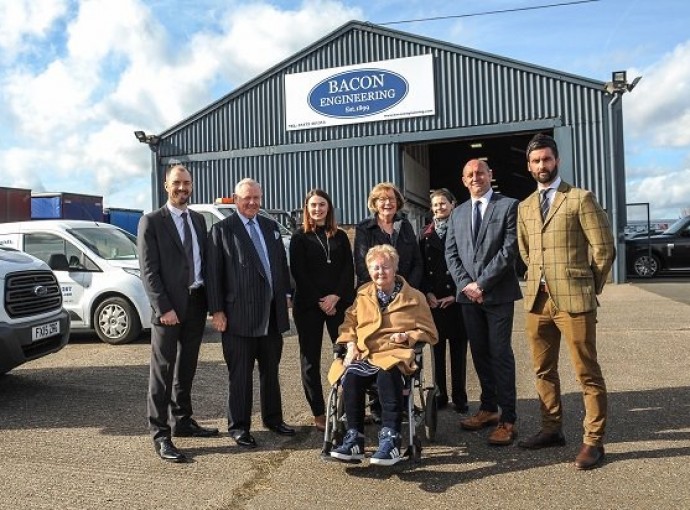 Bacon Engineering, the long-standing Grimsby family business, recently celebrated the opening of its new premises as it moves from the fish docks for the first time in its 120-year history; marking the end of an era but the start of an exciting new chapter for the company.

Managing director Steve Cook said: “This is a huge moment for us – we are really looking forward to the opportunity the new premises will give us to progress and move the business forward.”

Formerly known as E Bacon & Co Ltd, the company was founded in 1899 by Edwin Bacon Snr, known locally as the ‘Governor’. Bacon’s has a fascinating history, with its highs and lows very much intertwined with the fortunes of the town.

As the fishing industry boomed in the early 1900s, Bacon’s prospered; during the early decades it came to own many trawlers, becoming a large local employer not only on its trawlers but also across a myriad of support functions it provided including engineering, carpentry, plumbing, blacksmith and victualing services for its fleet.

During both world wars, the Royal Navy’s Admiralty requestioned a number of the company’s trawlers to assist with the war effort, with the boats often carrying out dangerous North Sea minesweeping duties from which they wouldn’t return. During the second conflict, the Governor also helped to purchase two Spitfires on behalf of the town which were named Grimsby I and Grimsby II.

Then, as the fishing industry began to decline, and the docks saw many once thriving businesses fail, Bacon’s battled for survival through many tough years in the ever-demanding economic climate. During this time it had to significantly scale back its footprint, closing the support functions and selling off the trawlers, albeit not before, quite famously at the time, the last act of recorded piracy in British waters occurred on one of its boats off the coast of Germany.

It was in 1981 that the late Ross Bacon had the unenviable task of selling the last of the Bacon’s trawlers. It was under his stoic and resilient stewardship that the company focused solely on providing precision engineering services. They specialised in providing traditional manual lathe machining and welding services to its varied client base around the region.

However, in recent years it has started to develop a comprehensive fabrication service while actively modernising its machine shop with new CNC lathes and milling machines. It is this evolution that has led to the need for the company to relocate, as it has outgrown its old Hutton Road premises.

Bacon’s long-standing chairman, John Clugston, spoke at the opening ceremony. He said: “The fantastic progress of the company has been hindered in recent years by our aged premises on the docks. This new facility offers us the space to develop and move to the next level. It is an exciting and significant moment for us.”

Local Grimsby MP, Melanie Onn, who also addressed the guests at the ceremony, said: “It is great to see a local long-standing family business, with a fascinating history, taking really positive steps forward. This move can help them be at the forefront of the Great Grimsby industrial resurgence.”

The company currently employs 16 people but is looking to expand its workforce once it fully completes the migration to the new premises.

Mr Cook added: “It is an exciting time for the company, as we now have significantly more space in which our teams can operate and expand. This, along with having recently received our ISO 9001 quality management certification and BS EN 1090 structural welding accreditation, means we can now also carry out larger-scale work. This move is not only helping us to modernise, but gives us the space to invest in new equipment, while expanding and growing our workforce.”