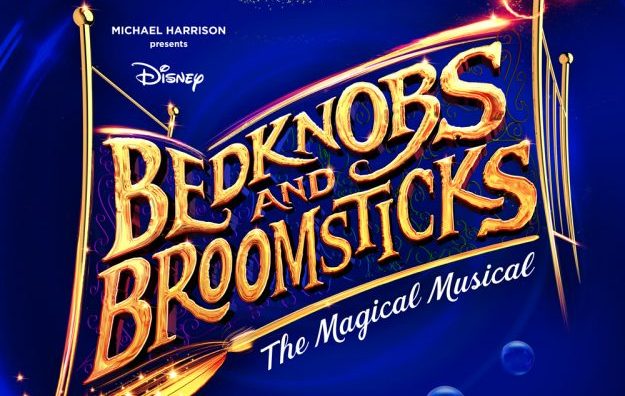 Wolverhampton Grand has today announced that the world premiere tour of Michael Harrison and Disney’s BEDKNOBS AND BROOMSTICKS musical will fly into the theatre from Tuesday 5 – Saturday 9 April 2022 with tickets on sale this week!

BEDKNOBS AND BROOMSTICKS will be sale to Friends of the Grand and members from 8am on Wednesday 12 May with public booking opening at 8am on Friday 14 May online only at grandtheatre.co.uk.

Producer Michael Harrison said: “As theatres across the UK & Ireland prepare to reopen, I’m thrilled that so many want to host our exciting new production of Bedknobs and Broomsticks; so we are extending this world premiere tour. Bedknobs and Broomsticks will be one of the biggest shows on the road this year with a cast and crew of over 70 people to bring this classic story to magical life on stage.”

Enter a world of magic and fantasy with Disney’s classic movie BEDKNOBS AND BROOMSTICKS. With the original songs by the legendary Sherman Brothers (Mary Poppins, The Jungle Book, Chitty Chitty Bang Bang), including Portobello Road, The Age Of Not Believing, The Beautiful Briny and new music and lyrics by Neil Bartram and book by Brian Hill, BEDKNOBS AND BROOMSTICKS will be brought to life by award-winning theatre-makers Candice Edmunds and Jamie Harrison.

When the three orphaned Rawlins children are reluctantly evacuated from wartime London to live with the mysterious Eglantine Price, they have no idea what adventures lie ahead. Upon discovering Eglantine to be a trainee witch, they join forces to search for a secret spell that will defeat the enemy once and for all. Armed with an enchanted bedknob, a bewitched broomstick and a magical flying bed, they encounter surprising new friendships on their journey from Portobello Road to the depths of the beautiful briny sea.

BEDKNOBS AND BROOMSTICKS is produced by Michael Harrison by special arrangement with Disney Theatrical Productions.

Also going on sale is:

RUSH – A JOYOUS JAMAICAN JOURNEY on Tuesday 16 November tells the story of Reggae music and the Windrush Generation and how their music took the world by storm. Narrated by comedian John Simmit and featuring ska, rock steady, calypso, gospel, lovers rock, dancehall and Reggae played live by the JA Reggae Band. Get ready to dance to the music of Desmond Dekker, Jimmy Cliff, Bob Marley, Lord Kitchener, Millie Small and many more.

BRING IT ON the hit Broadway musical starring Amber Davies and Louis Smith back-flips into the UK, landing in Wolverhampton from Wednesday 26 January – Saturday 29 January 2022.

Cheer-royalty and newly crowned Squad Captain, Campbell, should be embarking on her most cheertastic senior year at Truman High School. But when she’s forced to move to the neighbouring hard-knock Jackson High, Campbell fears her life is over. But an unlikely friendship catapults Campbell back into contention with a powerhouse squad and the fire to achieve the impossible.

FOOTLOOSE is back and better than ever from Monday 4 – Saturday 9 July 2022 following two critically acclaimed tours and a West End run.

City boy Ren thinks life is bad enough when he’s forced to move to a rural backwater in America. But his world comes to a standstill when he arrives at Bomont to find dancing and rock music are banned. Taking matters into his own hands, soon Ren has all hell breaking loose and the whole town on its feet. Based on the 1980s screen sensation which took the world by storm, FOOTLOOSE sizzles with spirit, fun and the best in UK musical talent. With cutting edge modern choreography, you’ll enjoy classic 80s hits including Holding Out for a Hero, Almost Paradise, Let’s Hear It For The Boy and of course the unforgettable title track Footloose.

All new shows will be sale to Friends of the Grand and members from 8am on Wednesday 12 May with public booking opening at 8am on Friday 14 May online only at grandtheatre.co.uk.