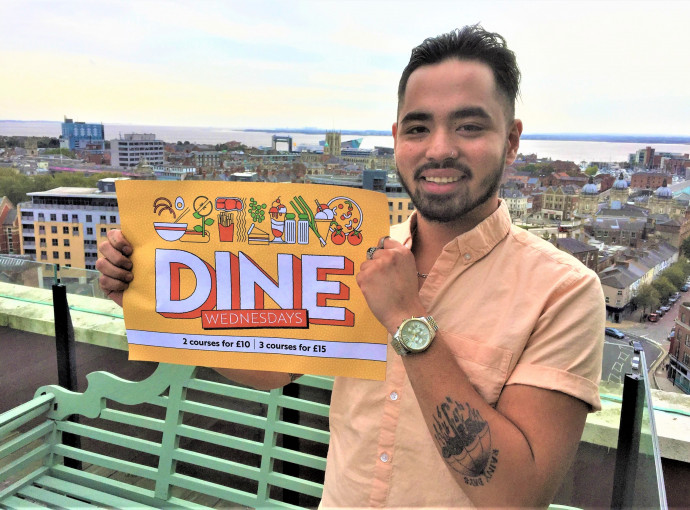 More than a dozen restaurants, café bars and pubs have combined to reduce prices for Dine Wednesdays, with foodies looking forward to tucking in to a variety of cut-price cuisines.
All the venues taking part are adhering to the most rigid Covid-19 precautions as they embrace the initiative that will see them serve up two courses for £10, with many creating special menus.
The deals will be available every Wednesday until the end of November. Service will be from 4pm with last orders at around 8.30pm depending on demand as operators stick to the 10pm curfew. Some eateries have said they will also offer the discounts during the afternoon.
Mac de Leon (above), who stepped in just over a month ago as manager of the Junkyard Café Bar at the K2, has created a special menu with starters of bruschettta pomodoro and teriyaki chicken wings followed by mains of pollo alla marsala and falafel burger. The full-price main menu will also be available and features starters including garlic king prawns and buratta with miso-marinated cherry tomatoes and an extensive selection of mains including fish, steaks, burgers and a range of salads and sandwiches.
The big attraction of the Junkyard is its location on the 12th floor of the K2 tower, with Covid-19 precautions extending to include the two lifts.
Mac said: “The restaurant opened in August 2019 as a family business run by friends of mine. I came in just over a month ago as manager and business has been going very well.
“It’s a fantastic location – the only place where you can dine with a cityscape view and on a nice day the roof garden upstairs is even better! But I found that 80 per cent of my friends didn’t know where it was so I’m doing a lot more on social media. We have also changed the menu and the cocktail menu and we’re getting new people coming in.
“Eat Out to Help Out was really busy and it’s good to be able to follow that with Dine Wednesdays. We’ve created a special menu which will hopefully attract people in to see what we do. We’ll also have the main menu available.”
Furley & Co in Princes Dock Street will offer a £10 deal of a light bite as a starter followed by anything off the main menu with one or two exclusions. It will include the specials from the new curry night – tikka, Thai red or green curry and the red hot scorpion chilli curry and offers will be available from midday.
Kathryn Shillito, HullBID executive director, said: “Feedback from the food and beverage sector in the city centre indicates the Eat Out to Help Out scheme helped immensely in challenging times but there were concerns about what would happen next.
“Some of them continued the Eat Out offer at their own cost because they saw it as a good way of rewarding regular diners and showcasing their food, drink and service to new customers, but we are stepping up to offer support to the sector as a whole.”
HullBID is promoting and facilitating the scheme by printing and distributing marketing materials including pop-up banners, flyers and window vinyls and with activity online and on social media.
Kathryn said: “HullBID has a strong track record for supporting the food and beverage sector, most recently with Hull Street Food Nights which have attracted thousands of people into the city centre.
“Dine Wednesdays is designed to dish up some great food discounts, introduce diners to our fantastic pubs, restaurants, café bars and hotels and hopefully keep them coming back for more.”
The other venues taking part in Dine Wednesdays are the White Hart in Alfred Gelder Street, Thieving Harry’s in Humber Street, Little Somboon Kitchen at the Taphouse in Humber Street, Bert’s Pizza and Gelato in the Fruit Market, Solita at Freedom Quay, the Minerva in Nelson Street, the Sailmakers Arms in High Street, Temptation in St Stephen’s, Tanyalak in George Street, the Omelette in Albion Street, the Whittington & Cat in Commercial Road and the Kingston Theatre Hotel in Kingston Square.