Developer to start work on transformation of former brewery building 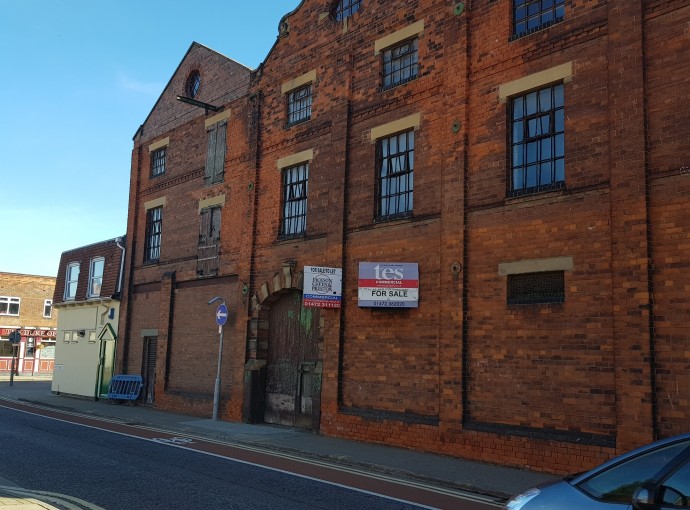 Adrian Smith, director of Church Lane Humberston, said the renovation of the Cooperage in East Street should be complete by February 2020 to create 20 apartments and two new townhouses.
The Cooperage was built in 1901 and made barrels for the nearby Tower Brewery which was operated by Hewitt Brothers. The business later became part of the Bass Charrington empire but brewing on the site ended in the late 1960s and the building has been empty since then.
Mr Smith said his acquisition of the building was conditional on securing planning permission for the residential development. He said the deal would now go ahead, and he praised the efforts of Hull-based architectures and planning consultants Eznat and of the planning services team at ENGIE, who worked with North East Lincolnshire Council.
He said: “I became interested in the Cooperage because it’s in a very good location and I considered it to be one of the few good buildings in Grimsby which was available. The problem was planning – over the past 15 years there have been many attempts to secure planning permission for various projects, but they have all been refused.
“We knew we would be up against it to get residential planning permission, but we decided to try and I am delighted that we have succeeded and can now move forward. ENGIE, who were working with the local authority, were very helpful and Eznat did a brilliant job.”
The 20 apartments and two townhouses in the new-look Cooperage will all have secure, gated parking and will benefit from innovative and unobtrusive heating and insulation systems which will keep down energy bills. The building will also be bathed in a lighting system designed to show its architectural features.
Mr Smith said many of his previous projects have involved renovating buildings and selling them on, but he plans to retain the Cooperage and has appointed regional agents Stanifords to manage the sales.
He said: “When we converted the Imperial Hotel in Cleethorpes into apartments we decided to keep it and we will do the same with the Cooperage. We recognise there is rising demand in our area from people working in the offshore and renewables sectors and from young professional people and we are aiming to cater for that. Overall the value of the investment is around £1.8 million. We want to start work by the beginning of June at the latest and we aim to complete it by February next year.”
Joe Bvumburai, director of Eznat, added: “Because so many planning applications for the Cooperage have been rejected we approached the project very carefully, partnering with Palmleaf Architects and working closely with the planning team and the conservation officer at North East Lincolnshire Council.
“We also invited Heritage England to the site to get their input and the result is that we have come up with a plan which will halt the decline of the Cooperage and deliver a development which is sympathetic and complementary to the building’s history.”
Paul Staniford, director of Stanifords, said: “The Cooperage is a fabulous building from a bygone era and Eznat have come up with a very sympathetic conversion scheme which includes a lot of revealed brickwork, retaining one of the key features of the building’s heritage as part of the old brewery.
“It could not be better situated. The location is close to the law courts and the local authority offices and it’s walking distance to the rest of the town centre amenities. Grimsby can expect to see more projects like this as the town presses ahead with its regeneration programme and it’s great to be a part of that.”