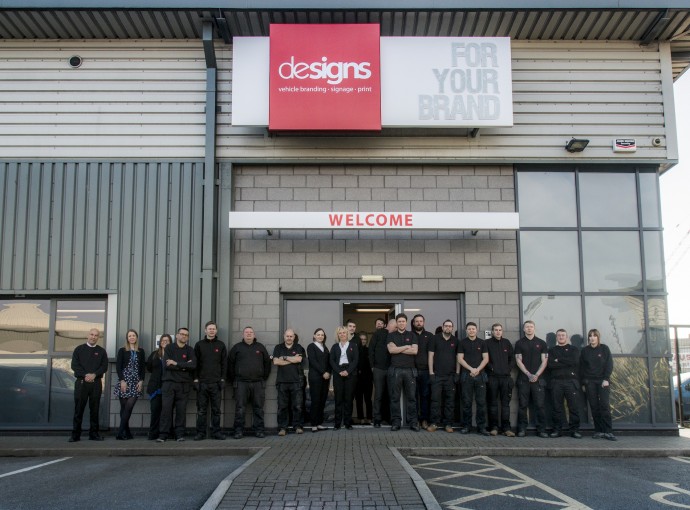 Signage and vehicle branding company Designs’ latest campaign has proved to be a huge success, after collecting hundreds of donations from Hull residents.

After calling out for the public’s support as part of the company’s ‘It’s a Wrap’ campaign, Designs attracted city-wide attention, with video coverage of the donations reaching over 13,931 people across social media.

The campaign called on the people of Hull to donate any additional gifts or essential items to drop-off points across the city, which were then delivered to three charities in a bespoke Santa’s Grotto on wheels, which Designs created by specially wrapping one of their own vehicles.

The gifts were then donated to local organisations Barnardo’s, Hull Women’s Aid and the Preston Road Women’s Centre.

Both managing director Rob Daysley and the team at Designs have thanked local residents for coming together to help families in need over the festive period who, without the support of the community, may not have received any gifts at all on Christmas Day.

The three charities have also reached out to thank the public.

Michelle Donnelly of Hull Women’s Aid said of the campaign: “The donations we received from Designs’ ‘It’s A Wrap’ campaign were a massive help to us here at Hull Women’s Aid. Many of our families have previously had a difficult time during the Christmas period, and often their memories have not been the happiest. The gifts they received enabled them to start their new lives with happy memories.”

Alison Ashton of Preston Road Women’s Centre said: “We work with many women who find themselves in positions where they have to leave their homes and belongings to ensure their family’s safety, which can mean that at Christmas they have very little in terms of presents. The donations we receive enable us to support women to come to the centre and select presents to bring joy and happiness to their children, and relief to parents.”

Debbie Grey of Barnardo’s said: “The donations we received from Designs were absolutely brilliant and will go towards helping a number of people in all areas of our work here at Barnardo’s. As well as being distributed to our five youth clubs, some of the toys will be used within therapy sessions, and to help with sensory integration for numerous young people.”

Following the campaign, an ongoing partnership has been forged between Designs and the three local charities, with further activity being organised throughout 2019 to help some of the most vulnerable residents in Hull.

Rob Daysley, managing director at Designs, said: “Having worked within the Hull community for 25 years, the team here are keen to help those that may be struggling with everyday life. The three chosen charities are ones that we feel strongly about and hope to be able to support further in the future.”

As one of the UK’s leading signage and vehicle branding companies, Designs work across a wide range of sectors, with major clients including Premier League and European football clubs. As experts in wrapping, the business employs more than 35 people, and work on projects in industries including retail, education, commercial and property development.