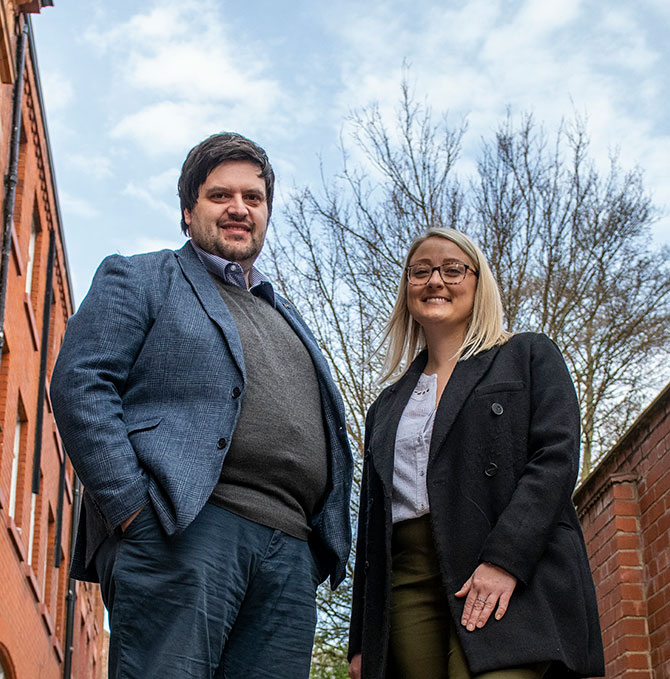 Nick Cranwell and Emily Proctor founded Green Ginger Digital just before the pandemic hit – but they’ve had a hectic first year, as Sam Hawcroft finds out…

Green Ginger Digital’s logo is clean and simple – the company’s name alongside a vertical rectangle.

Except it’s more than just a rectangle. It actually represents what’s said to be England’s smallest window, which, as surely all Hullensians know, can be found at The George pub, down The Land of Green Ginger – which has to be England’s most intriguing street name, come to that.

It’s a heritage that Green Ginger Digital founders Emily and Nick are keen to celebrate. “We’re genuinely proud to be a local business,” says Nick. “We’re both from the area, and we both wanted to create a vibrant, positive, passionate business that was proud to promote everything to do with Hull.”

Emily hails from just the other side of the Humber Bridge – but she had her Yorkshire passport stamped some time ago. “We spent a lot of time thinking of what we were going to call ourselves, and we wanted something that was a nod to Hull,” she says. “But you have to be from the area to get that connection. And that’s the same with our branding, which has the famous window in our logo. We also work with a lot of fantastic brands further afield and it’s always an interesting story when we talk about our brand.”

Between them they have almost 20 years of experience, having worked at one of Yorkshire’s leading digital marketing agencies with top brands including Argos, The Range and Jaguar Land Rover. But they’d long harboured ambitions to start their own business together, particularly as they felt they could make a difference for a variety of smaller, ambitious firms who were looking to grow. “I’d really enjoyed working with brands that may be a little earlier on in their online journey – the SMEs, where we could really make an impact and add real, tangible value to them as a business,” says Nick.

At the beginning of 2020, they took the leap and set up Green Ginger Digital. And we all know what happened next, of course.

“Maybe, with hindsight, that wasn’t the best time,” says Nick, “as it was right at the start of the pandemic, but one positive that came out of that was we were able to help businesses through that period. I think the experiences that we’d gained from working with bigger brands allowed us to support other people with their digital marketing and online performance. Some really struggled through Covid, while others had the opposite problem in that they saw a big increase in demand for their services, and it was about helping them manage it and maintain it.”

Hull has a burgeoning digital community – C4DI in the Fruit Market quarter is probably what first comes to mind when thinking of the city’s main tech hub, but there’s a tight-knit hotbed of agencies in the Old Town, too. How can Green Ginger Digital stand out in what seems to be a very crowded and competitive market, I wonder?

From the outset, Nick and Emily decided they would not try to be all things to all men – they would play to their strengths. “What we really wanted to do was to create a disruptive digital agency that really focused on the digital marketing element of online,” says Nick. “There’s a lot of agencies that build websites, they do creative, they do branding, they do marketing – but we wanted to rip that up a bit and be something different. We know what we’re good at and that’s digital marketing.”

And there is less a sense of rivalry than camaraderie along the cobbled streets whose centuries-old warehouses and grand merchants’ offices are becoming increasingly populated by a young industry that isn’t weighed down by convention or formality. “We’ve just moved into a new office – Salter’s House, down the High Street, and there are a number of similar agencies close by,” says Emily. “It’s more about, ‘what do you do that we don’t?’ – collaborating, connecting and doing a great job for our clients, rather than rubbishing the competition. We don’t want to be like that.”

Those who may live in a more analogue world might take one look at Green Ginger Digital’s website and be baffled by the range of services on offer. PPC, SEO, PLA… sounds like your average episode of Line of Duty. But digital marketing is becoming ever more essential to stand a chance of being seen, whatever industry you’re in – and Nick and Emily know it can seem bewildering, which is why they are there to help SMEs demystify the process and take the hard work out of it. The night before I spoke to them, I’d spent hours lining up a month’s Instagram posts, so I know time-consuming it is, and that’s just one social media feed. Coming up with a clear digital strategy and keeping on top of it is tough for one person to achieve when they’ve got a million other jobs to do.

“A lot of clients come to us and say, we need a digital agency – we need help – but they don’t really sometimes understand what that means,” adds Emily. “So for us it’s actually breaking it down, finding what they want, whether that’s sales, traffic or boosting their visibility online, and then we create a bespoke package. We want our services to be really tailored and adapted based on the specific needs of each client, that’s how we operate with each and every client to grow their business”

To help businesses find out exactly what they might need, Green Ginger Digital offers a free digital healthcheck, from which they can make a list of recommendations. Areas they can help include Facebook and Google advertising, Amazon marketplace, SEO (search engine optimisation – in other words, making it easier for people to find your website), and pay-per-click (PPC). They even offer training packages for when businesses feel ready to take their digital strategy in-house.

Emily and Nick describe paid media and SEO as their “bread and butter” – it’s where they’ve helped some of the biggest brands drive customers to their business. There’s a lot of negative talk about “clickbait”, the “you’ll never guess what happened next” method of marketing; sites that do this might have lots of lovely statistics to show their paymasters, but whether these amount to meaningful engagement is doubtful. It doesn’t engender much respect or brand loyalty – often quite the opposite. “It’s very easy to drive quantity,” says Emily, “but we go after quality. One of the things we often get as feedback is we’re really transparent – we share so much data with our clients, to show the value of every single person who enters their website, because ultimately if we’re sending bad traffic, you’re not going to get the leads or sales.”

“It’s the type of industry where there’s a lot of buzzwords thrown about,” says Nick. “But ‘trust’ is probably under-utilised. We want to build trusted relationships with clients where they trust us with their budgets, their strategy – their business, effectively.”

Despite the challenges of Covid, they’ve worked flat-out during the past year (“I don’t think we’ve slept!” laughs Emily) and grown to a team of four, with Marcus Robinson and Molly Symonds-Hall coming on board in March as digital marketing manager and executive respectively. Nick and Emily’s own experience in finding employment informed their approach to recruitment, as they’d struggled in the past with that familiar conundrum – being turned down for a job because you have no experience, despite your qualifications. Molly’s background was in graphic design and, in her own words, found herself stagnating in her career and applied for Green Ginger Digital “on a whim”. It was her drive and initiative that impressed Emily and Nick, and she’s hit the ground running. “She’s new to marketing, but she had a real passion and that came across in the interview,” says Emily. “We want to give that help to people who want to get into the industry and hopefully we’re a little bit more receptive to that than people were to us.”

Our new team has really allowed us to support our clients more effectively, adds Nick. “Marcus has a lot of extensive industry experience, working with some amazing clients but also sharing our core values as a business”

They’ve reinvested in the business, but exponential growth is not their goal. Again, it’s quality versus quantity. “We want to continue having those really good one-to-one relationships with clients – that’s really important for us,” says Nick. “Obviously we’ve got ambitions to grow, but we’re not going to become a 50-person agency.”

They’re experts at marketing for other businesses – but what about marketing themselves? How did they go about getting their name out there as a start-up in the midst of a pandemic? “It can be tricky,” admits Nick, “as our clients come first and it’s often the last thing on our priority list, but we’ve had some amazing support from a lot of people. We’ve joined For Entrepreneurs Only and done some high-profile talks for the BT Skills Shop, and we’ve leveraged our personal networks with people in the industry.”

Another huge boost was Emily winning a place on this year’s Top 30 Under 30, which, as the scheme’s organisers say, is more than just an award. Not only does it recognise the best young talent across Hull and the Humber through its awards ceremony and social media promotion for a year, it rewards the winners with a place on the LEAP programme, which is a transformative 12-month training experience. “For me, that’s going to be an amazing thing to be part of,” says Emily, “and it will also help promote us as an up-and-coming business in the local area that invests in our staff.”

It’s been a whirlwind year, and if they have any regrets at all it’s that they didn’t take the leap sooner. “We maybe spent a year umming and arring and not being particularly happy where we were,” says Emily. “We could have saved ourselves that year and been a little bit further ahead – but that’s all with hindsight. I think you’ve just got to be brave. If it doesn’t work out, it doesn’t, but at least you can say you’ve done it. So, don’t live with regret and be ready to work really hard.”

Would-be entrepreneurs often find the idea of business planning daunting, but there’s no blueprint for what works and what doesn’t, Nick argues. “The reality is, our plans went out of the window after two months. It was one of those times when you realised it was new territory for everyone, nobody really knew what they were doing, and I think you’ve got to be flexible, reactive and resilient. If you’ve got the skills and that mindset, then I think anyone can start their own business successfully. There’s never a perfect time – if we can start in a global pandemic and get through that, then anybody can.”