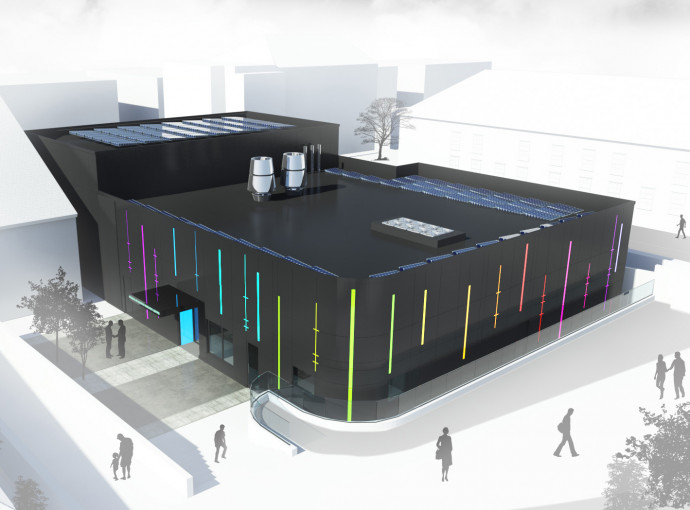 The Daisy Appeal has also released the first pictures of the state-of-the-art complex that will improve accuracy and detection rates for cancer, heart disease and dementia in Hull, East Yorkshire and North Lincolnshire.
Professor Steve Archibald, of the Positron Emission Tomography Research Centre at the University of Hull’s Faculty of Health Sciences, said: “It’s a really impressive building that looks like it’s come down from outer space and landed on the hospital site. Patients don’t go in there but they benefit from what comes out.”
The Daisy Appeal’s objective is to establish an internationally renowned scanning centre at Castle Hill using positron emission tomography – computer tomography (PET-CT), which is a fast-evolving medical imaging technique with huge future potential in the diagnosis and detailing of a number of disease processes.
The charity funded a research and development facility – the Daisy Building – which opened at Castle Hill in 2008 at a cost of £8.5 million and followed that by opening the £4.7 million Jack Brignall PET-CT Scanning Centre in 2014.
Activity in the research and development centre has brought in about £6 million in funding and grant income over the past nine years and the number of diagnostic scans at the Jack Brignall Centre has risen from 2,287 in 2015 to 3,020 in 2019.
March 2020 was the busiest month yet and the MIR Centre will add a significant new dimension by enabling scanning of other diseases including cardiac and neurological problems and antiviral and infection research, with the Daisy Appeal looking to acquire a second scanner.
The new centre will produce fluorine-18, gallium-68 and carbon-11 based radiotracers to be delivered direct to the immediately adjacent Jack Brignall Centre with the combined site becoming a world leader in dose-on-demand technology – a specific radiotracer at the correct dose precisely when the clinician needs it for injection into a patient.
Prof Archibald said: “What we want to do is see what’s going on inside you and see that to a great level of detail. The excitement is about what’s developing and finding signs of things like Alzheimer’s before they develop. We want to get clinical trials going on and new therapies developed in Hull.
“The cyclotron at the university has been operating since 2014. It was the first scientific centre of this type in the world and it’s been brilliant for pushing our research. We are already getting global recognition for some of the work that we have been doing over the past five years.”
David Haire, project director (fundraising) for Hull University Teaching Hospitals NHS Trust, said the coronavirus lockdown pushed the project back when construction had to be suspended.
He added there may also be delays if quarantine measures affected the travel plans of technicians arriving in the UK from across Europe to help with the completion but the hope is that the space-age computer generated images of the building just released by the Daisy Appeal will soon become reality.
Mr Haire said that recruitment of specialist staff was continuing and it was anticipated that about 25 would be working in the scanning and research centres and the associated university facility by the end of this year.
He said: “Work has resumed but not at the same pace because of social distancing restrictions so we are looking at the end of September for completion of the building works. That will be followed by installation of the equipment, which is state-of-the-art, and it is a demonstration centre and a national reference site so we have designed the building to be complementary to that.
“It is hi-tech, modern, sleek and it will be the first in the country that has this dose-on-demand facility to produce radioisotopes linked directly to the PET-CT scan centre. That brings a fundraising challenge which continues in terms of the initial capital cost and the early-years running costs of the centre as research and clinical trials activity is developed.”
Professor Nick Stafford, chairman of the Daisy Appeal, which he founded in 2002, said: “The work we are doing in Hull is already developing an excellent international and national research profile and reputation and the new centre will help us build on that.
“We are now creating a setup which will be able to expand its use across a very wide band of medical conditions, progressing to cardiological and neurological scanners in the next couple of years and a significant role in forthcoming viral research. The next five years will see this geographical area become a real centre for PET-CT development and the opportunities that will bring are immense.
“Initially I thought the whole thing would have cost £2.5 million but by the end of it the total will be £13 million and we will have one of the finest setups in the country mainly because of the ability we have to put it all on one site.”
To find out more about the Daisy Appeal and to make a donation please visit daisyappeal.org