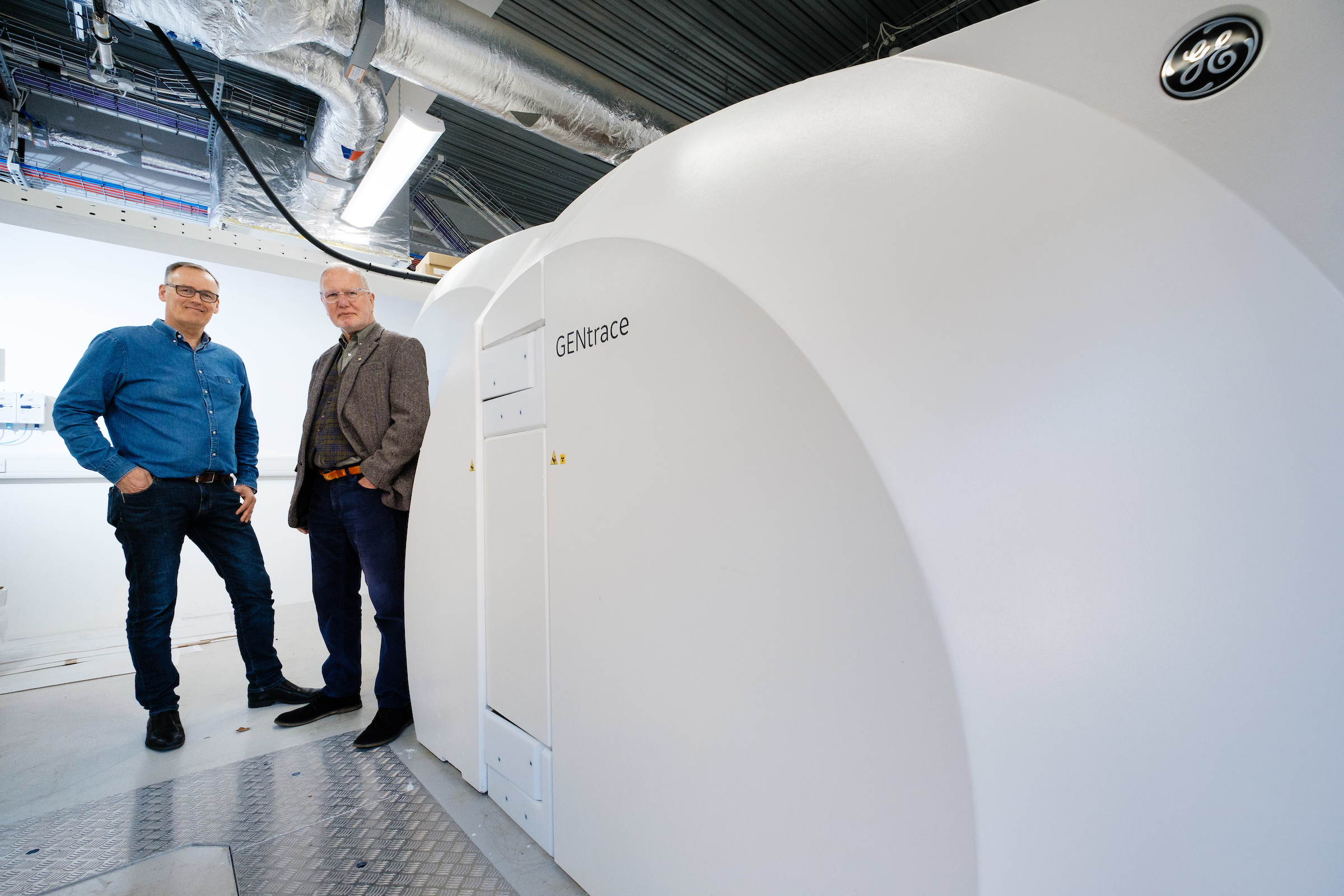 A charity that is working to offer UK-leading detection and personalised treatment facilities for patients with cancer, heart disease and dementia has unveiled the equipment inside the new £8.8m Molecular Imaging Research Centre (MIRC) which it will move into this summer after the disruption of Covid.

Prof Nick Stafford, chairman of the Daisy Appeal, was joined by Lars-Olof Arlasjö, project manager from GE Healthcare, on a tour of the new facility at Castle Hill Hospital, Cottingham.

The pair unveiled the Daisy Appeal totem outside the new centre and then undertook a brief tour of the facilities including GE Healthcare’s GENtrace 600 cyclotron, which was delivered in October and has now been assembled.

They also saw the hot cells that have been in place for two years and have now been set up by technicians from the Italian manufacturer Tema Sinergie.

Prof Stafford said: “It’s been a long haul because of Covid and various technical difficulties but we are here now and by the summer we will be starting to use the equipment. It’s great to see something that we have planned for a decade coming to fruition.

“We decided to buy the cyclotron about four years ago and Covid is the main reason everything has taken so long. The hot cells have been in since before Covid but the technicians from Tema Sinergie in northern Italy haven’t been able to come over to set them up.”

Mr Arlasjö, who manages projects across Europe and is based at GE Healthcare’s site in Uppsala, Sweden, said: “This is the first GENtrace 600 cyclotron in the UK and that is an important step for us but because of travel restrictions I haven’t been to Castle Hill since the cyclotron was delivered in October.

“It has been really good working with the team here so it is great to see how things have been growing at the site and to see the results of a lot of hard work.”

Since 2000 the Daisy Appeal has raised more than £20m to fund cutting-edge research and state-of-the-art equipment and facilities.

The Daisy Appeal Medical Research Centre opened at Castle Hill Hospital in 2008 and was followed, in 2014, by the opening of the Jack Brignall PET-CT Scanning Centre, housing the first in a new type of Siemens scanner in the country.

Once up and running the centre will initially be able to produce fluorine 18 radiotracers, which are currently used in most scans but which are made elsewhere in large scale production units. During the next two or three years the centre will also be able to produce carbon 11 radiotracers, which have great potential for neurological and cardiological use and will open up other opportunities.

The total cost of the new centre is around £8.8m, including equipment to the cost of about £3.5m, about £1m of which is accounted for by the cyclotron. The Daisy Appeal is closing in on its target and will continue fundraising to cover running costs.

Prof Stafford said the work being done in Hull has led to the University of Hull becoming a member of the elite UK PET Network, joining Imperial College London, King’s College London and the universities of Cambridge, Cardiff, Edinburgh and Oxford. He added that the work was also attracting interest from organisations including the Medical Research Council and Cancer Research UK.

He said: “This investment establishes us as a UK leader and one of the best in the world not only in terms of the service but also with regard to research and development, which is just as important because it will attract the best research-based scientists to come and to work at a centre which is now established and recognised internationally.

“There will also be considerable economic benefits from raising the region’s profile with a project which is unique in the UK, generating high-quality jobs and creating opportunities in the local supply chain.”