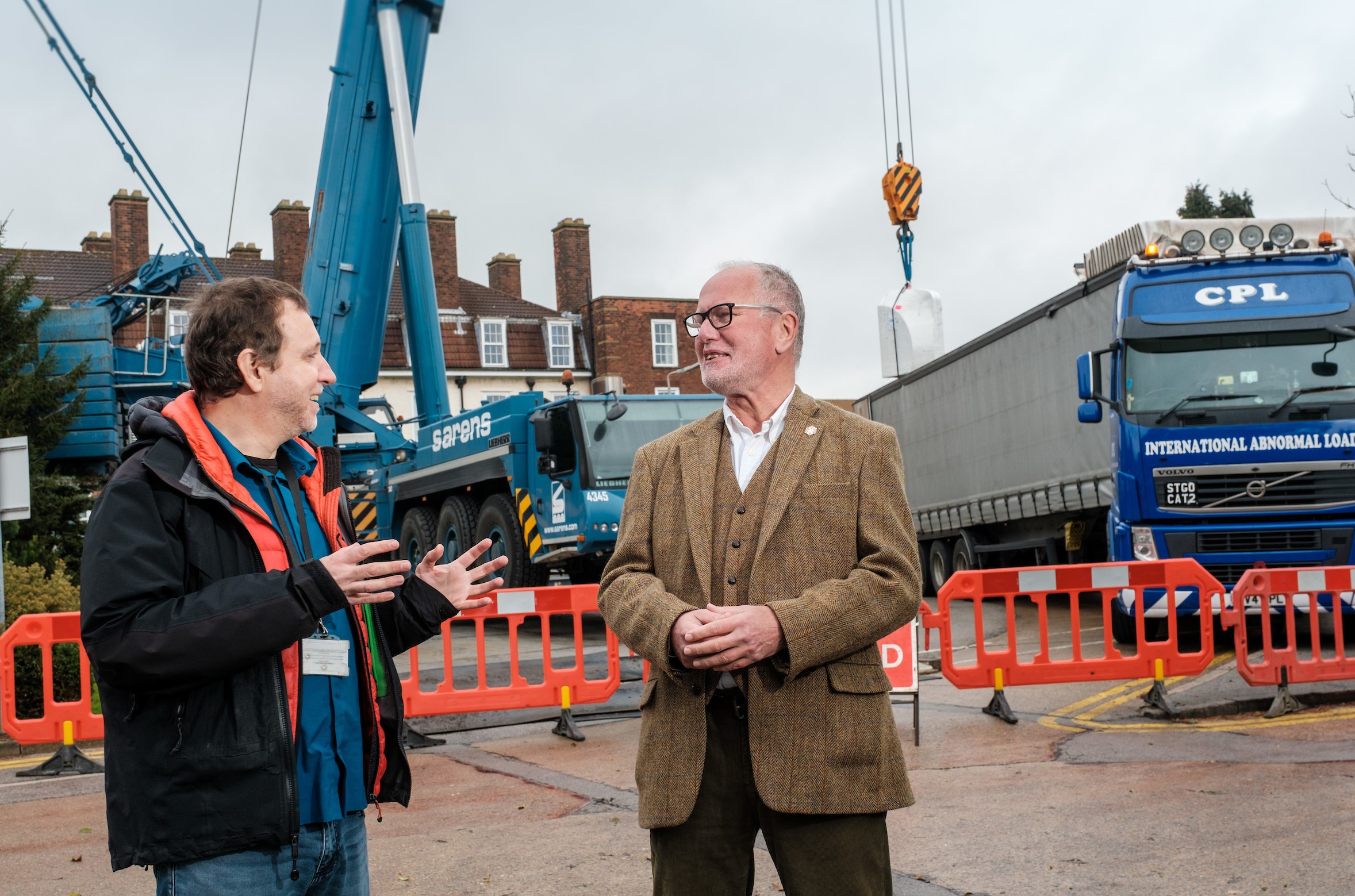 A charity that is working to develop “dose-on-demand” radiotracers with improved detection and personalised treatment for patients with cancer, heart disease and dementia has taken a big step towards its goal with the delivery to Castle Hill Hospital of a consignment of UK-leading PET-CT scanning and research equipment.

Prof Nick Stafford, founder and chairman of the Daisy Appeal, said the arrival of the 30-tonne GE Healthcare GenTRACE 600 cyclotron was “a very exciting day for the charity and the healthcare community in our region.”

Prof Steve Archibald, professor in Molecular Imaging at the University of Hull, said the technology would maximise benefits to patients from across East Yorkshire and Northern Lincolnshire by making available a wide range of imaging and diagnostic techniques.

Prof Archibald added that his team will be able to attract more clinical trials to the region. Prof Stafford said the project will also bring considerable economic benefits including raising the region’s profile with facilities which are unique in the UK, and generating high-quality jobs.

The cyclotron components arrived at Castle Hill Hospital, Cottingham, and were transferred in a series of crane lifts over the roof of the admin building to the loading bay at the new Molecular Imaging Research Centre (MIRC).

The pieces will be assembled in the new building over the next two weeks and the cyclotron will become operational early in 2022 as the latest piece in a jigsaw that Prof Stafford has been working on since he launched the Daisy Appeal in 2000.

The Daisy Appeal Medical Research Centre opened at Castle Hill Hospital in 2008 and was followed, in 2014, by the opening of the Jack Brignall PET-CT Scanning Centre, housing the first in a new type of Siemens scanner in the country.

But with the radiotracers used in the Jack Brignall Centre having a short life span, the Daisy Appeal’s vision was to raise funds for the MIRC and pursue a “dose-on-demand” approach by making their own isotopes.

The total cost of the new centre is around £8.5m, including equipment to the cost of about £3.5m, about £1m of which is accounted for by the cyclotron components.

Once up and running the centre will initially be able to produce Fluorine 18 radiotracers, which are currently used in most scans but which the Daisy Appeal previously had to source elsewhere. During the next two or three years the centre will also be able to produce Carbon 11 radiotracers, which have great potential for neurological and cardiological use and will open up other opportunities.

Prof Archibald said: “The technology from GE Healthcare matches our unique approach to ‘dose-on-demand’ radiotracer production which will make a wide range of imaging and diagnostic techniques available. This will maximise benefits to local patients.

“The provision of cutting-edge cyclotron technology in Hull elevates us to the level of a handful of clinical sites in the UK and, when combined with our expertise and our own unique technology, will enable us to deliver improved clinical imaging to diagnose and monitor treatment response in cancer, cardiac and neurological patients.

“The technology will also improve our research, which is already internationally competitive, and attract clinical trials to Hull to further improve standards of patient care.”

Prof Stafford said: “The delivery of the cyclotron really sees the whole PET-CT project finally coming to fruition. The MIRC will become operative next year, at which point patients will benefit from our ability to manufacture personalised radiotracers tailored to the requirements of their disease on site.

“The cyclotron puts us in the top tier for this work in the UK and also opens up the opportunity for us to make carbon based radiotracers which have exciting new applications in cancer, cardiac and neurological imaging. It is a very exciting day for the Daisy Appeal and the healthcare community in our region.”

The Daisy Appeal has raised more than £20m to fund cutting-edge research and state-of-the-art equipment and facilities. Hull-based construction company Hobson & Porter built the Jack Brignall Centre and the new MIRC, which is due to be formally handed over to the charity later this year.

Claire Levy, Daisy Appeal fundraiser, said: “One of the most important aspects of fundraising is having the ability to show donors how their money has been used to deliver on the charity’s aims and objectives.

“The Daisy Appeal has already brought enormous benefits to patients from across the Hull and Humber region with the Medical Research Centre and the Jack Brignall Centre, and the delivery today of a cyclotron is another huge step forward.

“We are grateful to all the businesses, communities and individuals who have played a vital part in helping us to reach this milestone, but the journey continues. We are closing in on our target of £8.5m to complete the MIRC and we will then focus our efforts on meeting the substantial running costs.

“We would like to hear from anybody who can help us, whether with sizeable corporate donations or small amounts from community events because, as we have demonstrated over the last 20 years, it all adds up”.