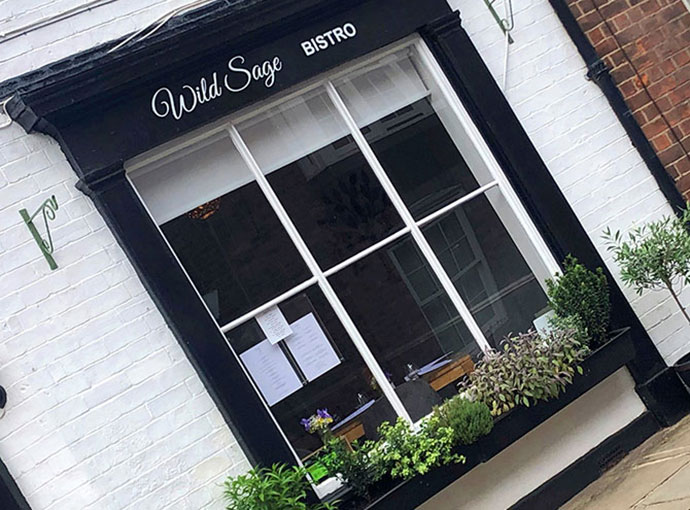 It was a year to the day since our unfulfilled quest for crab in Hornsea. The staff in a newsagents told Jayne we might be able to buy a live crab if we went down to the landing, which just made me pleased that we weren’t asking for a bit of pork, beef or lamb!

In desperation, I asked a butcher if there were any fishmongers giving him a bit of competition. He replied yes, but only in Bridlington.

Later, a mate directed me to Waxholme, just north of Withernsea, where the fish dealers in one of the business units sold us two lovely, full crabs and couple of pots of crab pate. They also tipped us off about Tony 2 Tides, who has since opened a shop in Keyingham and makes occasional appearances at the Kitsch Market in Hull.

I love crab but so many wet fish shops have dried up that it’s hard to find a good one, so these memories came flooding back as we perused the menu at Wild Sage and chatted to Becky Flower, who shuffles between the roles of chef and front-of-house in the cosy, classy restaurant that she has opened with her partner, Mark Langton.

With just the two of them it’s a small team, operating in a compact space with a menu and wine list to match. Anybody who remembers Becky and Mark from Cucina 1884 in Hessle will recall a spacious, open-plan theatre kitchen enabling diners to get up close and personal with the food prep and feel the heat from the wood-fired pizza oven.

Wild Sage is different. It’s not as fancy, because not many places are. Current capacity is about 14 and opening is limited to five lunch/brunchtimes a week and only three evenings. All of that might increase but not by much because the priority is to keep things manageable, provide a personal service and not get distracted by chasing big numbers.

Mark was head chef at The Wilson, which evolved into 1884 Wine & Tapas Bar, and then at Cucina. In between he worked at 1884 Dock Street Kitchen, where he met Becky, a former head chef at Cerutti 2.

By the time Cucina closed at the beginning of 2020 the couple were already progressing their plans to take on the home of a former vegan café in Lairgate, Beverley. They signed the lease in February 2020 and then found themselves with plenty of time to apply the finishing touches as lockdown delayed the opening until August.

There wasn’t much they could do so they concentrated on keeping the décor smart and simple, with the most prominent features on the walls being the specials boards. The loos are upstairs but there’s no likelihood of being able to expand service to the first floor. The fireplace on the ground floor is unlikely to accommodate anything more warming than a couple of lanterns because there isn’t the space to shuffle the tables around.

But the room has a tranquillity that quickly turns into a buzz as two lunchtime diners become four, then six, eight and a couple with a toddler. I’d expect evenings to be different again with a candlelit intimacy as darkness descends. There’s only one way to find out.

Becky says she bagged the front-of-house role – in addition to prepping the food and making all the desserts – because she’s more patient than Mark. It certainly comes naturally to her, and it makes a difference having a chef available to talk you through the menu and the provenance of the ingredients. Withernsea-born, Cerutti-trained Becky knows seafood, and she credits “one man and his net” Frank Powell with supplying the finest crabs from the Yorkshire coast.

With crab salad and vegetable stroganoff duelling for Jayne’s main course attentions – as she also debated whether she had room for a starter – Becky offered the solution of a small crab salad.

Greedy and in crabba-dabba-doo mode, I rather fancied a taste of that in addition to the crab thermidor which was my choice after establishing I was a day too late for the lobster cocktail. But Jayne declined and instead assisted me, thankfully not too much, in making short work of a ramekin dish full of white and brown crab meat. Onions, garlic, Dijon mustard and parmesan cheese added a few kicks and, finally, cream completed a richness that was kept under control with a couple of slices of toasted, homemade bread.

The veg stroganoff brought together a colourful combination of mushrooms, peppers and spinach, all soft and full of flavour, with roasted new potatoes helping to soak up the cream, brandy, paprika and Dijon mustard.

My baked cod was thick, flaking nicely and with just a little colour. Roasted hazelnuts added a bit of crunch and a bed of tender stem broccoli took the edge off a broth of mushroom, pancetta and tarragon that wasn’t overpowering but was salty enough to warrant close inspection of Becky’s dessert menu.

Having raided a bit of my main course bread to mop up her stroganoff, Jayne absolutely definitely didn’t want any pudding whatsoever and certainly wouldn’t thank me for a tiramisu – even one with raspberry sauce – or a lemon posset. She never eats dark chocolate, least of all with orange, and gooseberry fool would just be too, well, gooseberry-y.

So she only had a couple of mouthfuls of my cherry cheesecake with white chocolate ganache, cherry sauce and almond cluster. Crunchy, creamy, with a nicely marbled top and a measured sweetness that relaxed the tastebuds after the broth.

A half-litre bottle of Paulaner Weissbier from the beer blackboard, followed by a large glass of Ombrellino, necessitated passing the car keys to Jayne, who had stuck to the corporation lemonade. The whole thing cost under £60.

Could be less next time because there are plenty of lower-priced items on the menu including an exciting brunch section served until 3pm. Could be more because there’s smoked salmon from Staal, that crab salad and some very interesting meaty things.

But whether it’s more or less, brunch, lunch or dinner, there will be a next time because the beauty of having a chef working front-of-house is that they come up with ideas like sharing a few mains and sides, or even starters as sides, and taking your time. Which is probably where the roasted cauliflower will come into play, and some more of the wine list.

Take a look at the website – wildsagebeverley.co.uk – for the full menu and check the social media for specials.