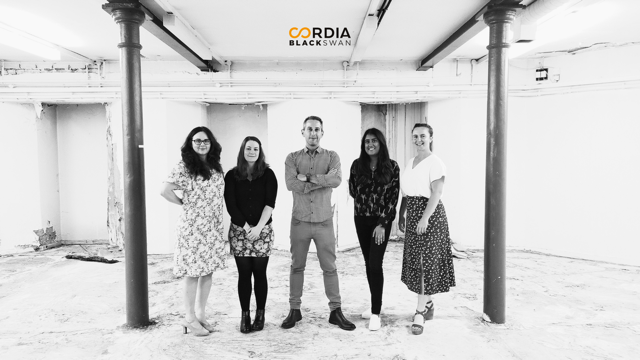 The new hires will play a key role in the delivery of the company’s current and future projects across the city, creating more than 2,000 homes and a range of office and retail spaces.

Andras Karpati has joined as deputy CEO and capital markets director from Cordia Group’s head office in Budapest, where he was international project director for more than two years. Previously, Andras was CEO of Melbourne-based Optimus Development Group and worked on the successful delivery of over 1,000 homes across various major cities in Australia.

Marika Lawrence also joins as new projects director and will be responsible for new site acquisitions and pipeline projects. She was previously associate director and senior development consultant at Thomas Lister and has a wealth of experience under her belt. Marika also previously worked for global logistics provider Prologis Developments as due diligence VP.

The series of new staff appointments further cements Cordia Blackswan’s business growth plans. Through Cordia Group’s acquisition of Blackswan Property in 2020, the CEE property powerhouse entered the UK market as Cordia Blackswan with an ambitious expansion strategy, while maintaining its market leader position in Hungary and strengthening its presence in Poland, Romania, and Spain.

Cordia Blackswan is committed to looking beyond site boundaries and exploring ways of making a positive impact on the wider community. As part of its expansion strategy, the Jewellery-quarter based developer is seeking to deliver a £600 million development pipeline over the next five years.

Marcus Hawley said: “After a strong first half of 2021, we are pleased to be growing Cordia Blackswan with these five new recruits. Each member brings a wealth of experience and knowledge to our ambitious team of experts, and we look forward to taking them on the Cordia Blackswan journey.

“The Birmingham residential market is currently strong, displaying great resilience that has placed it ahead of regional and national growth rates, aligning perfectly with our expansion plans.

“Working with the Jewellery Quarter BID, we will begin to reverse the under-investment that Great Hampton Street has suffered over the years, transforming this key arterial route into an appealing, contemporary urban setting for local people to enjoy for years to come.

“We see massive potential in the Jewellery Quarter which continues to be one of the city’s most attractive residential areas – supporting Birmingham’s ambitions to be a world-class city.”