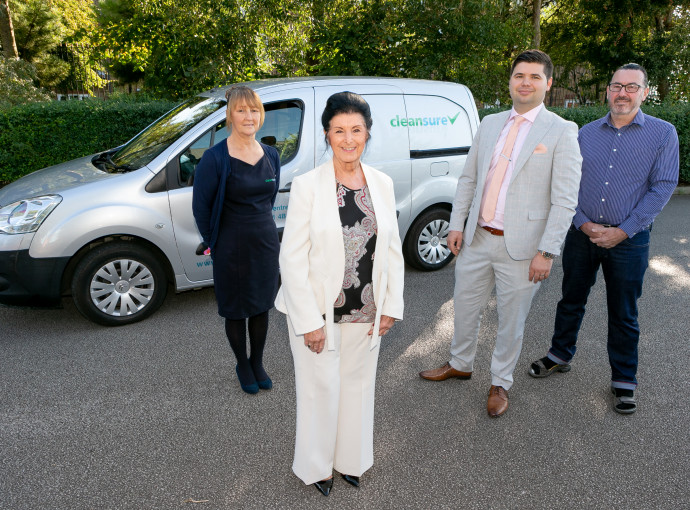 Cleansure, which is based at the Deep Business Centre in Hull, has expanded its contract cleaning and washroom services to offer a full facilities management package in conjunction with the Fox Group, based in Hessle.
The enhanced capability recently saw Cleansure add the headquarters of Spencer Group at Humber Quays in Hull to a portfolio which also includes the Heron Foods distribution centre at Melton.
Cleansure was formed in 2017, more than four years after Janet Green and son Julian sold Ben Green & Associates, which counted ABP, P&O Ferries and KCOM among its blue-chip clients.
The decision to sell was prompted by the death in 2006 of Janet’s husband Ben, with Julian almost losing his life to a stroke in 2012. As Julian recovered, mother and son decided to try again and brought in former colleague Anne O’Brien as operations manager.
In August 2018 they were joined by another director, Andrew Fox, who built up the Fox Group having started his career as a jobbing window cleaner.
With Cleansure’s workforce now in double figures and the Fox Group employing more than 60 people plus sub-contractors around the UK, the partners are building a closer working relationship, with merger a possibility.
Janet said: “We worked together previously by sub-contracting work through Andrew before he became a director and are bringing both businesses closer together to increase our services on both sides – cleaning and facilities management.
“Cleansure provides contract cleaning and washroom services and through Andrew we have been able to bring in window cleaning and, more importantly, building maintenance and grounds maintenance.”
Andrew added: “What we are trying to achieve is a full service for commercial sites and take on the tasks previously done by several different suppliers. It makes things easier and more cost-effective for the clients to have one invoice and one supplier which is responsible and accountable.
“We have just taken on Spencer Group’s premises at Humber Quays with communal areas inside the building, the plaza outside and the three-storey car park. We are also working at the Heron Foods distribution centre at Melton and we hope to increase our work with them.”
Andrew and Julian are also developing Cleansure’s software package, which helps the company manage staff and stock.
Julian said: “We are planning the launch of a new system early next year with a big upgrade on what we have at the moment and on what is being used elsewhere in our sector.”
Janet said: “We’ve grown the business because we have a lot of experience in what we do and because we have an excellent network of contacts who are familiar with the quality of our work and with our customer service, working six or seven days a week. It’s about doing a good job and making the customers happy. It might not be 100 per cent all the time but it’s about putting things right quickly if they do go wrong.
Andrew added: “I started as a window cleaner nearly 20 years ago, doing houses and then moving into more specialised work and bigger premises. We expanded into maintenance and that has gone very well so we are now doing full facilities management.
“There is a lot of competition in cleaning and facilities management and that is one of the main reasons why we are working together, building capacity and operating all over the country on sites from shopping centres to hotels. We also do a lot of work for property management companies, helping them look after their portfolios.”
Freya Cross, head of business and corporate at the Deep, said: “Ben Green & Associates were the first cleaning contractors for the Deep Business Centre until the business was sold. Janet and Julian did a great job of starting again and with Andrew on board are now expanding.  They are operating to the same high levels of customer service and satisfaction that they achieved originally and I am pleased they have chosen the Deep Business Centre as the base for their new business.”