‘Confident young minds’ are our future 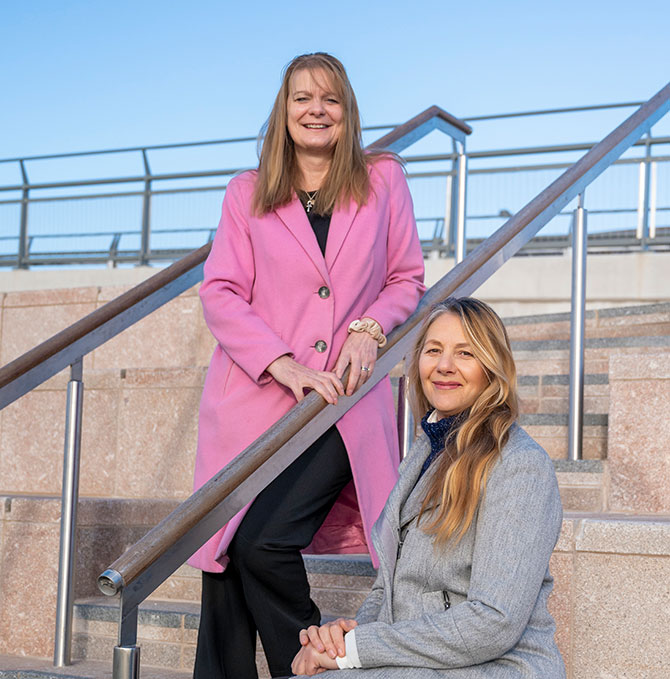 Derbyshire-born Sue Altass travelled the world and ended up in Hull with £20 in her pocket. She tells Sam Hawcroft how her life experiences shaped Inspire Ignite – the business that she founded with Hannah Cheshire in 2014…

Growing up in a rural village in the 1970s, all Sue Altass wanted to do was play sport. But that wasn’t really “what girls did” back then, and her parents were not enamoured of the idea, to say the least.

After taking A-levels in the decidedly non-sporty subjects of geology, economics and politics, Sue was offered a place at university. “They said I could only study to teach sport – I couldn’t just do sport”. They said, ‘Well, you need to think about what you want to do.’ So I said, ‘I’m not going, then!’ And because I’d always wanted to travel, but my parents could never afford it, I thought, I’ll join the forces – and they’ll pay to take me around the world.”

Sue applied to join the military police, and passed all the tests, but then learned that there would be three months until the next intake. So she went travelling anyway.

At just 18, she sold her car, without telling her parents, got a passport and bought a return ticket to the USA. When she finally told her parents, two days before she was due to leave the country, her father said, “You’ll be back within a week!” – which only served to fire Sue up even more. “That was a red rag to a bull,” she laughs.

She quickly ran out of money and ended up working in a ski resort, and after a couple of months her father rang, saying she’d been called up. “I’d never have said this to my dad face to face,” says Sue, “but I said, I’m not coming back – I’m really enjoying it. And that’s exactly what I did. I travelled the States and Canada, Hawaii and all the other islands. But what it taught me was that you’ve got to find things out for yourself sometimes. Don’t always listen to others’ opinions. I’ve got lots of scary stories and some fantastic stories that have made my life colourful. And it was then that I started to understand that I enjoyed being with people – I needed to find some way of working with people to enjoy my life.”

Sue travelled the world for about seven years. “I got back to the UK with 20 quid in my pocket. That was it. Nothing else. And my thoughts from those journeys were that there were people I could do good for. I needed to find a way of working with people.” She’d met a friend in America who lived in Hull (Hullensians get everywhere), and phoned him to ask if he could pick her up from Dover. She didn’t want to go back to her home village, as there was no work there.

Sue “fell” into becoming a psychiatric nurse after being encouraged to try it out by two friends who she worked in a pub with – beginning a career in the NHS that was to last nearly 25 years. “I had eight jobs in the NHS, and every one of them was very different – but it just proves there can be more than ‘a job for life’ – life is what you’re make it. You have to go seeking things.” And then she hit a particularly bad patch where, she says, she was being told to do things that went against all her ethics. It brought back memories of her father’s words all those years ago when she first went travelling. “If someone tells me I can’t do something, I’m going to do it. You have to be true to yourself. I gave up a big salary to go to nothing – but it felt right for me.”

By this time she was a single mother with two children under 10, so she knew she had to provide for them – but she also knew she didn’t want to work for anyone else again. “I didn’t know the first thing about business. I didn’t just want to survive, I wanted to make a difference to people’s lives – people I had seen hit rock bottom because they had no belief in themselves. But I didn’t want to be a counsellor, I wanted to do something different. That’s when I knew I had to put myself with like-minded people – and our journey all started with six people around my kitchen table. One was a teacher, and there was a therapist, social worker, nurse, IT worker – and we all wanted to do something.”

Striking out into the unknown was too big a risk for all but one of them – head of service and former specialist drug and alcohol worker Hannah Cheshire. “She was the one who came back and said, do you know what? I’ve got two kids and a family house to keep, but if I don’t give up my job, I’m going to die of a heart attack. And sometimes when you have that belief in what you want to achieve, and the belief of each other and a connection, then you do make the leap of faith,” says Sue.

Hannah proved the perfect foil to Sue’s spontaneous, headstrong personality. “She really is at the opposite end of the spectrum to me. She started as a risk-averse social worker, she crosses the Ts and dots the Is, and will correct me if I’m wrong. She’s so methodical, unlike me who’ll say, ‘I can do it – and think about it later.’ You can be an entrepreneur on your own, if you’re more balanced, but what we do say – and we teach it all the time – is you have to surround yourself with the people who will make it work.”

Their aim was to work with schools to ensure that emotional intelligence was made part of the educational curriculum. “We’d both been in jobs where we were seeing people taking drugs or alcohol and ending up suicidal because they couldn’t cope with what society had thrown at them,” says Sue. “Kids need to know, from primary school age, what stress management is, what anxiety management is, and how to implement tools they can learn to support their mental well-being – that it’s not scary, and how they can live to their potential.”

Together they wrote programmes for primary, secondary, and sixth form – and managed to begin a relationship with a handful of schools, but few had the funds to pay for the programmes. So they decided that Inspire Ignite needed its own identity – which would be in the form of two characters, Positive Parrot and Negative Newt. “Inspire Ignite is based on the fact that we all have a positive and a negative inside us and it’s who shouts the loudest that gets us to believe who we are,” says Sue.

Through a mutual friend they got in touch with Garry Burnett, author, teacher and perhaps now best-known as the co-writer of the hit production Turn and Face the Strange. Sue says: “We told him the concept – that each book is based on a word, such as ‘choice’, ‘respect’, ‘anger’ – and he wrote the series of eight books, at the end of which the newt becomes a… well, we don’t want to give the story away. It’s all about having the choice to change. Sally Schole, a local artist, was approached and agreed to illustrate the books, and it all came together perfectly.

“We thought that that’d be great way to get into schools,” adds Sue, “but it was still hard.” They then made the school programmes downloadable so schools could run the programmes themselves, but, as Sue points out, there’s little time for this as “teachers are meeting themselves coming backwards anyway”.

Out of this came the plan to set up a charity, Confident Young Minds, which is still in its infancy, but already has a board of trustees. “It’d always been Hannah’s dream to have a charity,” says Sue. “I’d never even contemplated it because it was far too hard work for me!”

With Sue and Hannah managing the charity, their aim is to set the trustees off on applying for funding so they can give the Inspire Ignite programmes to schools and further education. “That would be phenomenal for us – because the ethos behind Inspire Ignite was to have confident young people, they’re our future. They might have eight or nine top grades, but they haven’t got the confidence to knock on a door and say, I’m here for my interview, or look someone in the face and say, this is who I am and this is what I believe in.”

Alongside this, Sue and Hannah run another business, Altass-Cheshire, a specialist mental capacity assessment service. This, too, came about quite by chance when Sue was a trustee on a charity for older people, and a solicitor who knew she was a mental health nurse asked if she’d be able to do a mental capacity assessment, because the NHS was taking months to do it. In typical Sue style, she said yes, and figured she’d work it out later.

“I said, I’m sure we can do it – I just need to find out what format you need a mental capacity assessment in. Never say no! We looked it up and found that there were only five groups of people who could do it, and Hannah and I were in two of those five. And we realised there was a dire need for this service when we saw that the solicitor was being charged an astronomical amount by a consultant in a different county because they couldn’t find anyone to do it.”

They sent out a leaflet to all the solicitors in Hull – and that’s the only advertising they’ve ever done. It grew into a separate business, but Sue and Hannah, having both been responsible for hundreds of employees in the past, didn’t want to go down that road again. “What we do is give people the opportunity to set up their own business, because in Atlass-Cheshire we have associates. The associates receive referrals from us and we support , supervise and liaise with the clients – it’s a different model of a team that we have created.”

Sue and Hannah never expected to end up running two companies, but both have been born out of a spirit of entrepreneurialism and a mindset that they can make a difference to people’s lives. Sue firmly believes there’s no such thing as a failed entrepreneur. But the last word should go to Hannah, who has been in the background of our Zoom call and happy to let Sue do the talking.

“They’re only a failed entrepreneur if they haven’t learned anything.”