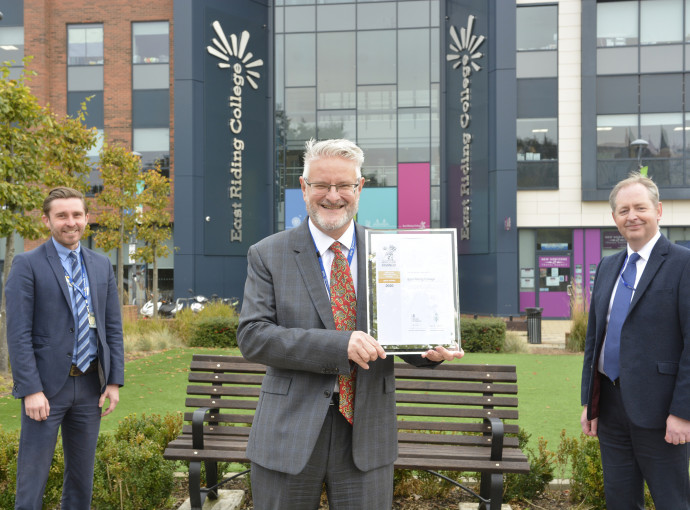 The award recognises employers that go the extra mile to support employees who are ex-forces or part of the wider military family, such as spouses or cadets.
It also acknowledges the college’s work as a training provider to defence personnel leaving the services and the work that the college does to raise awareness among its community, as an advocate for armed forces families.
Mike Welsh, college principal, said, “I’m delighted East Riding College has won the gold award and we are honoured to be involved in the Armed Forces Covenant.  In recent years in particular, we have sought to forge stronger links to support the defence and armed forces community – and our efforts have been recognised through this gold award.
“We are preparing young people to enter the public services and it is only right that we support those who serve and their families as they continue in their careers, and when they return to civilian life. Ultimately, it’s about inclusion, equality and fairness, and we signed the Armed Forces Covenant to mark our commitment to levelling the playing field for armed forces families. For us, this includes initiatives such as guaranteed interviews for ex-armed forces applicants.”
The college works with the Defence School of Transport at Leconfield and has built a partnership that is of benefit to those training and teaching there. The commanding officer at the defence school acknowledged this contribution, which he said they greatly cherished, and thanked the college staff for their dedication and commitment.
The gold award acknowledges the college’s forces-friendly attitude, including the offer of a guaranteed interview for service leavers who meet the essential criteria for jobs advertised at the college. Reservists can also benefit from additional paid leave to attend training, and service leavers can access training at the college through the ELCAS scheme.
The College is working to improve its support year on year, and has established local links to provide careers advice direct to service leavers, as well as working with other organisations such as Hull 4 Heroes, which aims to help ex-forces personnel transition into civilian life and employment.
Pictured: From left, director Paul Smith, principal Mike Welsh, and vice-principal Neil Waterhouse