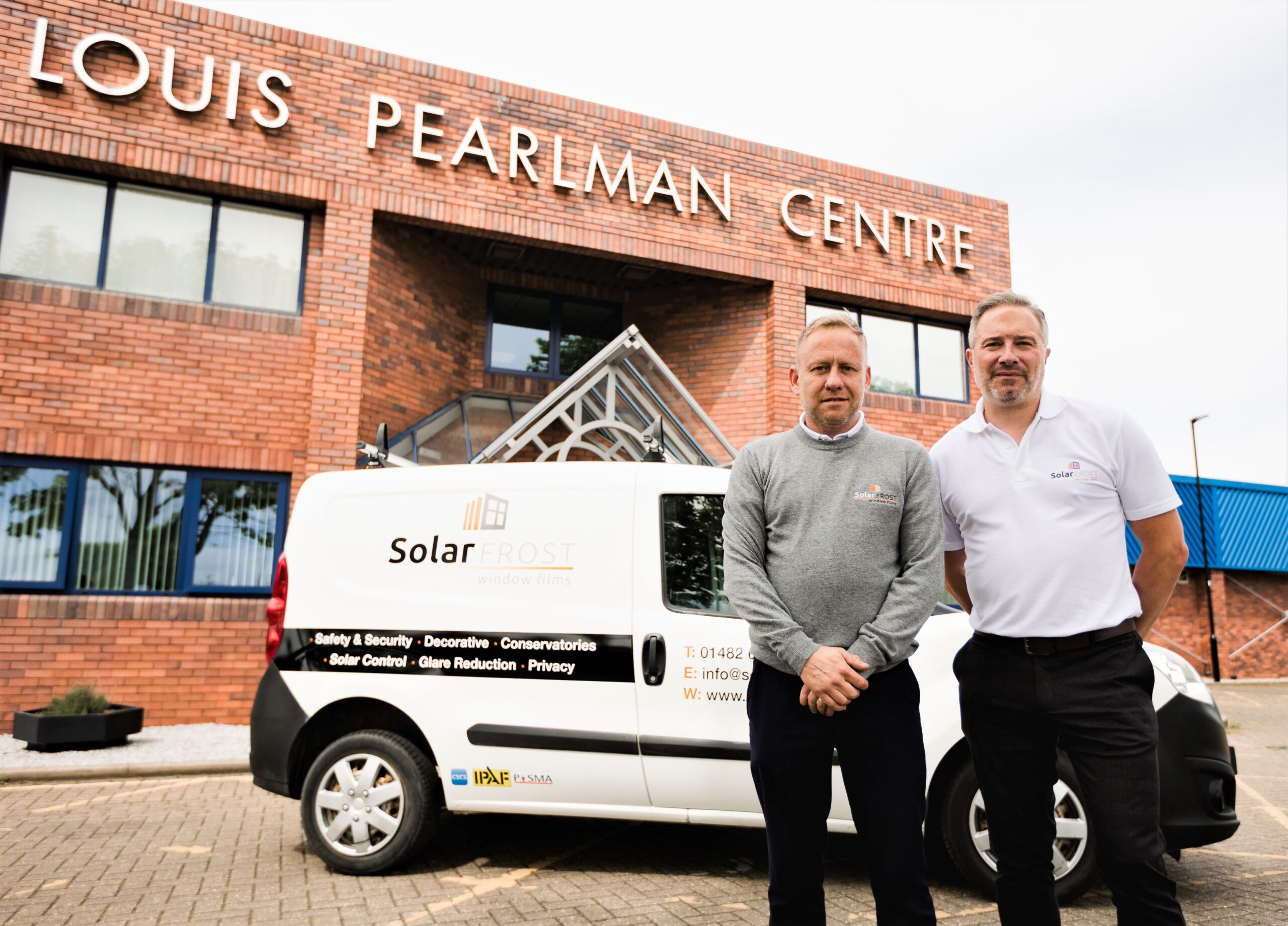 Two colleagues who have spent 30 years between them in the glazing industry are now looking forward to a bright future after deciding to become window film stars themselves.

Steve Oxley and Neil Shearsmith launched Solarfrost during 2021 and are now fully operational after initial delays caused by Covid.

Their work is in demand from businesses ranging from cafes to care homes that are trying to cut energy costs and improve safety.

With products offering benefits including solar heat control, glare reduction and privacy they are also targeting commercial offices, modular buildings, the education and health sectors and the domestic market as well as the tourism sector – notably the huge numbers of holiday chalets and caravans throughout East Yorkshire.

Steve said: “We’ve been doing the same job for 30 years between us, but for other people. Now we’re working for ourselves and focusing on some of the sectors which we know have potential but which were being overlooked.”

The pair recently took their first premises at the Louis Pearlman Centre, the managed workspace operated by Hull City Council at Goulton Street in Hull. From there they operate nationwide, supplying and installing film which will cover window panes and provide a range of benefits.

Debbie Hill, who has owned Coffee31 in Waltham Street, Hull, since 2014, called them in after some of her windows were broken.

She said: “The new film on the windows helps with insulation and with safety – when the windows were broken we had to close for several days to make sure we found every shard of the glass which shattered across the café. The film holds it all together and prevents it flying across the room.

“It’s also crystal clear so passers-by can see the people enjoying their food and drink inside and our customers can look outside. At the moment there are only hoardings across the street but there are going to be big changes round here with the Albion Square redevelopment, and that will bring plenty to admire and a lot of new people to support businesses in the area.

“We’re also pleased to support a new local business. Anybody who looks at our Hull-themed décor will see how committed we are to our city and its people!”

Donna Jenkinson, managing director of the Weir Residential Home and Woodleigh Manor care homes in Hessle, has committed significant investment to coat windows at both sites.

She said: “Woodleigh Manor is over a hundred years old and to meet the regulations at both homes the windows have to be a certain standard. At Woodleigh Manor we would have had to replace every window at significant cost – and there are more than a hundred!

“Safety is a prime concern and the film will help to protect our residents if any windows are broken. Solarfrost have also supplied a privacy film for Woodleigh Manor and will apply it to some of the windows in the ground floor rooms – people can see out but nobody can see in, and that’s a great comfort for our residents.

“We’ve now commissioned Solarfrost to add the film to the roof of the conservatory at The Weir Residential Home to help control the temperature because it can get very hot in there during the summer. It’s all about investing to improve the levels of care and the quality of life for our residents, and the fitting process is straightforward with no disruption to the operation of the care homes.”

Steve said: “The safety aspects arevitally important in a café and other food environments and even more so in a care home where the staff are looking after vulnerable people.

“We’ve also worked with retail premises and cultural sites such as museums, where the film can cut out UV and prevent products and exhibits from fading. We offer a wide range of products and we work with builders as part of construction and renovation projects, with manufacturers of modular buildings and other partners.”

Neil added: “We’ll definitely be sitting in Coffee31 and looking through the windows as the £96m Albion Square development takes shape to see if there are any opportunities for us with all the apartments, offices and shops!”