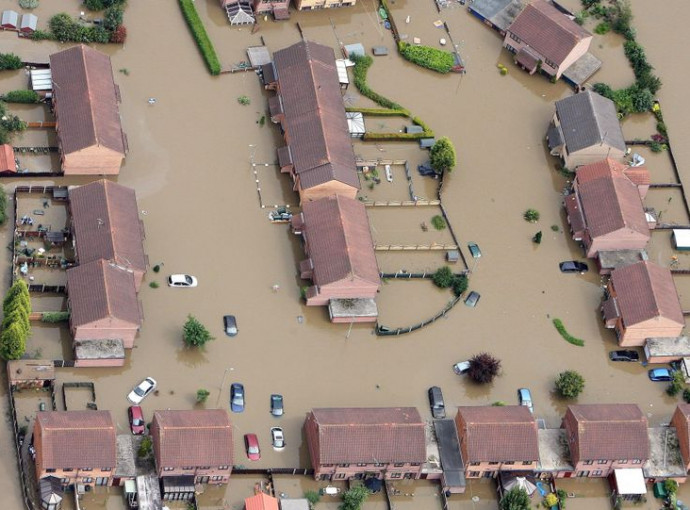 A major new study, commissioned by the Living with Water Partnership and led by the University of Hull, found that more than a third of households surveyed had yet to take measures to better protect themselves from future flood events.
More than 450 households in three Hull areas affected by the 2007 floods were asked about their experiences and responses to the event, which affected 9,000 homes and businesses.
The new study has provided further insight into what measures residents took, and what can be done to protect homes against flooding in the future.
Professor Dan Parsons, director at the Energy and Environment Institute at the University of Hull, said: “Speaking to Hull residents affected in 2007 provided a stark reminder of the impact severe flooding can have on communities.
“At the University of Hull, we are committed to not only learning and understanding more about these extreme flood events, but also how to build greater resilience in communities. Being better prepared for these devastating events can help protect both lives and livelihoods alike.
“Working alongside the Living with Water Partnership, this vital work would prove a crucial role in protecting people from the effects of flooding for decades to come.”
While almost half of those surveyed had ensured their insurance covered flooding, less than a third had taken steps to better protect their property from future events.
Furthermore, fewer than one in 10 had prepared an emergency flood kit and only 6% havd a flood plan in place for their household.
For many residents in Hull, the new survey gave them the opportunity to share their experiences for the first time.
Sam Ramsden, research associate at the University of Hull, said: “Many people were very keen to voice and share their experiences of flooding and views on what could be improved – this is the first time that many people have been asked.
“For those that had been flooded, respondents clearly described the feelings of helplessness, the devastation and the impacts on themselves and their families. While the different flood defences had made some people feel safer, respondents also wanted advice and support on what they could do themselves.
“It was great to discuss the results to the Living with Water partners, who were keen to respond to the findings. For example, Hull City Council has provided direct contact details for its flood risk officer to improve communication and support.”
The Living with Water Partnership comprises Hull City Council, Yorkshire Water, the Environment Agency and East Riding Council. Together, the partnership is working to reduce the risk of flooding in Hull, through infrastructural projects and at a community level.
In the study it commissioned the University of Hull to lead, one in five households said they had to evacuate their homes during the 2007 floods, with 12 per cent unable to return within six months.
Almost a quarter of households also said the floods had affected their work life.
Lee Pitcher, general manager of Living with Water and head of partnerships at Yorkshire Water, said: “We commissioned this study as the Living with Water Partnership believes you can only achieve future resilience by learning from the past. We want to help build communities that live and thrive with water rather than fear it.”
“Living with Water is exploring and driving large-scale blue green engineering interventions to reduce flood risk, but also on a local level, is working hard with communities and businesses to empower positive change too with smaller scale interventions.
“There are some great tools available already to help at a household level that people might just not know exist like signing up to flood warnings, which were implemented after 2007.
“Other measures, such as developing a flood plan and preparing an emergency flood kit can also provide additional peace of mind should the worst happen.”
The study also revealed the long-term consequences flooding can have with a number of households speaking of lasting physical and emotional impact of the floods.
About 20 per cent of respondents said that flooding in 2007 had affected the health and wellbeing of someone in their home.
One resident, who gave birth to her child shortly after the flooding, remembered the events of 2007.
She said: “I remember having to move out while pregnant to the other side of the city, but then having to keep coming backwards and forwards to see the builders and check on our possessions.
“The whole thing was a big shock and very disruptive to our lives.
“Our baby was born while living in our temporary house which was odd because I had envisaged that we would be back home by then, but the work took longer than expected.”
The University of Hull’s Energy & Environment Institute led the study. The Institute comprises of a team of almost 100 researchers, working together to innovate and find new solutions to tackle climate change and its consequences.
Experts at the university have been researching the impacts of both the 2007 and 2013 floods in Hull, as well as public awareness of the extensive flood alleviation measures implemented by the Living with Water partners.
This September, the university of Hull will be launching a new MSc flood risk management course. The programme will focus on finding innovative new ways to increase flood resilience and tackle one of the greatest threats facing the planet.
You can view the Hull Household Flooding Survey Summary Report here.