City centre promises fun for all with street entertainers, market and beer festival 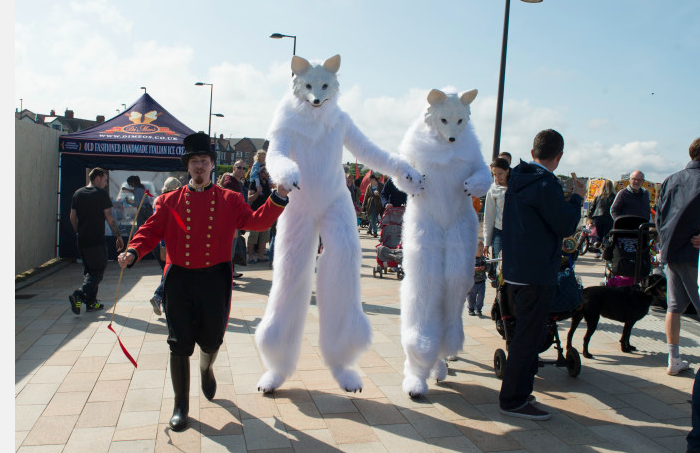 A beer festival, a bustling market and an assortment of street entertainment from monsters of the deep to crackpot comedy shows will add up to a programme of fun for all in Hull city centre this weekend.

Admission to the Hull Minster Beer Festival on Friday and Saturday will be strictly for over-18s but family fun moves to the top of the agenda on Saturday with the return of the Kitsch Market and a whole host of quirky creatures and costumed characters.

The street entertainers will bring down the curtain on the Summer in the City package that presented five weekends of performances in a variety of socially distanced settings.

Attractions have included aliens, acrobats and an array of oversized animals. This weekend the schedule will feature the Raiju dog-like creatures and their hapless trainer creating cute chaos, a spectacular of eccentric dance, circus skills, classic song, and variety routines, plus songs, skills and swordplay from Les Busketeers.

Catherine Goble, HullBID marketing and events coordinator, said: “Summer in the City has proved a real hit with families wandering round the streets and squares in the city centre during the last five weeks and now there’s the added attraction of the Kraken luring people to various locations.

“The Kitsch Market has really taken off since it was launched in May and it should be busier than ever on Saturday with crowds heading to the beer festival in Hull Minster. Altogether it’s a fantastic package of events and activities and we hope people make the most of it and also take the time to explore the city centre shops, bars, cafes and restaurants.”

Julie Buffey, a member of the HullBID board and the owner of the Roisin Dubh vintage and shabby chic shop in Hepworth’s Arcade, will welcome nearly 30 traders to the Kitsch Market on Saturday.

She said: “Once again we’ve got all sorts of different products and we’ve concentrated on traders who bring something new to complement what we already have in the indoor market.

“We must have every type of art and craft that you can imagine with candles, knitting, plants, cakes and more and we’re expecting the beer festival to pull a big crowd.

“Add to that the attractions of the Kraken and all the street entertainers and there really will be something for everyone.”

The Kitsch Market will run from 10am until 4pm on Saturday and Summer in the City will begin at 11am on Saturday with walkabout performances throughout the city centre until 4pm.

The next Kitsch Market on Saturday, September 11, will tie in with Heritage Open Days and the Old Town Festival, with additional stalls located in the Minster.

Julie said: “We hope to have another 10 to 15 traders in September, which is great news because we’re over-subscribed every month and we’ve already got traders booking for December.”