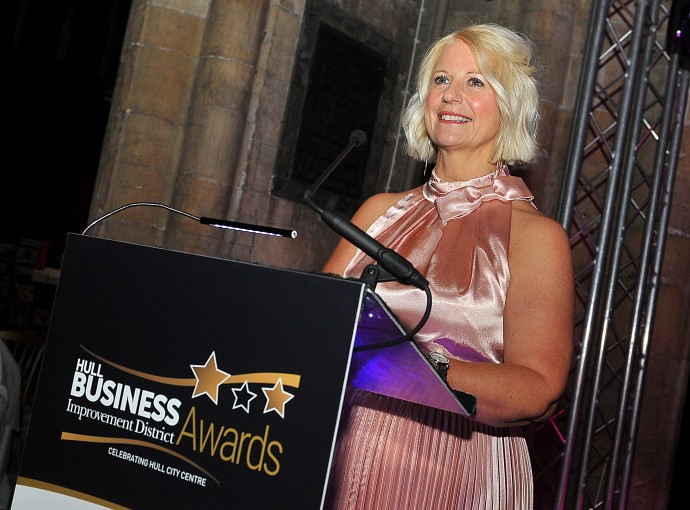 From Victorian arcades
steeped in history and character to a brand new, state-of-the-art events venue,
businesses in Hull city centre celebrated another successful year at the 2019
HullBID Awards.

Contestants and
sponsors illustrated the variety on offer within the city centre business
community, ranging from big businesses to small independent traders and from
leaders in the latest technology to organisations dating back hundreds of
years.

The setting for the
event stood as a symbol of Hull’s transformation, with Hull Minster dating back
more than 700 years and now established as a leading venue for social and
corporate functions.

Kathryn Shillito, HullBID executive director, said the awards have come a long way since they were launched, and she highlighted the buoyancy which inspires confidence for the future.

She said: “We set out
on our journey six years ago to recognise and reward our BID members and the
Biddies, as we fondly call them, were born with a sandwiches and crisps
get-together. Now we’re here with a black-tie dinner and 240 guests. Quite
amazing!”

Kathryn spoke of the
challenges which HullBID and its city centre partners have faced since she
joined the organisation 10 years ago as Operations Manager, and of the united
approach which has bucked the national trend in terms of some key indicators.

She said: “We are
already witnessing a steady increase in footfall with the number of empty units
decreasing. Investors needs to know the city is a good option and the BID
continues dialogue with developers and property landlords to portray everything
that is good about Hull.”

Kathryn revealed that
business rates revaluations and the conversion of commercial space into
residential accommodation have been major factors behind a reduction of 30 per
cent in HullBID’s levy income since 2015, but in response BID has generated 40
per cent additional income through its innovative approach to securing grants
and event sponsorship.

She said: “That amount
is increasing. We don’t take it lightly that you have entrusted us to spend
your hard-earned money. Times are tough for businesses and we need to make a
difference. Funds that are reinvested make the city centre a safer, cleaner,
more vibrant place.”

HullBID Awards 2019 held at Hull Minster; all the nominees and award winners

Kathryn highlighted the
work of the HullBID team, striving to make the city centre streets safer and
more secure, taking a hands-on approach to remove graffiti and unpleasant
waste, liaising with businesses to identify and meet their specific needs and
delivering a programme of events which informs, entertains and attracts
thousands of people into the city centre.

Partnerships with
Hull City Council and Humberside Police are long and productive. A networking
lunch hosted by HullBID for the Young Professionals’ Network signals the work
being done to attract young talent to Hull, and to keep it. An alliance with
the Bonus Arena will see the best of Hull’s independent beauty and fashion
retailers support their Beauty Expo in September.

Kathryn said: “The aim
of the HullBID team is simple ­­– to support businesses and improve the trading
environment.”

She added that the
achievements of city centre businesses were reflected in the “unprecedented
numbers” of nominations across all 10 awards categories and the acknowledgment
of the independent judges that the standard was higher than ever.

Stuf, a technology and
gadget sales and repairs business which has moved three times in South Street,
starting with the smallest premises and now occupying the largest, won the Best
Business Progression Award sponsored by Princes Quay.

Tapasya @ Marina Indian restaurant won the Commitment to Training and
Development Award sponsored by Kingston Recruitment in recognition of their
investment in new employees.

Special Stars Foundation, which puts on a wide range of inclusive and accessible
activates with the aim of reducing social isolation, won the Contribution to
the Community Award sponsored by Hull Minster.

Iconic joke shop Dinsdale’s, which is based in Hepworth’s Arcade and has
been putting smile on faces for 85 years, was the winner of the Customer
Service Excellence Award sponsored by the Hull Daily Mail.

Paragon Arcade was recognised as owners Allenby Commercial picked up the
Dressed to Impress Award, sponsored by Hull College, for their renovation of
the Victorian units and for their regeneration of other key city centre
buildings including Hideout Hotel and Danish Buildings.

The Innovative
Marketing Award sponsored by 360 Chartered Accountants went to the Bonus Arena
for its activities in promoting the venue and events since opening last summer.

Leanne Barry, who works
at the Venue Café in Hull Central Library, won the Outstanding Employee Award
sponsored by APCOA Parking after judges heard how she is even learning new
languages to support her customers.

The Civic 1 CCTV team
won the Safe City Award sponsored by Radphone for their role in enabling people
to feel and stay safe in the city centre.

The Best in Food and
Drink Award sponsored by Saunts Parties and Events went to Atom Brewing Co @
The Corn Exchange, which stocks more than 200 beers to complement food made on
the premises.

The Outstanding
Contribution Award sponsored by St Stephen’s Shopping Centre was presented
to B. Cooke and Son, which was established more than 150 years ago and
provides navigational charts and publications for shipping across the globe in
paper and digital form, as well as selling and repairing clocks, compasses and
barometers.

Paul Green, co-founder
of Stuf, said: “It’s nice to be recognised, especially amongst our peers. We
are a BID business and we have been to every awards ceremony. This year they
raised the bar again and we were happy enough to be nominated in a very strong
category. When our name appeared on the screen we just thought: ‘Wow!’”.

Mukesh Tirkoti,
Managing Director of Tapasya @ Marina, said: “We have always worked very hard
on the training and development of our team and we are very, very pleased that
we have been recognised in the HullBID Awards.

“There are many
fantastic businesses in the HullBID area and the competition was very strong.”

The Best in Food and Drink Award (sponsored by
Saunts): Atom
Brewing Co