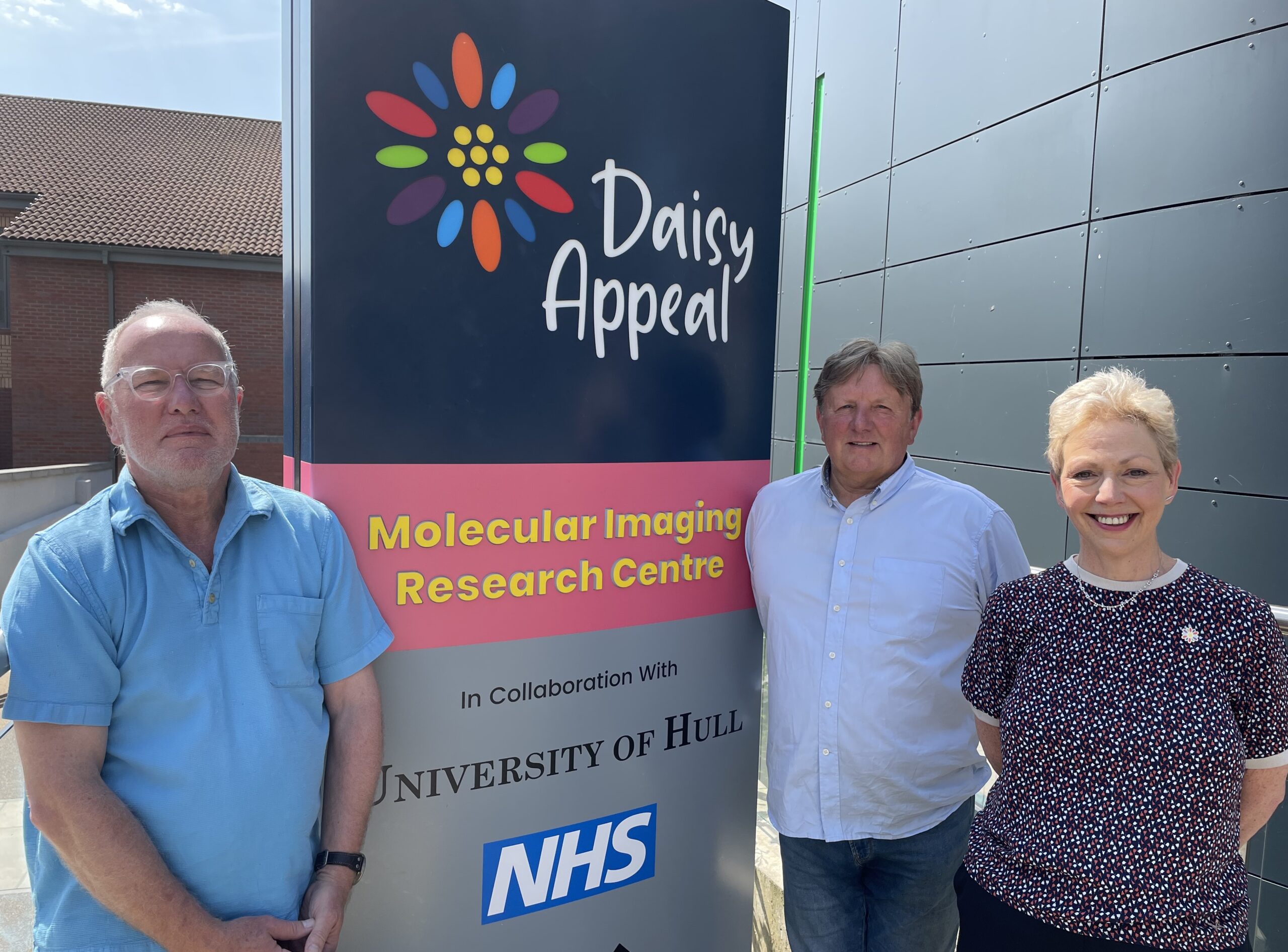 The head of an organisation representing more than 1,000 businesses across the Humber area has pledged to help raise awareness of the work of a regional charity that is transforming detection techniques for serious medical conditions.

Mike Whitehead, president of the Hull and Humber Chamber of Commerce, said he particularly planned to introduce businesses in Northern Lincolnshire to the Daisy Appeal, which is tackling cancer, heart disease and dementia by offering quicker diagnosis, better treatment and improved quality of life for thousands of people every year.

Mike made the comments after visiting the £8.8m Molecular Imaging Research Centre (MIRC) which is currently being fitted out at Castle Hill Hospital and will establish the site as one of the top PET-CT providers in the UK. Mike also renewed acquaintance with Professor Nick Stafford, chairman of the Daisy Appeal and a colleague from nearly 30 years ago.

Mike said: “I was general manager critical care and surgery and Nick was professor of head and neck surgery and he drove the research projects which over the years led to the work supported by the Daisy Appeal.

“I have kept abreast of what Nick and his colleagues have been doing here and I think it’s amazing that they have taken our little corner of the world into the Premier League for cancer care and treatment in the UK.

“The Daisy Appeal has been pivotal in creating a fantastic partnership between the Hull University Teaching Hospitals NHS Trust and the University of Hull which benefits people across the Humber region – not just in Hull and East Yorkshire.

“I want to help to raise awareness among businesses in Northern Lincolnshire of what the Daisy Appeal is doing to help them, their colleagues and their communities – and what people can do to support the vital work.”

Since its foundation in 2002 the Daisy Appeal has raised more than £22m. The Daisy Appeal Medical Research Centre opened on the Castle Hill Hospital site in 2008 and was followed, in 2014, by the opening of the Jack Brignall PET-CT Scanning Centre, housing the first in a new type of Siemens scanner in the country.

Once up and running the new MIRC will initially be able to produce Fluorine 18 radiotracers, which are currently used in most scans but which are made elsewhere in large scale production units. During the next two or three years the centre will also be able to produce Carbon 11 radiotracers, which have great potential for neurological and cardiological use and will open up other opportunities.

Nick explained how the new project led to the University of Hull becoming a member of the elite UK PET Network, joining Imperial College London, King’s College London and the Universities of Cambridge, Cardiff, Edinburgh and Oxford. He added that work is also attracting interest from organisations including the Medical Research Council and Cancer Research UK.

He said: “We have strong relationships within the regional business community and we see the Chamber as a key partner in helping us to build on that so it was great to be able to welcome a business leader who I have known for a long time and who has an excellent understanding of our work.”

Claire Levy, fundraiser for the Daisy Appeal, said: “With its membership of large and small businesses the Chamber is an important partner for us, not least because of its presence on the south bank of the Humber.

“We want to make people aware that although our facilities are based at Castle Hill Hospital we are treating patients from across the Humber region, and by supporting the Daisy Appeal a business is investing in world class medical facilities which can make a huge difference to the lives of employees and their families.”