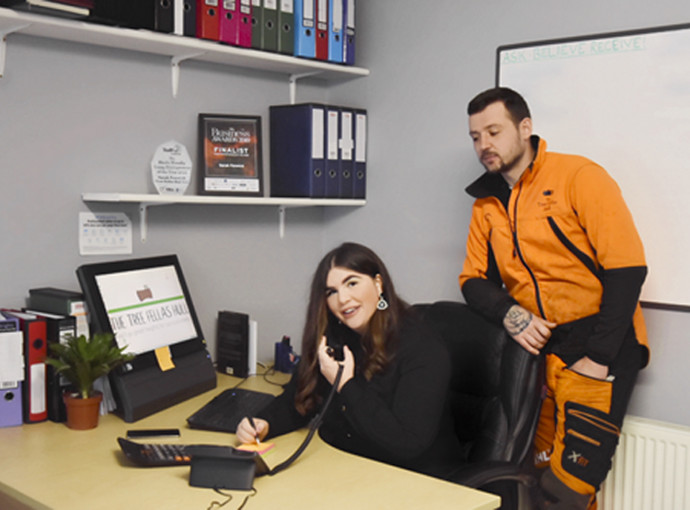 Sarah Fenwick, who with her partner Gareth Pennington managed to escape the issues around homelessness, drugs and mental health that trapped many of their family members, is down to the final two in the International Association of Bookkeepers (IAB) Student of the Year Award.
Sarah will find out whether she is the winner when she heads to the awards ceremony to be held at the House of Lords terrace On Wednesday, March 18, with Gareth accompanying her on their first visit to London.
She said: “We are going to make a real day of it. We’ll be travelling first-class and we’ll take a lot of pictures! We’re looking forward to seeing Buckingham Palace and the London Eye and to meeting the people who were on the IAB interview panel because they were also lovely.”
Sarah and Gareth met in a care home in Hull in 2005 and later lost touch. But they were reunited after Sarah moved into her own place when she was 18, and they started to build their relationship and believe in a brighter future.
Gareth joined Hull City Council on a care leavers’ scheme, gaining a diploma in horticulture and qualifying as a tree surgeon. He left his job early in 2019 to set up Tree Fellas, which now has a team of five offering all types of tree care, maintenance of trees, tree pruning and launching a huge campaign around tree planting.
Sarah pursued a career in credit control and then moved to KCOM, the Hull-based communications and IT services business. Even with two young children at home she held down her KCOM role while also building Tree Fellas and studying for her Level 1 and Level 2 qualifications.
She left KCOM in late 2019 but still holds a second job, having taken the role of Young Person’s Youth Enterprise Champion, which gives her the chance to use her real-life experiences to help others.
She made contact with the Hull-based John Cracknell Youth Enterprise Bank, which paid for her Level 1 training, and with HCUK Training, which secured funding for Level 2. The training was provided by Golding Computer Services in Hull, with Di Garbera, a director of the company and IAB Tutor of the Year for 2019.
Di said: “Sarah’s story is amazing. In a little over a year she’s secured the two qualifications, set up the business with Gareth, completed a year’s trading and changed jobs as well.
“Sarah told me that 10 years ago she probably used her past as an excuse because she didn’t think anybody from her background could do the things she dreamed of doing. Now she knows that no matter what your background you can still reach for the stars.”
Sarah’s awards application included testimonials from Charles Cracknell, Youth Enterprise micro-business manager at Hull City Council, and Sean Royce, managing director of KCOM.
Charles said: “Sarah has overcome a wide range of disadvantages and, as a former care leaver myself, I know how those experiences are always with you. She has certainly ensured she is not a prisoner of her past and by working with Goldings has shown what can be achieved.”
Sean said: “We were sorry to lose Sarah as a colleague but are delighted at what she has achieved in establishing her own business and supporting others who are seeking to do the same.”
Sarah said: “I was surprised and really excited when Di said she wanted to nominate me for the award because it’s something I wasn’t aware of and I didn’t expect it. When I read the testimonials I was blown away that two such influential people would speak so highly of someone like me.
“I did an interview with a panel of four or five judges and it went really well. They asked me a lot of questions and gave me some good advice. Now it’s a case of wait and see but we both think 2019 was just a blast and nothing could really top it but it looks as though 2020 could be another great year.”