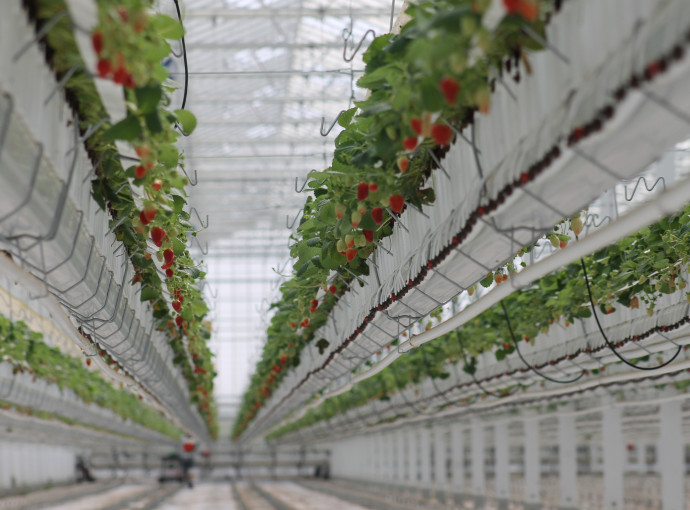 The new six-hectare glasshouse packaging and cold store facility in Carrington, near Boston, will be able to produce 750 tonnes of strawberries at any one time, providing “the highest-quality local strawberries all year round”.
Project leaders say the development will be a “first of its kind for size, complexity, sophistication and green credentials” in the UK horticulture market.
It will see heat generated from the current on-site anaerobic digester biogas plant, where maize and rye silage is converted into energy, stored and used as and when required in glasshouse enabling major energy savings.
Bio-gas will also be extracted, cleaned and converted into C02, to be used to enhance the growing environment and improve crop yields inside the glasshouse.
Methane gas, which is already created by the anaerobic digestion process, will be used to create electricity to power the glasshouse – and power more than 7,700 homes – through a specially built Combined Heat & Power (CHP) system.
The site will even be self-sufficient in terms of water usage, with the entire site harvesting rainfall to be reused in irrigation systems.
The project has been confirmed following a year of planning between Beeswax Dyson Farming, which is owned by inventor James Dyson, and CambridgeHOK.
Now, with planning permission secured, work on site is now due to start with a target of production beginning early next year.
Ross Hibbs, commercial director at CambridgeHOK, which is based in Newport, East Yorkshire, said: “This is a huge development in the UK horticultural sector as this development is the first of its kind in its sheer size, complexity, sophistication and green credentials.
“We are extremely proud at CambridgeHOK to have worked alongside Beeswax Dyson Farming over the past 12 months to bring this project from initial concept to the stage where we will now embark on making it a reality.
“This project will use cutting-edge techniques and technology to produce the highest quality British grown strawberries all year round, something our leading brand supermarkets and local distributors are desperate to see – as are consumers.
“It will also be the most energy-efficient and green development of its kind. We are all very excited at what is ahead over the coming nine months.”
CambridgeHOK will oversee the design and onsite construction and development of the glasshouse, which has been manufactured by its long-term partner and world-beating Netherlands-based specialist, Havecon.
Mr Hibbs says securing the huge project is a huge vote of confidence in CambridgeHOK and its industry-leading reputation.
“Beeswax Dyson Farming has a reputation for being a modern and hi-tech farming business which is committed to producing the best produce in the interests of the both customers, and the environment, for the long-term,” he said.
“We are delighted that we were the chosen firm to deliver this vision for them and have led this project from concept, through planning and now into development.”
Levelling and profiling work is expected to start next month, as will piling, with around 1,800 concrete piles required to support the development.
As well as the glasshouse, CambridgeHOK will construct a 1,500sq metre packing and cold store facility, where strawberries will be housed and made ready for collection and delivery, as well as a portal frame building which will house office staff, kitchens, and restrooms.
It will also be responsible for the construction of access roads, car parking and lighting across the new site.