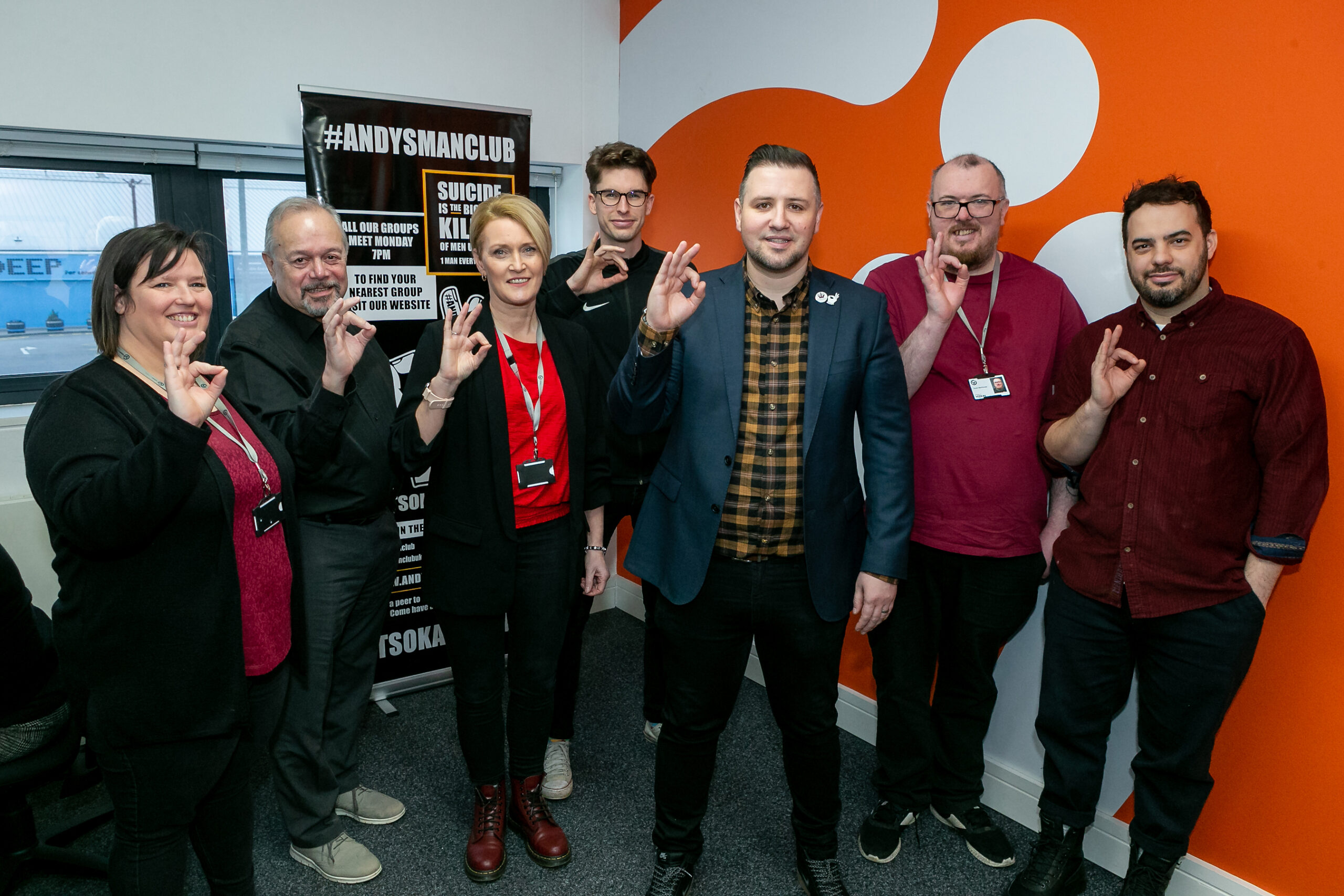 A charity that was set up to tackle the stigma around male mental health has received a double boost with a year-long commitment from its business neighbours and the opening of a new support centre.

Andy’s Man Club was founded in Halifax by Luke Ambler and Elaine Roberts after the tragic loss of Andy Roberts, Elaine’s son and Luke’s brother-in-law. It recently opened its fifth facility in Hull where men can seek help with their problems from others who have experienced similar issues.

The new centre will be funded in part by donations from Vizion Network, the UK’s biggest motor repair management company, after staff at its headquarters at The Deep Business Centre selected Andy’s Man Club as their charity of the year.

Vizion Network employs about 100 people in its three offices at The Deep, which is also home to Think Cloud, a specialist IT support and cyber-security protection business where one of the directors, Leon McQuade, is a founder of Andy’s Man Club in Hull.

The Vizion Network team also became aware of the benefits of Andy’s Man Club through one of their staff, Kev Northorpe, who has first-hand experience.

Kev said: “In 2019 I was in a bit of a dark place. I lost a really close family member and I was recommended to go to the club. It really helped me get through a lot of my personal problems and go back to work, and I feel eternally grateful to them for helping me do that.

“Andy’s Man Club is a really powerful movement. It gives you so much strength knowing other people are going through the same kind of problems or worse – they put their arm around you.”

Kelly Cawthorn, operations manager at Vizion Network, said the staff have been selecting a charity of the year for the last five years and will raise money from raffles, bake sales and other events which bring colleagues together.

She added: “We had heard about Andy’s Man Club but we didn’t know they had a presence downstairs at Think Cloud! Some of the staff here have attended Andy’s Man Club meetings and most of the guys suggested it for charity of the year.”

The Deep Business Centre will support the initiative by rolling out the fundraising opportunities throughout the other clients, embracing more than 40 businesses which between them employ more than 200 people.

The business centre also supports Jo Kent, the lead for suicide prevention at Humber Coast and Vale Health and Care Partnership, by providing facilities for virtual meetings and by raising awareness through social media.

Freya Cross, head of business and corporate at The Deep, said: “We hold quite a few events every year to raise money for various charities and we didn’t hesitate to commit to supporting a cause which is so close to two of our businesses and their staff.”

Jo also helps with running the First Ladies Club, a spin-off from Andy’s Man Club which has three centres in Hull and has just opened in Grimsby.

Jo said: “Andy’s Man Club recently opened its fifth centre in Hull at the emotional wellbeing hub which is open three mornings a week and is run by volunteers, offering coffee, a chat and signposting to other agencies if people need help.

“People who are feeling lonely, isolated, worried about someone or having a few issues themselves, can just walk in there and  have someone to talk to and who will listen to them.

“It’s incredibly important to have this support. It helps to fund the clubs and it helps to raise awareness. It’s not medical. It’s just going for a chat with nobody sitting in judgment and it’s confidential. Kev’s story will encourage other men to go along.”

Andy’s Man Club was founded in Halifax in 2016 and now has more than 80 centres nationwide, including more than 30 across Yorkshire. Leon opened the first Hull branch in 2017 as a gathering of six people, and numbers have increased to more than 100.

Leon said: “We love to hear the stories from people who have used Andy’s Man Club about how amazing is it to be able to find a safe space where they can talk about their problems without stigma and embarrassment.

“The money from Vizion Network will help Andy’s Man Club to grow locally, for example with the new hub, and nationally as we reach more people.

“Kev’s story shows how we supported him to the point where he could come back to the workplace and talk about the problems he had experienced. That’s a really important message which helps to raise awareness and encourages the next man to walk through the door.”

Kev added: “It was easy to get colleagues on board to vote for Andy’s Man Club as our charity of the year when I explained what the club does. It’s not just a club for men. It has an effect on your entire family. Everybody has a relative or someone who has been affected by mental health.”

To find out more about Andy’s Man Club visit andysmanclub.co.uk or the Facebook Page at facebook.com/Hullandysmanclub. For more information about Think Cloud, visit think-cloud.co.uk.