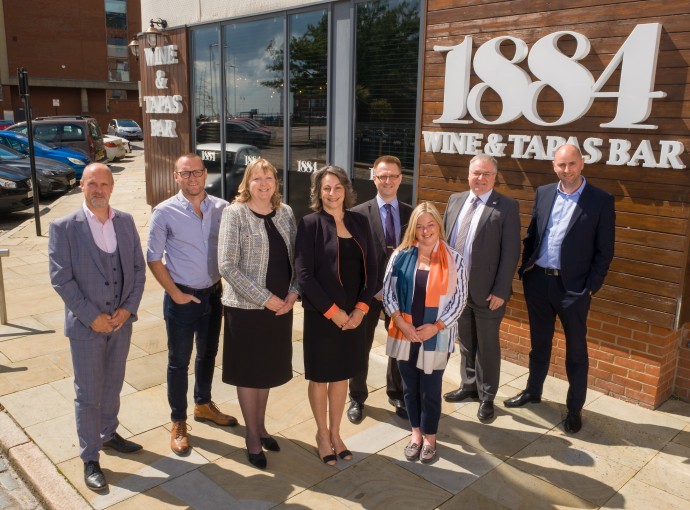 Surviving members of the Hull Business Angels are seeking more local businesses to join them with the aim of harnessing culture to continue the regeneration of the city. They hope interest will be ignited by Humber Street Sesh which, with the help of the Angels and other sponsors, expects to attract about 40,000 people to a music festival in Hull’s marina area during the first weekend in August.
Andy Capes, office managing partner at RSM UK in Hull, said: “Humber Street Sesh is a fantastic event. It brings the city together. It’s at the heart of Hull’s culture. But the involvement of the Business Angels is not just about business. It’s about continuing to support culture in the city of Hull.
“We want to showcase the festival and promote Hull as a city. We want the businesses themselves to network, show what Hull has to offer and build the city up as a major player. It’s about enhancing brand Hull.”
The Business Angels came together in 2013 as the catalyst for business support for Hull’s UK City of Culture 2017 bid, which was announced as the winner later that year. As 2017 ended, the commitment was continued by RSM UK, Gosschalks solicitors, Spencer Group engineering, St Stephen’s shopping centre, The Deep, Neill & Brown global logistics and F&T Vending.
They have since been joined by Hull City Wide, a partnership of Hull City Council, with Keepmoat Homes, house builders Persona and Strata, and commercial development company Priority Space.
Sponsorship from the Business Angels has helped Hessle Theatre Company to present its productions on the big stage at Hull New Theatre, but the biggest investment is in Humber Street Sesh, which will take place on 2 and 3 August.
The Sesh was launched in 2001 in a pub in Hull and still takes place every week. An additional event in the old warehouses of Humber Street in 2012 was intended as a “small”, free festival but attracted 10,000 people and became annual.
In 2018 it expanded to the western side of Hull marina and became a two-day event. The audience has grown in spite of the introduction of admission charges, with 40,000 people attending over the two days and local hotels reporting a 20 per cent rise in business. Social media stats show a reach of 1.6 million people on Facebook and a Twitter following of 10,700.
This year Humber Street Sesh will again take place over two days and will feature more than 200 bands including Friday night headliners The Hunna. Weekend tickets cost just £25, with organisers able to keep prices down because of the growing support from sponsors.
It’s a big weekend for bars and restaurants in the Sesh zone and around the city centre, and particularly for the two official VIP bars, with Humber Street Distillery joined this year by 1884 Wine & Tapas Bar.
Deborah Spicer, director of 1884 Wine & Tapas Bar, said: “We’ve been here nearly 10 years and we’ve watched Humber Street Sesh become the biggest cultural event in the region.
“In the early years we were on the perimeter but now we’re in the thick of it. We know first-hand, and from talking to our business diners, how important the Sesh is to the city’s economy and we’re looking forward to being involved this year.”
Justine Peacock of Humber Street Sesh said: “The fact that the VIP bars are sponsored by ADJ Surfacing and Consultancy, who are based in Doncaster, shows that interest in the event extends way beyond Hull.
“It also shows the opportunities we have to showcase the festival and Hull as a city. Sesh is a talent pipeline for the performers and for businesses from across the north. The businesses can help us take the name of the festival across the country. We can only do that with the help of the sponsors, and the Business Angels have been amazing.”
Andy Capes added: “The idea of the Business Angels was that we got involved in the beginning to bring City of Culture to Hull and now we want to be the catalyst for the legacy.
“Humber Street Sesh is one of the biggest city centre music festivals in the country and it takes a lot to put on. But by combining our efforts we are able to become a major sponsor. We also want to work closely with Absolutely Cultured, which succeeded the City of Culture Company, and augment our relationship with them.”
Lee Corner, chairman of Absolutely Cultured, said: “Building on 2017 is something that it would be almost criminal not to do. We have such an incredible base on which to build continued support for the arts because we saw the impact City of Culture had on the city. Hull and its businesses and people absolutely rose to the event and saw how transformative it could be. We saw the impact arts and culture had on raising our ambitions and aspirations and now we all have responsibility to make sure that these are kept alive.
“Legacy is a collective act and what’s great about what the Business Angels are doing is that they have taken responsibility themselves for making it happen. They have realised the value of culture to the city and done something about it.”
To find out more about joining the Business Angels please contact Phil Withers of RSM UK via LinkedIn at linkedin.com/in/withersphil/
For further information about Humber Street Sesh please visit www.humberstreetsesh.co.uk